Ardent United fan Neil speaks to RedArmyBet about following the Reds home and away for over three decades.

Ned (bizarrely one of the lads years ago said Widnes rugby manager was called Neil Kelly and his nickname was ‘Ned’ and it stuck. Crap nickname).

Where do you sit?

Dad moved from Ireland to Manchester in the 60s and met mum here and they were going United home and away long before I came along. Like most schools in Manchester 90% of our class were Reds growing up. Who else would it be? City? No thanks.

2nd February 1985. I’d begged to go but was met with “there’s too much violence for an eight year old.” They relented and dad took me and my best mate from school. I was spellbound by the thousands of heads bobbing up and down, heading down to the ground, the smells of the burger vans and the noise. Seeing the pitch and what felt like a huge crowd for the first time was the most incredible thing I’ve ever seen.

Favourite player past and present?

Eric Cantona. The love of my football life. Marcus Rashford. Local lad and represents all we stand for. Seems a nice lad and our future long after Lukaku waddles off to Italy.

If you could sign one player right now who and why?

Perisic. United should always play with wingers and our current lack of them is painful.

Highlight as a Red?

Taking away the obvious in 99 and 08 of which I was at both and could go on for a month about, the Juventus semi in 99 was amazing. Being at Alex Ferguson’s last game to more random stuff like countless trips on the monkey bus. Too many really, I could write a book (I should write a book).

If you could go back in time to one game as a Red what would it be? 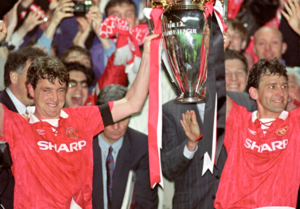 May 3rd 1993. I’d only just left school but already it felt like I’d waited a lifetime to see us win the league. The joy on people’s faces as we got to Old Trafford that night to see us play Blackburn, I’ll never forget. Watching Robson and Bruce lift the trophy was pure relief, joy, pride and one of the best moments of my life.

Worst ground to visit and why?

Portsmouth. No roof, one toilet for 3000 people and a bell end with a drum in the home end.

Best ground and why?

San Siro. Looks like no other ground in the world. In England, Fulham is right up there with the best.

Where will United finish this season?

Jose in or out?

In. I’ve been very consistent on this, he’s not perfect but the football is getting better, the smile is back, late winners and signs that he truly is getting United are promising. Everyone talks about his three year blow up, but given the chance I think a fourth might just bring a European Cup.