But Jose Mourinho has been recruiting much closer to home, too. Tottenham defender Toby Alderweireld has been a regular in the Manchester United transfer rumours while Marko Arnautovic was surprisingly linked with a switch to Old Trafford this week.

Not one many would have predicted, but sometimes, the transfer window throws a curveball, like Chelsea’s surprise inquiry about Peter Crouch in January.

There is, however, concrete evidence to support United’s interest in the West Ham forward as Mourinho was spotted in the stands during Russia’s friendly against Austria on Wednesday night.

Check out RedArmyBet.com for the latest World Cup odds including outright markets.

Sitting alone in a mostly empty part of the stadium, his dark cap not nearly concealing his identity, Mourinho watched with interest as Arnautovic’s Austria beat this summer’s World Cup hosts 1-0.

It all added up. On the same night as Mourinho’s personal scouting mission, Gianluca DiMarzio – regarded as one of the most reliable reporters for transfers – claimed the United boss was there to watch Arnautovic, Fedor Smolov and Aleksandr Golovin.

And it’s the latter that made our ears prick up. Premier League fans are well-acquainted with Arnautovic at this stage. He is a quality player prone to strops and baffling dips in form. He’s adept at hitting on-target shots and crossing, though, as you can see below in Arnautovic’s Player Persona radar, exclusive to our friends at Football Whispers.

Mandzukic and Smolov are established strikers in their own right but would be bought purely as back-ups to Romelu Lukaku.

Golovin, on the other hand, is a different proposition. While it’s perhaps unlikely that United will sign the Russian playmaker in the current window, that Mourinho is keeping a close eye on him is an indicator of the CSKA Moscow star’s recent development and Football Whispers have taken a closer look at him.

Premier League audiences may be oblivious but Golovin is one of the hottest properties in Russia. Having just turned 22 this week, he has popped up in several ‘players to watch at the World Cup articles’ in recent weeks.

But with good reason. Despite his tender years, much of Russia’s hopes of advancing past the group stage largely rest on Golovin’s young shoulders. Having established himself as a key creative influence in Russia’s midfield, the home fans are hoping that he can supply the passes to Smolov – another player attracting Mourinho’s interest – who is the nation’s main goalscoring threat.

That Russia coach Stanislav Cherchesov decided to build a midfield around a 21-year-old Golovin speaks volumes of the player’s immense potential.

And if Golovin replicates the form he’s shown at CSKA then Russia will certainly be worth watching. Mourinho, working for Russian television, will be an interested spectator as Golovin is tasked with unlocking the defences of Saudi Arabia, Uruguay and Egypt in Group A.

At CSKA, Golovin has done that with relative ease. During the 2017/18 Russian Premier League campaign, the youngster completed an average of 43 passes per 90, placing him fourth in division for midfielders. Those passes were often incisive, though, as Golovin averaged 1.41 open play key passes per game too.

This composure and intelligence on the ball have probably piqued Mourinho’s interest, but the United boss will also have been drawn to his dribbling ability, with Golovin having averaged 1.89 successful take-ons per game.

As you can see from Football Whispers’ exclusive Player Persona radar below, Golovin offers something different to Paul Pogba and Juan Mata, two of United’s creative midfielders. He takes even more shots than Pogba – which isn’t easily achieved – and attempts more dribbles. He doesn’t create nearly as many chances as Mata but defends more, a quality likely to impress Mourinho. 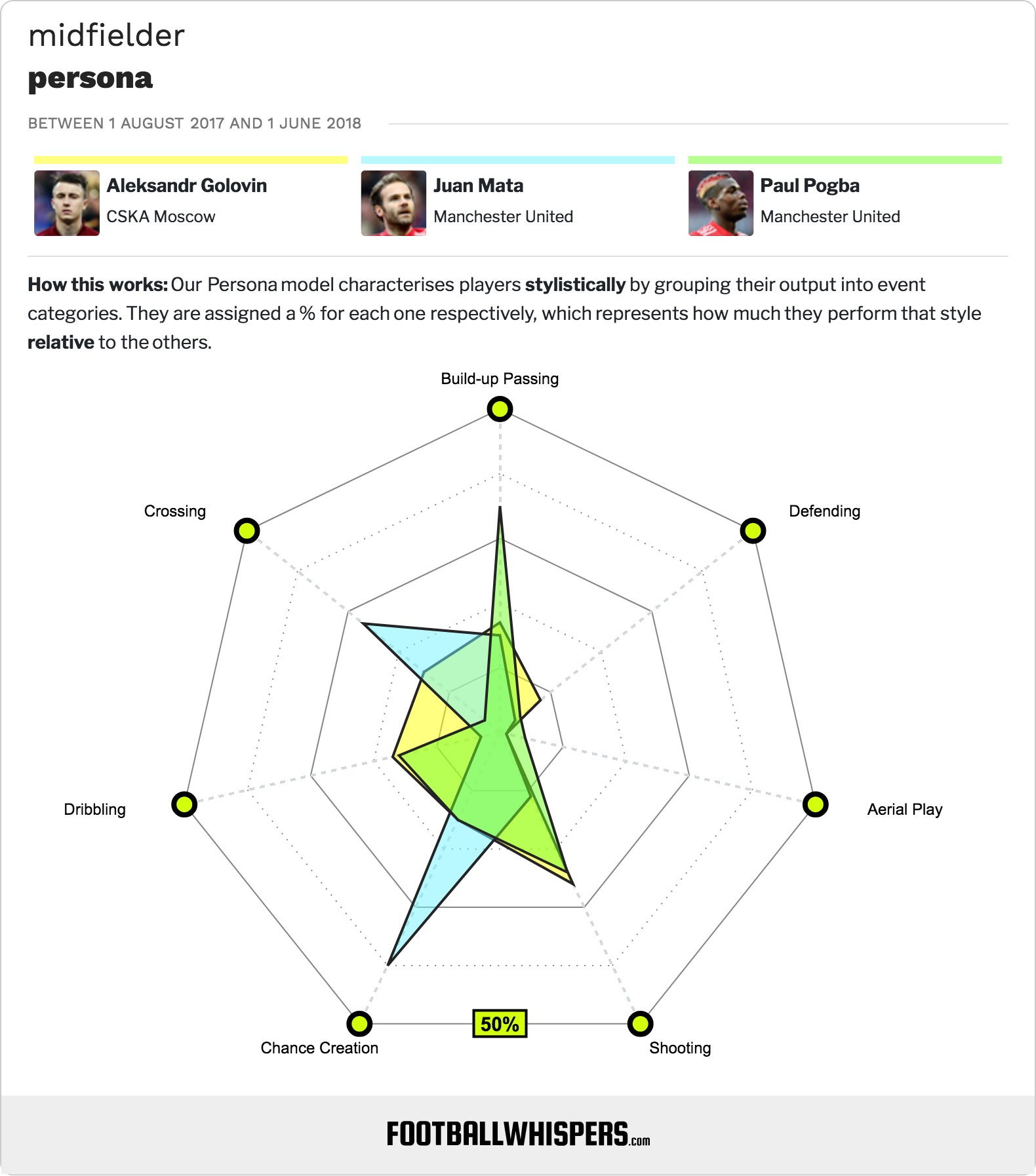 Golovin’s speed and creativity make him a counter-attacking weapon, but he also relishes the challenge of picking apart a deep-lying defence – something he would encounter regularly should he join United. His close control, vision and technical ability make him the kind of keen-eyed creator strikers like Lukaku love playing with.

He’s much more than a neat pass and a stepover, though, and possesses a deadly strike. His two goals in the Europa League this season were sublime efforts: an inch-perfect free-kick into the top corner against Arsenal and a sumptuously curled effort against Lyon.

As an added bonus to his skill-set, Golovin can operate in a number of different positions, either centrally or out wide. With a combination of flair, versatility and immense potential, it’s no surprise that Mourinho felt the need to run the rule over Golovin.

While there is no guarantee that United will pursue a deal for him, it seems like only a matter of time before CSKA’s prized asset bags a big-money move to one of Europe’s biggest clubs.