Football fans look forward to the World Cup all season in the run-up and usually find themselves largely underwhelmed. Not this year.

From Diego Maradona’s bonkers celebration of Argentina’s late goal against Nigeria to Mexico’s emotional win over current world champions Germany, from Cristiano Ronaldo’s hat-trick against Spain to Neymar’s dramatic rolling whenever he got tackled, from Nordin Amrabat letting the world know what he thought about VAR to Michy Batshuayi kicking the ball in to his face when celebrating Januzaj’s goal against England, from the Senegalese fans cleaning up the stadium to their players’ entertaining warm up. For all the goals, the penalty shoot-outs, the celebrations, and the drama, this World Cup has been incredible.

From a Manchester United perspective, we’ve been lucky to see several of our players succeed. Chances are that some of them will return to Carrington in a few weeks with a World Cup winners’ medal around their neck, but they aren’t the players you might have expected at the beginning of the tournament. 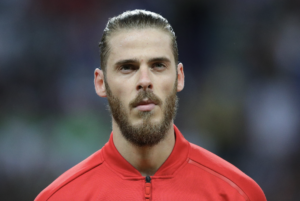 The most likely candidates were David de Gea, Marcos Rojo and Fred, with Spain, Argentina and Brazil among the favourites at the start of the tournament. But Spain were dumped out in the first knock-out round at the hands of hosts Russia while Argentina were beaten by France. Brazil made it to the quarter-finals but were knocked out by Belgium.

That leaves the Belgian contingent of Romelu Lukaku and Maroaune Fellaini, the English lads Jesse Lingard, Marcus Rashford, Ashley Young and Phil Jones, and Paul Pogba still in with a chance with France.

Jones is the only one of these players who has yet to make any mark on the tournament, having only played in the dead-rubber match against Belgium in the group stages.

Lukaku is currently the second-highest scorer in the tournament with four goals and one assist in four appearances.

Lingard is 13/2 with RedArmyBet.com to provide an assist for England vs Croatia.

Lingard won a penalty in the game against Panama, as well as scoring a screamer for himself, as well as assisting Dele Alli’s goal against Sweden in the quarter-finals.

Young has started in all of England’s key games, has delivered some decent crosses, and assisted Harry Maguire’s goal against Sweden.

Fellaini scored the all-important equaliser against Japan in the first knock-out game, before absolutely bossing the midfield against Brazil. Neymar barely got a sniff with Fellaini keeping him in his back pocket all game.

Pogba has played a key role in France’s success too, pinging balls all over the pitch, keeping Lionel Messi quiet, and has impressed manager Didier Deschamps.

Rashford has played a more limited role for England but when he was called upon he delivered. Having never taken a penalty before in his professional career, he put his name forward to be one of the five to take a spot-kick against Colombia and he delivered.

Mourinho has struggled to get the very best out of Pogba and Rashford this season, although it’s worth mentioning the latter made more appearances for United than any other player last season.

The other players still remaining have seen their careers turned around since playing for the Portuguese manager.

Lukaku’s game has come on so much over the past year at United. Not only did he score more goals last season than he ever has, he also claimed his highest number of assists too.

“We are very lucky to have Lukaku with us because he doesn’t need much to score,” said Eden Hazard, Belgium’s captain, last week. “Maybe a few years ago he needed more but not now. This is why he is one of the top, top players. If he has three scoring opportunities, he scores two goals most of the time. His defensive work is very good as well now.”

Two years ago, you couldn’t have even imagined that Young had a future at United, let alone England. In November he made his first appearance for his country since 2013, having thrived under Mourinho playing in a left-back role.

Fellaini was a laughing stock for the first few years of his United career. That’s not to say that he doesn’t still divide the fanbase, because he does, but he’s a much better option now than he was under the two previous managers. Mourinho’s a huge fan of his, for some reason, and that has enabled the midfielder to play to probably the best of his ability. Many reds would argue Fellaini’s best still isn’t good enough, but having watched him at this World Cup, he’s almost unrecognisable from the player he was under David Moyes at United.

Marouane Fellaini to score with a header for Belgium v France is 9/1 with RedArmyBet.com

Finally, the largest and most impressive transformation has been that of Lingard. He took his time to realise his potential but after being given regular playing time by Mourinho, trusted in the big games, he’s really come in to his own. He’s proven to be one of England’s most important players this tournament and he credits Mourinho with his progress.

“Mourinho has been great with me,” Lingard said last week. “He’s put that trust and faith in me to play me in big matches week-in, week-out. It’s only up to me to repay that faith by playing well and putting on good performances. He’s played a massive part in my development and I can only thank him for that.”

Yet you don’t hear praise for Mourinho for the impact he’s had on these players from outside of the club. Rival managers are hailed for developing their players but it doesn’t fit the narrative when it comes to Mourinho.

Any United player to score in the World Cup final is 5/2 with RedArmyBet.com

The fact that he’s managed to coach a whole host of misfits and players who have been repeatedly written off, and see them come within reach of football’s top prize, is worthy of applause, but he’s unlikely to receive it.

Mourinho’s pay-off will be if his players return as world champions and have all the confidence that comes with such a title. United need to hit the ground running next season and that can only be aided by having so many players who have enjoyed a brilliant summer. Whether they end up winning the World Cup or not, there are plenty of United players who can be proud of their accomplishments in Russia and hopefully they will bring that renewed hunger back with them to Old Trafford.

Check out all the latest World Cup odds including special bets at RedArmyBet.com