One match going United fan, fills the international break with something a bit different.

I was in New York for a few days on a jolly with a couple of my mates recently and we wanted to watch some basketball or baseball but there were no games on in NYC whilst we were there. The only event happening during the weekend was MLS [Major League Soccer] – New York City Football Club V DC United. I thought it would be a great opportunity to see Wayne Rooney in action. David Villa is captain of NYCFC and it would be interesting to see how England’s top goal scorer fared against Spain’s top goal scorer. I think the last time these two faced each other was at Wembley in 2011 and we all know how that ended!

Tickets were around $56 per person. I got them easily on TicketMaster, they were readily available.

I was with two friends (one male/one female) who have no real love for football but have been to a few Premier League/championship games. I bribed them with alcohol and food.

RedArmyBet are the only bookmaker committed to sharing 50% of net profits directly with United fans.

The stadium is quite far to get to from Manhattan and if you want to tackle the subway then that’s the cheapest option, but we just got a cab. Cost us around $25.00.

The game was at the Yankee Stadium in the Bronx in New York.

The difference between watching MLS and the Premier League is HUGE. The biggest difference is the passion/buzz/excitement or lack of it. When you go to Old Trafford you have a sense of excitement regardless of who you are playing against. There is usually a buzz around the stadium.  The crowd in general are “up for it”. Here, there was nothing. A lot of the turnout was to see Rooney and there were so many Rooney Man United shirts and flags around. People holding up Rooney banners and people calling out his name.

The atmosphere wasn’t great. I think there were around 28,000 people in attendance. The stadium can hold up to around 47000. There was the odd applause and chant of “NYC, NYC” but other than that nothing else. There is a stand opposite from where I was sat that had a bloke with a drum. That stand seemed to be enjoying themselves. Maybe that’s where the “ultras” sat.

It was very City-esque, in that the kits are similar they have about the same number of empty seats. I took a disliking to NYCFC immediately.

The stadium was mixed and there were plenty of DC United Fans sat with the New York Fans. No animosity, no tension – maybe the odd “you suck” when DC Scored but apart from that nothing. There were plenty of kids and there was a camera man walking through the stands filming the children and putting them up on the large screens around the stadium. You can see that the MLS is geared up for families and kids.

The part which amused me the most was when the referees were warming up alongside the pitch and fans were shouting “COME ON REFS, LETS HAVE A BRILLIANT GAME, YOU CAN DO THIS” and clapping/cheering them on. Can you imagine that happening in front of the Stretford end with Mike Dean et al warming up! 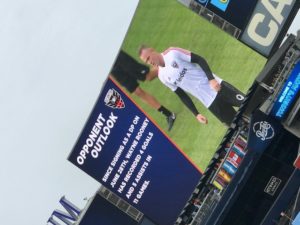 While Ronaldo tries his luck in Serie A, Rooney’s career has taken a different turn.

The stadium itself is impressive and the concourse is open so that you can still watch the game from there. I’d love to go see the Yankees play there. I can imagine that the place would be buzzing.  The seats are huge and cushioned with drink holders. There are so many food and drink outlets. The club shop was selling a nice signed print of Rooney & Scholes for $399.99. The appeal of United is massive no matter where you go.

For me, in terms of the quality you see in the Premier League it doesn’t compare. The football itself is slow and quite frankly boring. NYC dominated the game but couldn’t finish their chances and lived to regret it. Bit like watching United at the moment (!) You can tell that this isn’t the country’s No.1 sport.

It felt a bit sad watching Wayne Rooney play at that level when I have seen his whole Manchester United career. I was sat there tucking into my cheese and garlic fries, sipping on my expensive pint thinking about all the goals he scored and how magnificent he was. Reminiscing with people around me about his debut v Fenerbahçe when he scored a hat-trick…. none of them knew what I was talking about.

He is doing well in the MLS and has racked up 4 goals and around 6 assists in 12 games. You do wonder how he must feel going from playing in the greatest league in the world to the MLS. I am sure the money helps but I doubt very much that he will top the feeling of scoring a bicycle kick v City in the Premier League anywhere in the MLS! He attempted a bicycle kick in the 3rd minute from the middle of the penalty area… it went wide.

It wasn’t busy at all. No queues at the turnstiles, no queues at the bar. Empty seats galore! The crowd didn’t feel engaged to me. It was very much a social thing with people chatting and kids jumping around.

My two friends who have no real interest in football even said that this did not feel like a “real” football match. I’d agree with them. It felt like an exhibition game with nothing to exhibit! I am sure that had there been more of a crowd there would’ve been a Mexican wave. That’s what kind of atmosphere there was! There was a bit of drama when El Guaje David Villa scored a superb free-kick with three minutes to go to level the scores. A few boos rang out from the NYC crowd but nothing like it would be back at home.

I wouldn’t make a special attempt to go to any MLS games again. If I was in LA and Galaxy were playing I might try and catch the game, but I think I’ve seen all I needed to.

The best thing about attending an MLS game is without doubt it had to be the huge cans of ice cold Stella being sold by vendors in the stands. You may need a few of these to try and get into the spirit of things but at $15 a can it can turn into an expensive session! They sell wine, champagne, local beers, international beers and it’s the biggest selection of alcohol I’ve seen at a sporting event. I paid $68 for two pints and a carafe of wine.

I felt lucky when I was stood there watching that game. Lucky that I have seen quality football and watched my team win everything there is. Lucky that I have seen the world’s best footballers and been to some of the most magnificent stadiums in the world. Those last-minute goals, the goonage in the stands, the passion, anger and pure joy that goes with watching your team. Nothing tops a day out at the football with your pals and the MLS has a VERY VERY long way to go before it even starts to resemble what we have here. Then again, I may be biased as there is nothing on earth like being a red.

Manchester United Transfers: Time for the Board to Back Jose Mourinho?