The Serbian's shown his worth under Solskjaer.

A trip to Wembley is on the horizon if Manchester United can overcome Wolverhampton Wanderers in their own den. This season is the 110th anniversary of United’s very first FA Cup triumph, all the way back in 1908/09 — to win the 13th would be a good way to mark it.

This is only the second time that United have faced Wolves this season; there’s another trip to Molineux on April 2.

The previous match, back in September, finished 1-1 at Old Trafford, but United are in far different form now than they were then.

The statistics about how well Ole Gunnar Solskjaer has done in charge of the club get repeated every week, but they’re still not tiring.

United have played 18 and won 14 with the Norwegian in charge, only losing twice (and one of those defeats, to Paris Saint-Germain, didn’t matter in the end).

Wolves, meanwhile, have had a far different time of it since the middle of December when the managerial change was made at Old Trafford. Out of their 17 games in all competitions, they’ve won eight, drawn five, and lost four. They’ve only won two of their last five matches, and they were against Bristol City in the FA Cup and Cardiff at home in the league.

Since overcoming Liverpool in the third round, Wolves have had easy draws in the competition until now. They somehow contrived to draw against Shrewsbury in the fourth round but overcame them in the replay, and despatched of Bristol City, albeit only 1-0.

In fact, all of their victories in the FA Cup this season have been by a one goal margin: 2-1, 3-2, 1-0. It would be a surprise if this continued against United.

“This is a club that lives to win trophies, it’s a huge club,” Fred has said before the match. “There’s the FA Cup, we’re still in the Champions League too.

There’s another United midfielder who could be key to the way that this tie goes, and it isn’t the obvious one.

Nemanja Matic and Wolves’ Ruben Neves seem set for a challenging day against each other in the middle of the park at Molineux. Both are players who sit behind more attacking players, breaking up play and maintaining possession.

Their Football Whispers persona radars show a team or person’s playing style, and there’s significant overlap in the passing and defending sections for Matic and Neves. 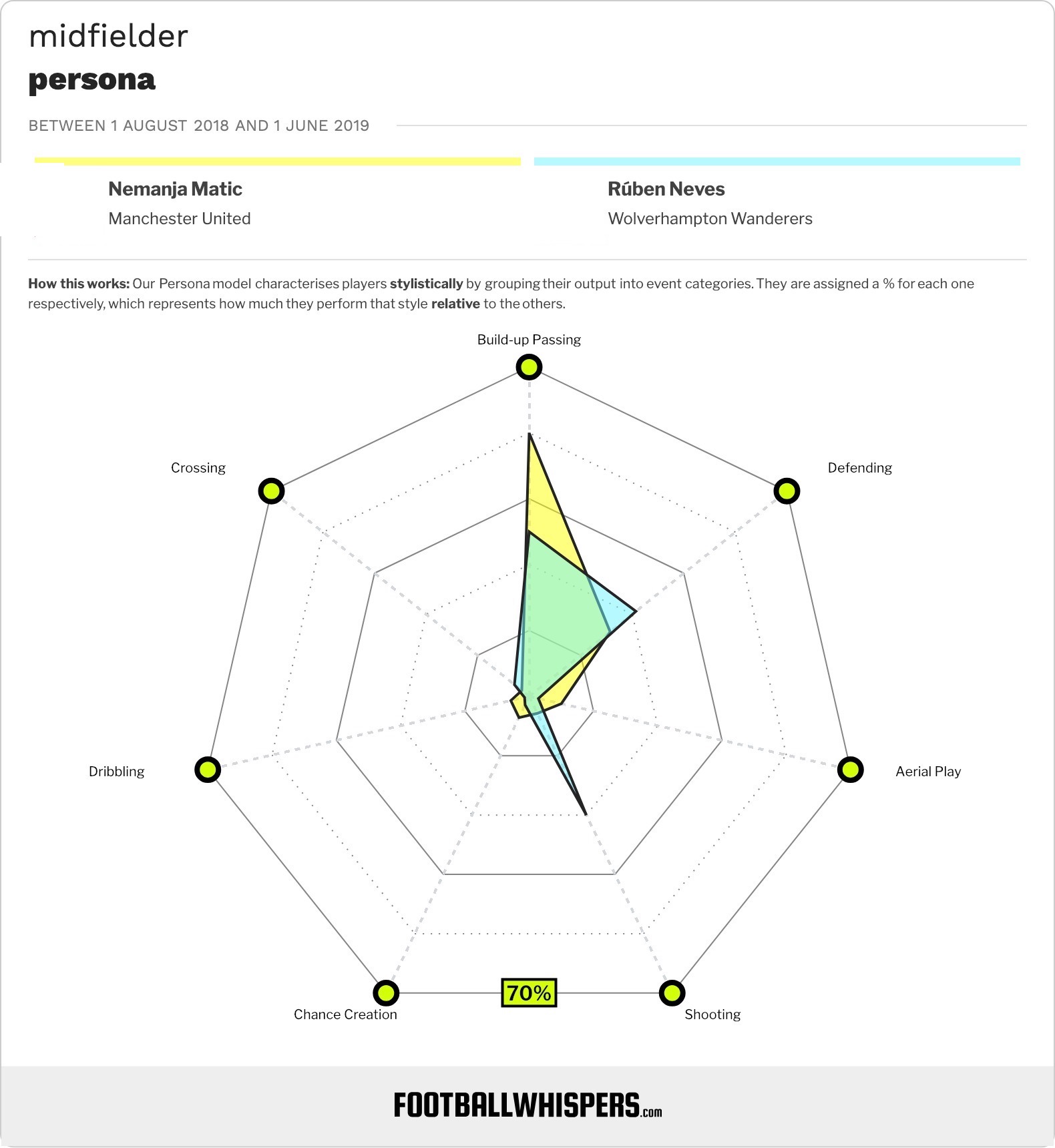 However, as their persona radars show, the big area where they diverge is their shooting. Neves averages 2.33 shots a game; Matic just 0.42.

This doesn’t mean that Matic is wasting opportunities to pepper the opponent goal. If anything, Neves is the one doing the wasting. In the Premier League, his shots average the second-lowest expected goals value per shot.

He’s taken 58 non-penalty shots and scored just one goal, and that’s about in line with expectation. The expected goals value of his open-play shots has been just 0.02, and the majority of them don’t even hit the target.

The pair will be fighting to control the midfield, doing the kind of grunt work that can often be overlooked while the more flashy players get the goals and catch the headlines.

Age is a principal difference between them too, eight years and many tens and hundreds of games in distance between them. Where one player may have more in his legs, the other may be more canny.

It says something about Matic’s impact on the team that he’s stayed in the side under both Jose Mourinho and Solskjaer, despite fans questioning the Serbian’s performances.

5 midfielders United could target this summer