Frenchman caught in tug-of-war between Mourinho and Woodward

If Jose Mourinho and Ed Woodward really do stand on either side of the divide at Manchester United then the future of Anthony Martial could be the deciding factor in which man wins the Old Trafford power struggle.

Mourinho may have dedicated United’s 2-0 victory over Burnley to his executive vice-chairman, in light of the “Ed Woodward: Specialist in Failure” banner flown over Turf Moor, but the duo’s vision of the club appears to be miles apart and at the centre of it stands Martial.

The Portuguese is – as he always has been – a win-now manager who has little care for two or even three-seasons time. Silverware is to be won in the here and now and he wants the players to achieve that in the best-possible way.

Woodward also demands success. But having backed Mourinho by sanctioning some considerable purchases – think Paul Pogba, Romelu Lukaku, Victor Lindelof and Fred – feels the belt has to be tightened at some stage and the resources available to the manager used.

One of those prime, untapped resources is Martial. Woodward’s most high-profile arrival before Mourinho was a surprise deadline day purchase in the summer of 2015. A largely unknown mercurial talent outside of France, he was United’s attempt at signing a superstar ahead of schedule.

Now the Frenchman is a pawn in this most political of games and it’s easy to forget there is a footballer at the centre of it all. Our friends at Football Whispers explain why discussions over a new long-term deal are justified.

Three years down the line we’re little closer to seeing the superstar who announced himself to the Premier League with a stunning debut goal in a North-West derby win over Liverpool. Instead Martial resembles a better and slightly more refined version of his teenage self but still talent yet to transform into full-fledged first-team regular.

That’s no good to Mourinho. He needs his footballers fleshed out, committed and consistent. So it’s no surprise the two have clashed over his performances and apparent poor attitude.

Mourinho’s preference was to sell the France forward this summer with his value still high ensuring reinforcements could be added elsewhere. He was, reportedly, a Tottenham transfer target at one stage.

But to Woodward, Martial represents more. He is part of the future of the club. Still just 22, we’re years away from his peak and United’s CEO wants to ensure that part of his career is in red.

With the former Monaco man remaining in Manchester as the August 31 deadline came and went, Woodward looked to have won the battle. But in a bold, pre-emptive strike he has upped the stakes by beginning contract negotiations.

Martial (somewhat remarkably) is a free agent next summer so it is a pressing matter and maybe the intention is still to sell as allowing a £36m signing to leave at a loss or, worse, for nothing, would be deeply embarrassing. 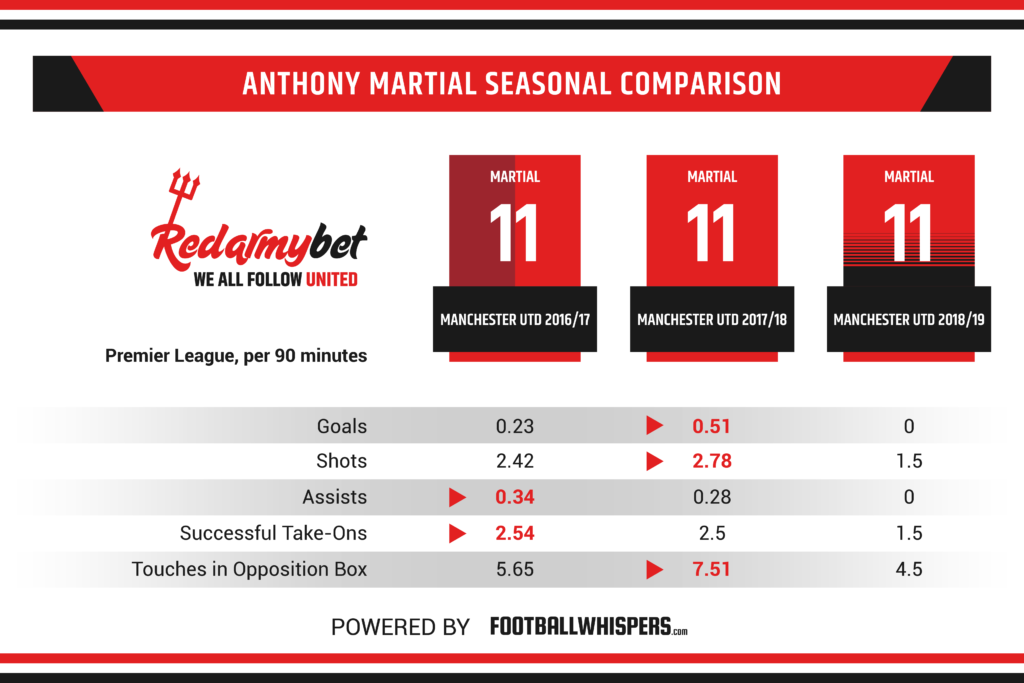 But the timing of it all, against the backdrop of the disagreements over transfers, the poor start to the season, the pressure on both individuals, makes Martial’s situation a clear distinction of ideas between Woodward and Mourinho.

However, a new long-term contract, which will place him in the upper echelon of earners if he’s not already there, has to be about more than just a political struggle. It has to be justified, not just in what it represents on the balance sheets but in the eyes of the fans.

His goal record has been modest – 36 in 137 matches in all competitions, one every 255 minutes in the Premier League and European cup competitions. They are far from elite numbers but the caveat is how few starts he’s had and how often he’s in and out of the side. It’s been hard to generate any real momentum.

Martial has also largely existed as a left-sided forward with Mourinho having little or no trust he can operate as a central striker. Consequently, he’s been more of a creative force than goalscoring one, with 15 Premier League assists across his three seasons. 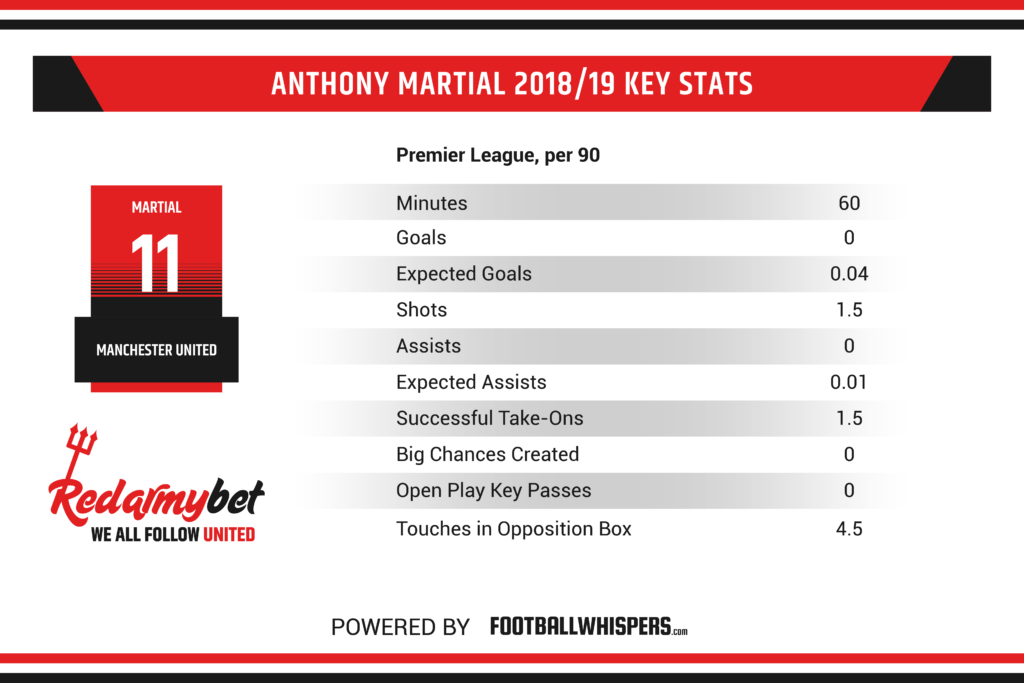 That’s a nice development and shows what a versatile and multi-dimensional forward he can be, if only we were permitted to see more of him more regularly.

Since making 29 league starts under Louis van Gaal in his debut campaign, he’s made 18 in the next two under Mourinho and only five since winning United’s Player of the Month award in January.

At his best he can be absolutely outstanding, a mixture of pace, power and technique few forwards possess; capable of taking defenders on 1v1, crafting clever passes or finishing first time. At his worst, he’s a disinterested nonentity.

However, the good should be reason enough for United to cling on to him because the right guidance, Martial is as much of an ideal of a modern-day striker as countryman Kylian Mbappe. He just needs the right guidance to get there.

Perhaps the responsibility lies with the individual and the person holding him back is, in reality, himself. But are three fragmented seasons enough to make that judgement of a talent who, given the circumstances, would have some justification to kick up more of a fuss than he has?

The modern arms race that is the world’s elite clubs and the players they own means allowing a prized asset to leave for a rival, without barely scratching the surface of his ability, is a risk too great for Woodward to take.

Mourinho has infamously been here before, discarding Lukaku, Mohamed Salah and Kevin De Bruyne while at Chelsea only to see all three return to the Premier League as world-beaters, signing the first for £75million last summer.

The potential for letting Martial leave only to develop in the way those three have would be another egg-on-face moment for Woodward – one he cannot afford on his watch.

United are on the back foot in the context of the Premier League title race and even further away regarding the Champions League. Martial represents a small beacon of hope of improvement. Tossing him away would be throwing away a small part of their future.