Mateo Kovacic has played just 20 minutes at the World Cup and started only 29 league games in the last two seasons. Yet he is one of the most desirable players on the market this summer.

The reason is quite simple: the Croatian is a special talent but has existed in the time of the Luka Modric-Toni Kroos axis at Real Madrid and Modric-Ivan Rakitic for the national side.

His switch to the Bernabeu in 2015 has seen his career stagnate and his declaration earlier this month that, “the best thing for me would be to go to another club where I’d have the opportunity to play regularly as a starter” came as no surprise.

Think Cristiano Ronaldo will rejoin this summer? Back it at 19/4 with RedArmyBet

And although he may be a victim of circumstance at club and international level, at 24, his is an ability that deserves more than being sat on the bench with fleeting appearances.

According to reports, Manchester City, Juventus and former club Internazionale are keen on the Croat who, barring a late intervention from incoming Madrid coach Julen Lopetegui, will have new employers by the end of August.

Now, though, Kovacic is Manchester United transfer target. Well-known to Jose Mourinho having appeared against his Madrid as a 17-year-old for Dinamo Zagreb in the Champions League in 2011, it isn’t clear how he’d fit in at United given his skillset and the demands the Portuguese places on his midfielders.

Our friends at Football Whispers explore what the Real Madrid outcast might bring to Old Trafford and whether United even need the Croatian.

For starters, Kovacic doesn’t necessarily have a best position; at least it’s not been properly identified where he’s best suited.

For Madrid he’s tended to be used on the left side of a three-man midfield. Although naturally right-footed, he is technically strong enough to use both. While he’s had his moments in the famous white shirt, his performances have never been enough to dislodge Modric or Kroos.

Kovacic’s biggest problem is he’s not quite as either, nor does he possess the defensive abilities of Casemiro. Therefore, he’s always had to be the fourth fiddle in Zinedine Zidane’s midfield orchestra.

That shouldn’t under-sell him as a footballer as he’s been in direct competition with two generation-defining players and as pure and destructive a defensive midfielder as there’s been since the emergence of Sergio Busquets.

Despite his stints in and out of the side, in ten starts and 11 La Liga substitute appearances, Kovacic still averaged 67.5 passes per 90 (third-highest in La Liga for midfielders) at 93.6 per cent accuracy, 0.81 open play key passes (17th in the Spanish top-flight) and led the rankings for successful take-ons with 3.18. 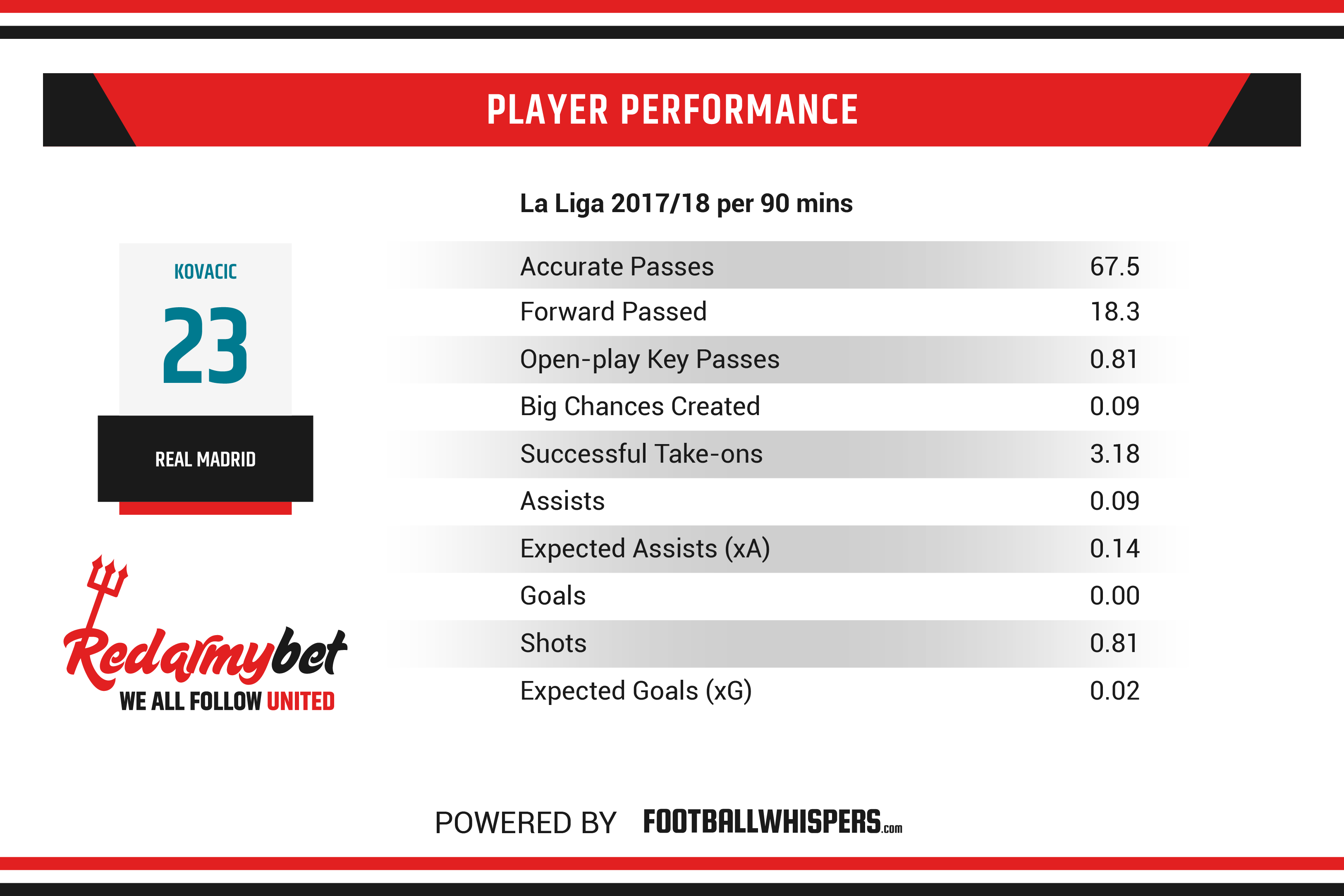 If those numbers were replicated in a team and set-up which valued him enough to make him a regular starter, the results could be impressive. The issue is, which club suits him in the best?

Taking United as a possible destination makes some sense given Mourinho seems set on changing the composition of his midfield this summer. Michael Carrick has retired, one-time Arsenal transfer target Marouane Fellaini looks to be leaving and Fred has arrived from Shakhtar Donetsk as a box-to-box presence.

What United lack is a passer in the Carrick mould and Kovacic, theoretically, could operate as a deep-lying playmaker alongside the steadying presence of Nemanja Matic.

The issue with that is the accompanying style of play would require a team to dominate possession. If you have a player stationed at the base of midfield you’re entrusting them with dictating the tempo. But you need the ball to do so.

Last season United ranked sixth for possession with an average of 53.9 per cent, sixth for pass completion with 83.6 and sixth again for average passes on 528; among the upper echelons of the Premier League but, relatively speaking, within the scope of the division’s elite, they are not a pass-heavy team.

United are more reactive and transitional, relying on quick interchanges between defence, midfield and attack. There is purpose but not a great deal of patience.

Mourinho could, given the sizeable gap he must bridge between his team and Manchester City, change his approach. But history tells us the Portuguese is not for turning and changes on the field are likely to be in individuals not ideas.

If United won’t get the most of out of Kovacic’s passing game, however, his ability as a dribbler will surely fit a team who try to play with a degree of velocity. Kovacic is at his best winning possession, accelerating into space and then delivering a killer pass. 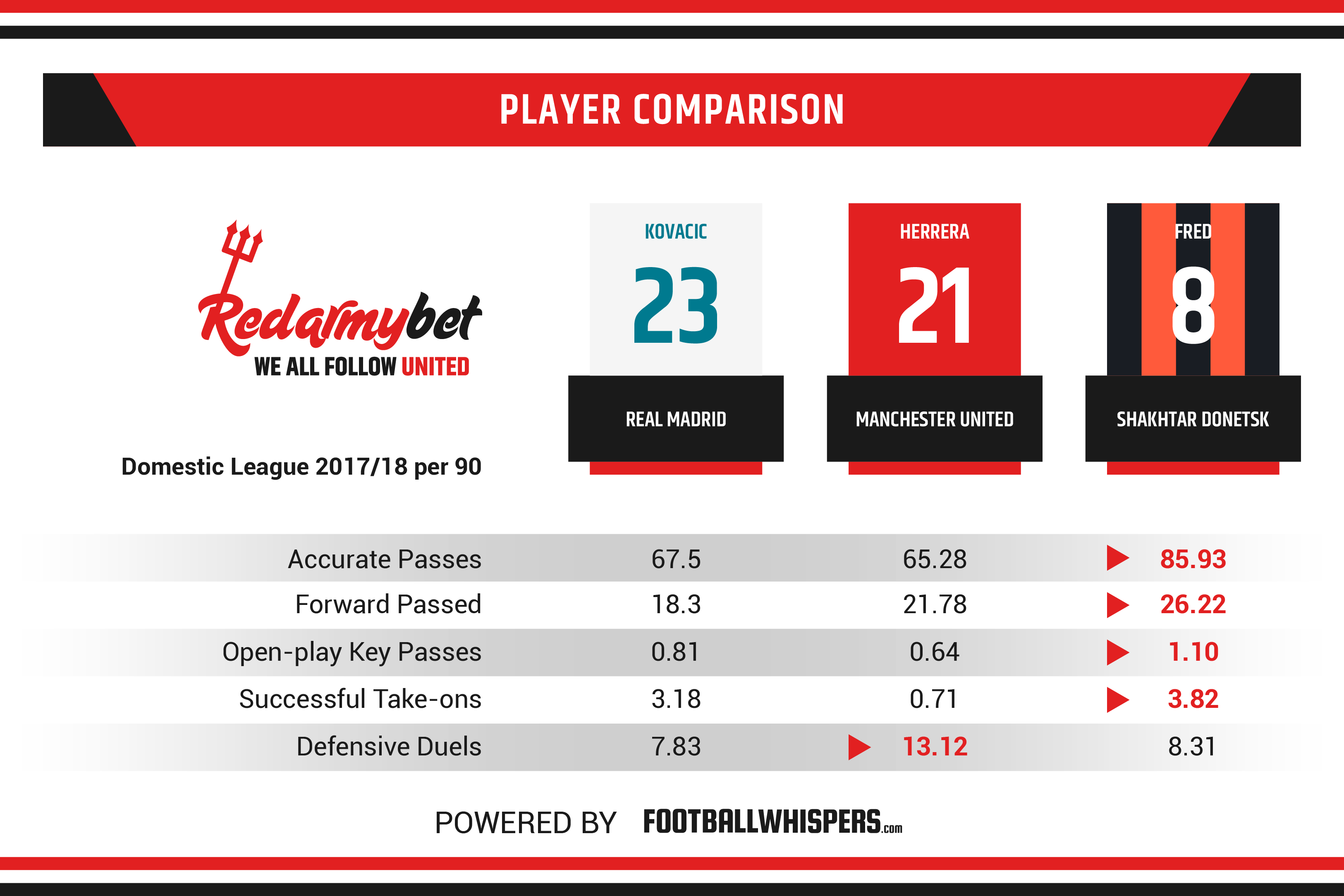 But that is eerily similar to what Pogba has been doing – albeit with a slightly more attacking slant – and what Fred is also capable of, given the right opportunity.

Which increasingly points to the conclusion that choosing Old Trafford would lead Kovacic from one situation where is competing with two midfielders better suited to a team’s style than him, to another.

Perhaps Mourinho sees him as an upgrade on Ander Herrera whose defensive game dwindled in 2017/18 while any attacking edge he had during his Athletic Bilbao days hasn’t transferred to England.

Kovacic is a good defensive player; his 3.37 tackles per 90 was 12th-highest among La Liga midfielders and he is particularly good at hunting down opposition players if they spend too long on the ball. He is positionally disciplined, tracks runners and is strong in a physical sense.

But a modern midfield is about a blend and with Fred’s arrival and the apparent desire to give Pogba more a platform to attack, it’s difficult to see, outside of his tackling, where Kovacic would fit in.

In Mourinho’s favoured 4-2-3-1, Matic and Fred look the most likely candidates as midfield pivots with Pogba in front. In a 4-3-3 that trio also have a nice mix of skills to complement each other and be United’s first-choice unit.

Kovacic is an exceptional midfielder who would be a bona fide star for the right team, given the independence to create or operate as the sole playmaker in a slightly more withdrawn role. The issue at United, however, is neither of those vacancies appear available.