Jordan takes a look at the career of John O'Shea, that began 19-years ago on this day.

Paul Pogba, Ryan Giggs and Marcus Rashford are just some names that spring to mind when you think about some of the best players to come through the Reds’ academy.

A name that doesn’t often come to mind as a big name is John O’Shea, despite coming through the academy and making almost 400 appearances during his 13-year stay.

However, he has become a popular figure with the fans since making his debut for the Reds on this day in 1999.

He then turned himself into a first team regular and provided versatility as he could play across the defence and even in midfield.

Following Rio Ferdinand’s suspension in 2003, the Republic of Ireland international stepped up in the centre of defence, making 33 league appearances and helping the Reds claim their 11th FA Cup trophy. 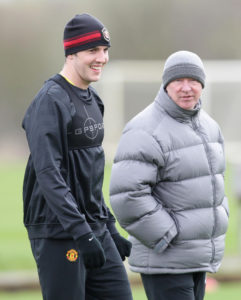 One of his most memorable moments came at Highbury, when he found himself up front and spectacularly lobbed Manuel Almunia from 20 yards, putting the Reds 4-2 up.

O’Shea was often used as a rotational defender in the years that followed, but quickly became a fan favourite in 2007.

In a match against Spurs, O’Shea was put in goal as Edwin van der Sar was taken off after breaking his nose.

During the game, he denied fellow Republic of Ireland teammate Robbie Keane a late consolation goal.

A month later, he scored an injury time winner against Liverpool at Anfield, a goal which would prove important and helped the Reds reclaim the Premier League title.

Throughout the 2008/09 season, O’Shea became a regular starter again due to injuries to defenders Gary Neville and Wes Brown. 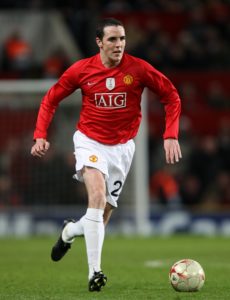 Towards the end of the season, the defender scored the only goal of the game in the Champions League semi-final first leg against Arsenal, setting up the Reds to reach the final.

He started the final and played the full 90 minutes and was arguably one of the better players on the pitch as the Reds fell 2-0 to Spanish giants Barcelona.

O’Shea captained the Reds for the first time in the league in the opening game of the 2009/10 season against Birmingham City, and went on to celebrate his 350th appearance by scoring in a 2-0 victory over Stoke.

He was then used rotationally again before his contract ended 2011, eventually joining fellow Premier League side Sunderland.

Despite not seemingly being a big name, O’Shea is certainly a fan favourite and has the honours on his name to show for it.

Coming through the academy, making almost 400 appearances and claiming five league medals, an FA Cup, two League Cups and a Champions League is an incredible feat for any player.

He may not be a big name due to not being a regular starter over the years, but O’Shea left a mark on the fans and certainly provided us with some memories along the way.