We take a look at Rooney's career at Old Trafford.

Back in 2004, transfers of £30 million and above were rare and only really seen on players with world class status.

At the time, the transfer record was £46 million on Zinedine Zidane who was widely considered as being the best player in the world. However, on transfer deadline day in August 2004, the Reds splashed £30 million on an 18-year-old Wayne Rooney from Everton.

Sir Alex Ferguson admitted that he had some convincing to do for the transfer to be sanctioned, he said:

“We made overtures to Everton, they of course resisted but we kept at it. At the end of the day it came down to a price.”

Nevertheless, Rooney signed and subsequently made his debut 14 years ago. 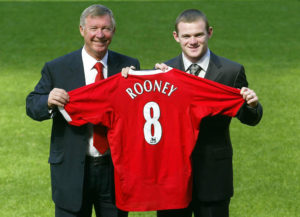 Rooney with Sir Alex on the day he signed for United.

It was a debut that Rooney will never forget, and it will forever be etched in history and the minds of United fans as one of the great debut performances.

The Reds completed a 6-2 victory over Turkish side Fenerbache in the group stages of the Champions League, with three of these goals being scored by Rooney.

This made him the youngest ever scorer of a hat-trick in Champions League history. What followed was a Reds career that spanned over almost 400 league appearances and almost 200 league goals. 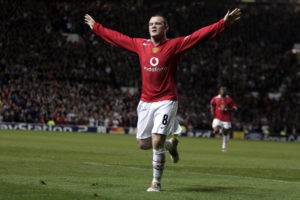 Widely regarded as one of the best English youngsters at the beginning of his career, with thanks to his famous winner for Everton against Arsenal, many English clubs were after his signature come the 2004 summer transfer window.

He handed in a transfer request and the Reds put in an offer both the Toffees and Rooney couldn’t refuse.

In his first season at Old Trafford, Rooney lived up to expectation and became the Reds’ top league scorer and claimed the PFA Young Player of the Year Award. His first trophy came in the League Cup final in 2006 as he scored a brace in a 4-0 victory over Wigan.

Despite his early successes, Rooney found himself being sent off on few occasions which gave him a reputation of being hot-headed.

In the 2006 World Cup, Rooney was sent off in the quarter-final match against Portugal for a stamp. This has since become infamously known due to Ronaldo, a Reds teammate at the time, being caught winking after seemingly influencing the referee into making a decision.

Rooney was also sent off in a Champions League match in the 2005/06 season for sarcastically clapping the referee who had just booked him and was also sent off for elbowing Porto defender Pepe in a 2006/07 pre-season tournament.

In the sixth sending off of his career, the United captain missed a month of football, including a derby clash at the Etihad Stadium, after a challenge on Stewart Downing back in 2014.

Fortunately, Rooney matured as he grew up and such occurrences happened less often.

Success followed for Rooney in almost all formats, which included three consecutive Premier League titles from 2006 to 2009 and a Champions League in 2008.

The 2009/10 season was arguable Rooney’s best in a United shirt, as he scored 26 league goals in just 32 games, finishing as the league’s top scorer.

Rooney was awarded PFA Player’s Player of the Year, however the Reds couldn’t retain their league title for the fourth consecutive year. Rooney’s goalscoring record in the 2011/12 season was also impressive as he scored 27 goals, his most in a league season.

As Rooney aged, he became a less proficient goal scorer, eventually playing predominantly in midfield towards the end of his United career.

However, in 2017, Rooney surpassed Sir Bobby Charlton to become United’s outright leading goal scorer, before he left the following summer to return to Everton.

The legacy that Rooney has left is secure. Any player with a single-club career lasting over a decade, becoming their all-time top scorer in the process, is one that will be difficult to replicate.