United legend Brian McClair gives his views on the Reds' manager, players and whether they can beat the Blues.

Manchester United legend Brian McClair has been speaking to RedArmyBet ahead of the clash against derby rivals Manchester City this weekend.

The former Reds’ striker and academy coach shared his views on Jose Mourinho’s season so-far, on whether Romelu Lukaku needs to move on and if United have any chance this Sunday in the Manchester derby clash at the Etihad.

“It’s been a difficult time for him [Jose Mourinho] and it’s fairly clear he didn’t get the recruits or at least one of the recruits that he wanted at the beginning of the season. You can see with the choices he’s trying to select that he’s still not quite comfortable with the defence.”

“Choccy’s” also been spending some time with Eric Cantona and Clayton Blackmore – you can guess which one bore the brunt of his jokes – and told us what it was like to see his old team mates again, especially Eric! 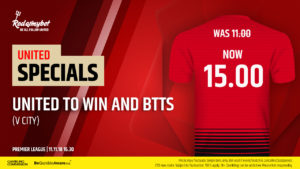 “He hasn’t been in any kind of form really, he’s missed a number of games through injury. Going back a year when people said which player would you take from another club, I would have said him [Alexis Sanchez]. So I was quite thrilled when he opted to come to Old Trafford at the beginning of the year but for whatever reason things haven’t worked out at all for him.”

“Looking back on my career, I’m happy to have been what Eric would call a ‘water carrier’ that’s how he described Deschamps.”

Are United starting to lose faith in Jose?