Pellegrini Could Be The Bargain Signing To Fix United’s Midfield

United are reportedly preparing a summer move for the Roma youngster

After their worst start to a league season in 28 years, it’s no surprise to learn Manchester United are eyeing a few key squad improvements.

While reports suggest Jose Mourinho may finally be furnished with a new central defender during the January transfer window, after pining for an upgrade in the position all summer, according to The Mirror, United will keep their powder dry until next summer to move for their primary midfield target.

Impressive 22-year-old Roma midfielder Lorenzo Pellegrini is the man identified to bolster the Red Devils’ middle third and, it is claimed, the Italian has an eminently affordable £26.5million release clause in his contract that will become active at the end of the season.

Our friends at Football Whispers are on hand to run the rule over Pellegrini to see whether he is the midfield addition United crave.

Who is Lorenzo Pellegrini?

A product of Roma’s academy, Pellegrini made just one Serie A appearance for his boyhood club before being sold to Sassuolo in 2015.

Competing for minutes with the likes of Radja Nainggolan, Miralem Pjanic and Daniele De Rossi was, at the time, a battle the youngster was never going to win at the Stadio Olimpico. However, in recognition of Pellegrini’s nascent talents and huge future potential, the Giallorossi insisted the €1.25million deal which took him to Sassuolo included a €10million buyback option. 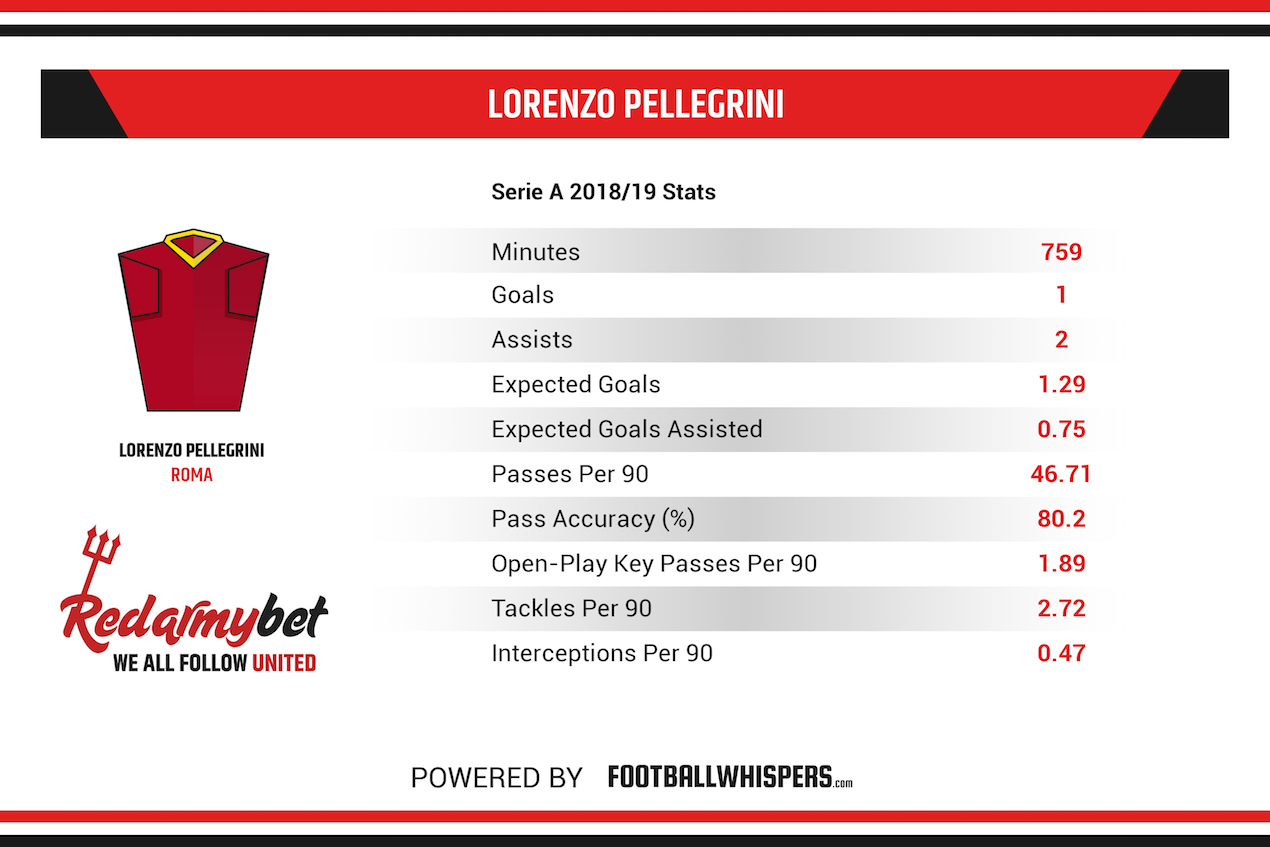 United are priced at 5.00 with RedArmyBet to finish in the Premier League’s top four this season*

Pellegrini shone with the Neroverdi, his development crystallising in a breakout campaign in the 2016/17 season, his second with the club, in which he played 34 times and scored eight goals.

When Roma replaced outgoing manager Luciano Spalletti with Sassuolo boss Eusebio Di Francesco in the summer of 2017, they also triggered Pellegrini’s buyback clause, surely impressed by the youngster’s superlative displays with Italy at the European Under-21 Championship.

Pellegrini made 22 Serie A starts in his first season back at Roma, scoring three goals and assisting a further four. This term has seen him cement his place as a regular in midfield, starting 12 of Roma’s 17 all-competitions games to date.

What are his strengths?

At his best in a box-to-box role within a three-man midfield, Pellegrini is confident and controlled in possession, able to pass well over all distances with either foot and possesses the engine to relentlessly cover ground between penalty areas.

A thunderous ball-striker, he is a goal threat from anywhere within 25 yards and, with an average of 2.96 total key passes per 90 minutes, he has the creativity to unlock opposition defences.

Pellegrini is also a robust presence, standing an imposing 6ft 2ins, capable of winning back possession and unafraid of a physical challenge. While he is not the kind of game-reader who sits deep and breaks up play through timely interceptions – he averages just 0.47 interceptions per 90 this term – he is a committed ball-winner, making 2.72 tackles per 90, an average which ranks him in 20th among Serie A midfielders.

How would he fit in at United? 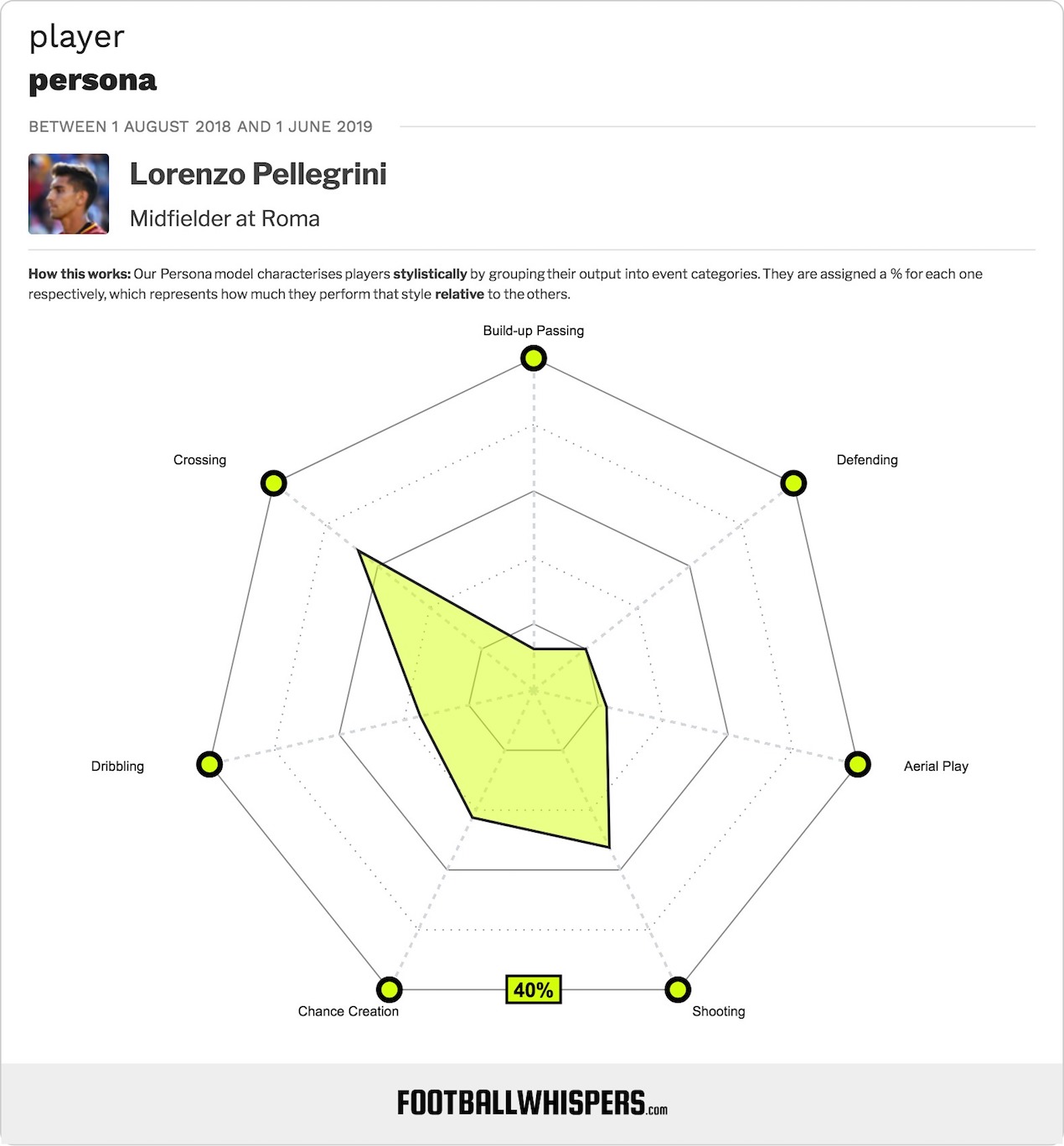 United are 34.00 with RedArmyBet to win the Champions League this season*

Many United fans are calling for the club to seek an upgrade on the underperforming Nemanja Matic. However, this kind of deep-lying pivot role is not one that would particularly suit Pellegrini’s gifts.

Instead, it is more likely the Italian is being eyed as an alternative to the likes of Marouane Fellaini, Ander Herrera and £52million summer signing Fred on the right side of a midfield three, with Pogba retaining his position on the left.

In theory, Pellegrini and Pogba could work well in tandem, with the former’s industry and energy complimenting the latter’s supreme creativity and invention. And, at just £26.5million, Pellegrini has the makings of a genuine bargain.