His haircut, his boots, his price tag, the number of Instagram followers he has, his performances for his national side and how he helped them to ultimate glory. You could almost swap the names Cristiano Ronaldo for Paul Pogba when it comes to their media coverage.

For once in recent years Paul Labile has been left in the media shade as all the talk ahead of United’s clash with Juventus centres around Ron’s return. It’s hardly surprising given that CR7 as he’s now known, won three Premier League titles, an FA Cup, two League Cups, the Champions League and World Club Cup during his Old Trafford career – not to mention the Ballon D’or, Premier League golden boot and the PFA Player of the Year Award- twice. 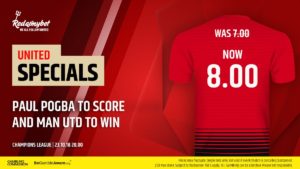 If Ronaldo hadn’t joined Juventus then tonight’s game would surely be about Pogba facing his old club, the media columns would be full of quotes from former team mates waxing lyrical about how important a player he was during his time at Turin and United fans would be gloating about how they’ve now got the Old Lady’s prized asset. But this isn’t the Pogba show, it’s the Ronaldo one and that may be a good thing for both him and Manchester United.

Over the past few weeks we’ve seen United’s most expensive signing embroiled in stories of a rift with his manager, rumours of him leaving for Barcelona, not to mention being given and stripped of the captaincy. And it’s not even November.

While certain commentators will always be obsessed with every aspect of Pogba’s life, having at least one game where all eyes aren’t on him may just give the former Juve man the chance to remind everyone why he’s so talked about – because he’s a genuinely gifted footballer.

Pogba has shone at times this season and frustrated at others, with his performances against Brighton and Hove Albion and West Ham amongst his worst ever, while Young Boys and the second halves against Newcastle and Chelsea reminded us all just why United paid so much for him.

If Pogba wants to truly start ending the discussion as to whether he’s truly progressed since swapping the climes of Turin for those of Manchester then stepping out of Ronaldo’s shadow and helping United move closer to the Champions League knockout stages, could be the perfect time.

What would a younger Ibrahimovic have been like at United?