Ivan Perisic was one of the outstanding players in the World Cup final despite his brave Croatia side going down 4-2 to heavy favourites France.

The winger scored a superb first-half equaliser for the underdogs before France ruthlessly punished them to win the World Cup for the second time.

Perisic ended the tournament with his reputation thoroughly enhanced and, somewhat unsurprisingly, he has been subject of Manchester United transfer rumours once more.

Jose Mourinho was heavily linked with a move for Perisic 12 months ago, before he signed a new deal to remain with Inter Milan.

But Mourinho looks to be back in for the attacker once again ahead of the new season with his stock having never been higher on the world stage. Our friends at Football Whispers take a look at Perisic and what he can offer United.

Why do Manchester United want Perisic?

United want to reclaim the title from noisy neighbours Manchester City and have to bridge a huge 19-point gap between themselves and Pep Guardiola’s side this season if Mourinho’s Old Trafford reign is to avoid further scrutiny.

Can United win the title next season? They’re priced at 13/2 with RedArmyBet

To do this, the Portuguese needs to inject more creativity into his side which, at times, looked ponderous in the last campaign. There is no doubt Perisic fits the bill in terms of bringing quality into the final third.

The Croatian attacker scored three goals during his country’s World Cup campaign including their equaliser during their 2-1 semi-final win over England where he played a major role in turning the tie around in the second half.

His creativity would be a huge asset at Old Trafford with the midfielder boasting an xA 90 score of 0.29 which is fifth best in his position. He fell just short, posting 0.24 assists per 90 for a total of nine.

Perisic’s willingness to break into the box is a key attribute with the attacker managing 6.54 touches in the opposition box per 90 which ranked him ninth for attackers in Serie A last term. He only managed 0.86 take-ons on average but his game is more about the final decisive action in the final third than beating men.

Manchester United struggled to break teams down at times last season, particularly at home against defensive-minded opponents, and the potential arrival of Perisic would inject some much-needed unpredictability into the side. 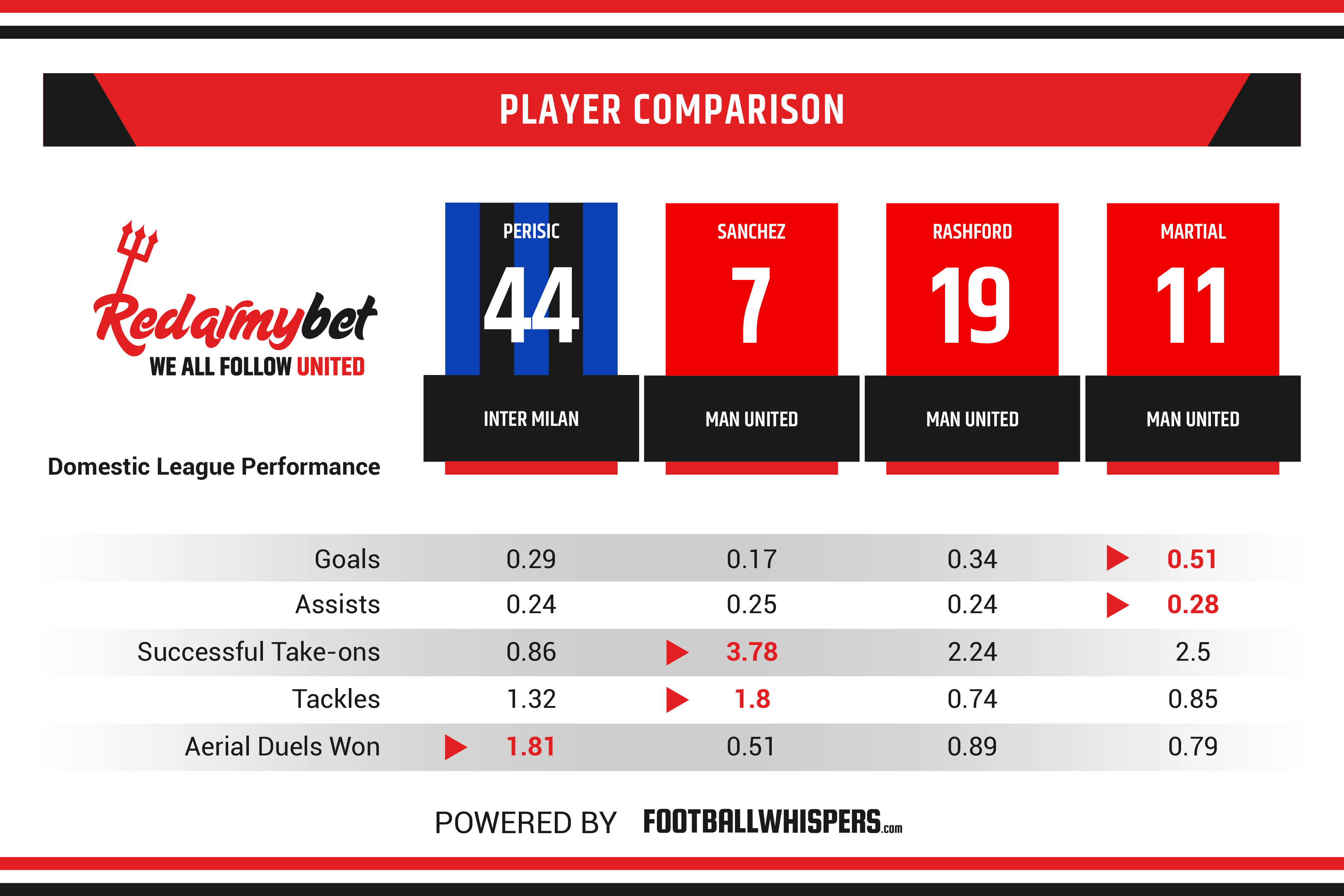 He would also prove a popular signing with his relentless endeavour, alongside his undoubted talent, bound to endear him to Mourinho.

He managed 1.32 tackles per 90 last season – only Alexis Sanchez of United’s current widemen won more (1.8) – while his 1.81 aerial duels eclipsed the Chilean, Marcus Rashford and Anthony Martial by a distance.

Why Perisic would be preferable to Willian

Willian has also been a Manchester United transfer target this summer but there will not be room for both at the club – especially with United arguably already overloaded on the flanks.

The Chelsea attacker has been linked with a move away from Stamford Bridge and Mourinho is believed to be keen on a reunion. But the exit of Blues coach Antonio Conte could clear the way for the Brazilian to stay in London.

Willian may be familiar with the Premier League but Perisic has the edge when it comes to his expected goal contribution (xA + xG) which is 0.55 per game as opposed to 0.48 from the Chelsea winger.

Perisic will also offer a greater physical threat than Willian with the Croatian winning 1.81 aerial challenges per 90 – compared to just 0.47 from the Brazilian.

If Mourinho wants to play direct, as he has done on plenty of occasions by utilising players such as Marouane Fellaini, then Perisic is a better option than Willian. 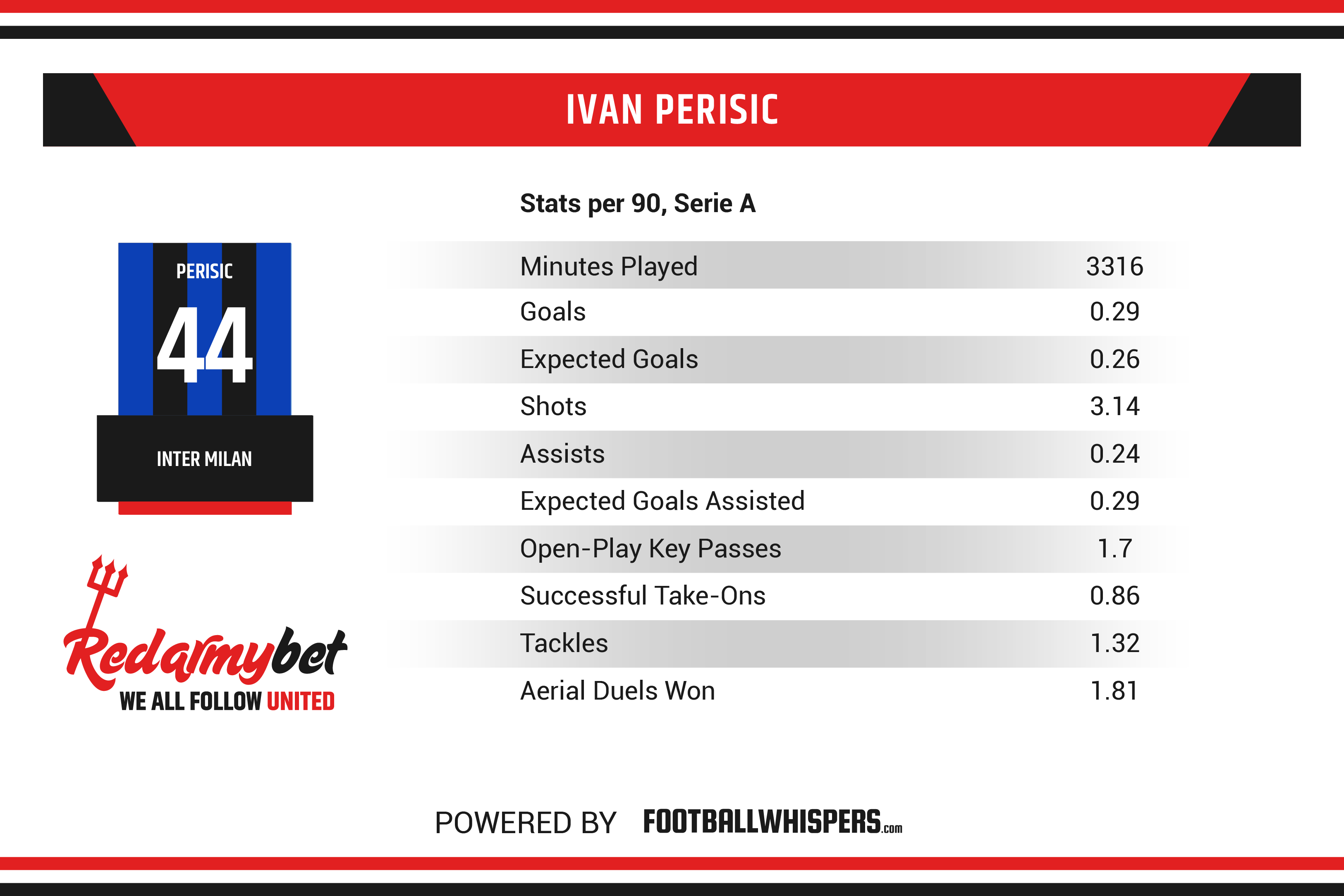 Where will he fit in at Old Trafford?

There are no shortage of attacking players at Manchester United, particularly on the left-hand side, but Perisic is talented enough to hold down a place if he moves to Old Trafford.

It is clear Mourinho does not trust Martial to deliver on the big stage and the Frenchman, who has been subject of Tottenham transfer rumours, appears destined to move on. For all his natural talent, a frustrating lack of end product has been his downfall and he simply does not fit into Mourinho’s plans.

Sanchez has been a disappointment since his move from Arsenal in January and it is clear Mourinho has yet to nail down the Chilean attacker’s best position. But, given United’s considerable financial investment in the forward, he will persist with Sanchez for a while yet.

Perisic is a genuinely two-footed player with his versatility a significant asset which could see him slot into a number of positions across the attack.

His work ethic also stands out for an elite player with his tireless running something which will appeal greatly to Mourinho and fit his vision of a successful team.

Whether this means he starts on the left or is switched to the other side, Perisic is coming into his prime and would be add the much-needed punch United require as they bid to challenge next season for domestic and European silverware.

How United can bridge the gap to the top four