RedArmyBet brings you the Darts Premier League preview for week 15 in Sheffield with the latest betting tips and enhanced odds.

Things are going from bad to worse for Michael Smith as he followed his 8-1 defeat to Rob Cross last week with an opening round loss at the Austrian Darts Open on the weekend. It means he’s won just three of 14 matches this season, while he has a terrible 3-16 record against James Wade. The Machine continued his fine year with an 8-4 victory over Gerwyn Price last week and is now in the driving seat for one of the final two play-off spots. Given his head-to-head record with Smith, where he’s actually won the last nine, Wade looks a generous price at odds-against.

Both these men won last week to increase their play-off hopes but Rob Cross did so while averaging 102.54, while Mensur Suljovic only averaged 93.91 as he came up against an out of form Peter Wright. This is an overall reflection of their form so far this year where the Englishman averages 99.58 and Suljovic 95.93. Although the Austrian won 7-5 the last time they met in the Premier League, Cross was 5-1 up only to collapse with Suljovic winning with just an 88.71 average. Over the best of 14 legs, we expect Voltage’s class to tell.

This is a huge encounter in terms of play-off aspirations. Daryl Gurney and Gerwyn Price are 5thand 6thand on 16 and 15 points respectively, just behind the two players in 3rdand 4thon 17 points. Gurney impressively beat MVG last week and while he may have won more matches than his opponents, he’s been hit-and-mis as he’s also lost more. Price has tasted defeat just four times and like their averages this year, has shown great consistency – averaging 98.31 compared to the Superchin’s 95.49. What’s more, the Welshman leads their head-to-head 8-2 (with one draw) and in a tight encounter we’d rather keep the more solid play onside. 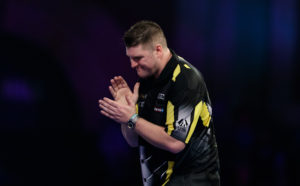 This year continues to be a struggle for Peter Wright so the last player he needs to face in Michael van Gerwen. The Green Machine suffered a rare defeat last week, but it was nothing more than a blip as he recovered to win a 4th European Tour event already this season with a tournament average of 99 in Austria. Snakebite averaged only 89 in defeat last week and the last time these two met in the Premier League, MVG trounce the Scot 7-1, averaging 100 to Wright’s 87.