We take a look at five things we learned from last night's historic win over PSG.

A contract. A statue. The freedom of Manchester. Ole Gunnar Solskjaer deserves it all.

It says something about the belief the manager has instilled in not just his team but the entire club, that many fans before kick-off were suggesting United could go through last night. Yes, United had 47 players out through injury. Yes the average age of the eleven who finished the game was just 14 years-old.

But this is Ole. He can win games against European giants after being 2-0 down using a team assembled from the spare parts of the academy. He can do anything, he’s more than a manager. He’s our saviour. Halle-effing-llujah, let me worship at Ole’s altar.

So just how did United overcome being two nil and nine players down from the first leg? How did a team, so reliant on the midfield axis of Nemanja Matic, Ander Herrera and Paul Pogba manage to cope without any of their midfield regulars?

Why did a player who looked completely bereft of confidence, just a few weeks ago, suddenly look like a better version of Ruud van Nistelrooy? Ole. That’s why. The Norwegian genius has gone from legendary player to adored manager in the space of a few months.

Ole won’t need to get the ferry home from France, he can walk across the channel – and no I don’t care how OTT I sound in my adulation of him.

So what did Wednesday’s emphatic win over the French side show us other than I’m not allowed to change my kids’ names to Ole Gunnar, despite my protestations. 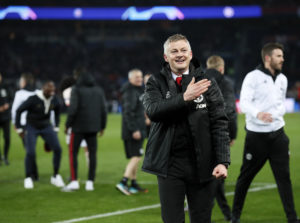 Ole can be mean when he has to be.

When Romelu Lukaku gave United the lead after just two minutes, it looked as though all that belief and positivity was well founded, that was until Eric Bailly did his best to hand PSG an equaliser. And succeeded.

Even Paris’s rallying couldn’t stop the Ole juggernaut and the manager showed he can do the nasty as well as the nice by replacing the hapless Bailly with Diogo Dalot.

Bailly may have limped off but the decision had been made long before he picked up any ‘knock’ and seeing the manager can be ruthless is a welcome reminder that Norwegians survive the winter months for a reason – they’re hard as nails, even the ones who smile at you all the time.

Other teams should be afraid and remember this isn’t all about hugs and kisses, the manager can channels his inner Fergie too. Bailly had to come off before it was too late and the manager wasn’t about to wait till half time to save the defender’s blushes by costing the Reds the game.

Chris and Victor. End of.

There’s no debate, there’s no argument or counterpoint. It’s a done deal. Chris Smalling and Victor Lindelof are United’s centre back pairing not just for this season but the next few too.

Stick your expensive summer targets, Smalling has shown it’s not just strikers who benefit from the new regime, the former Fulham man was excellent in the City of Lights and it’s time we realised it was form not ability that was letting him down.

With the right manager and centre back partner, Smalling is the player we all thought he was going to be when he arrived from West London all those years ago. 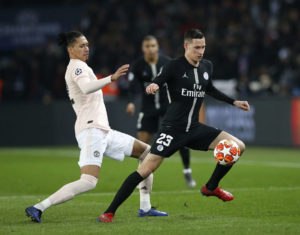 We’ve all slagged off VAR – imagine if it was around in ’99 we’d have lost momentum waiting to see if Teddy Sheringham’s goal was onside and Ole’s wouldn’t have happened was my own particular argument.

However, I was wrong as the referee decision to award a penalty for Kimpembe’s ‘handball’ was the best refereeing decision since Mark Clattenburg decided to retire.

United to reach the Champions League final at 4.50*

If you don’t love Marcus you must be a Blue.

Getting a penalty is one thing, scoring it is another – just ask Pogba – but Rashford refused to be denied when the pressure was on.

As the PSG players did their best to put him off and Gianluigi Buffon gave him the death stare, Rashford simply stood stoically waiting for his moment with destiny – then buried his penalty in a manner befitting a German.

It was emphatic it was joyous, it was the unlikeliest of winners and sendt United through to the last eight of Europe’s elite.

City vs. United in the Champions League final at 12.00*

No one can coach strikers better than the manager of Manchester United.

One thing that’s always puzzled me about England managers – bar perhaps Glenn Hoddle – is how do they ‘coach’ players like Marcus Rashford. How can a manager like Gareth Southgate who was a half decent defender but hardly a world class striker, teach a player like Rashford anything?

Especially in the space of two days every few months? The answer is they can’t but Solskjaer can, as not only does he spend almost every day with his players he’s also one of the best finishers ever to play the game.

Ole has worked with Lukaku, not just on different parts of his game, but also in building his confidence.

It shows as Lukaku looks more and more like the player who was at Everton rather than the player who played like he belonged back there. The Belgian took his first goal in particular very well and was alert enough to pounce on the unlikeliest of mistakes for his second. Rashford’s late penalty may have sealed the win, but it was Lukaku’s goals which made it possible.

How the World Cup passed Rooney by