It was, for most players in a Manchester United shirt, another disappointing evening. Frustration was etched on the faces of Paul Pogba, Romelu Lukaku and Alexis Sanchez, all of whom might have been expected to put on a performance against Valencia.

But they didn’t, and again there was an air of disillusionment around Old Trafford. This is a group of players who seem to be without self-belief, without confidence. That they struggled to create chances against a Valencia side who have hardly excelled in La Liga this season, was indicative of their struggles.

If there were positives, though, they came in the shape of Manchester United’s younger players and our friends at Football Whispers pick out two who caught the eye.

While the more experienced, more established players toiled without any real direction, Luke Shaw and Marcus Rashford played with purpose, clearly determined to prove a point to Jose Mourinho.

It was that left-hand side that appeared the most likely avenue of success. Shaw, who has fought back from the nadir of his playing career to earn his place at fullback on merit, was assertive defensively and looked to drive forward when on the ball.

Back Pogba to score and United to beat Newcastle on Saturday at 3.75 with RedArmyBet*

The 23-year-old linked up well with Rashford on occasion and played a number of incisive balls down the left flank. He was assured on the ball, completing 92 per cent of his passes (two of which were key passes) – a total bettered only be Eric Bailly – and dealt well with Valencia’s attacking threats.

Shaw’s resurgence is impressive. He has performed consistently throughout this season and Tuesday night was no different. It is clear that he is determined not to lose his place again, not to give Mourinho any excuse to remove him from the team again.

There was, as there has been regularly this season, an edge to Shaw’s game: he tackled with tenacity and ran with determination. And he seemed, at times, exasperated by the lack of movement of his teammates.

“I think sometimes the tempo was too slow for what we’re about,” Shaw told the club’s website after the game. “We need to be moving the ball and getting between the lines, giving it out wide to the dangerous players we have and creating more chances.” 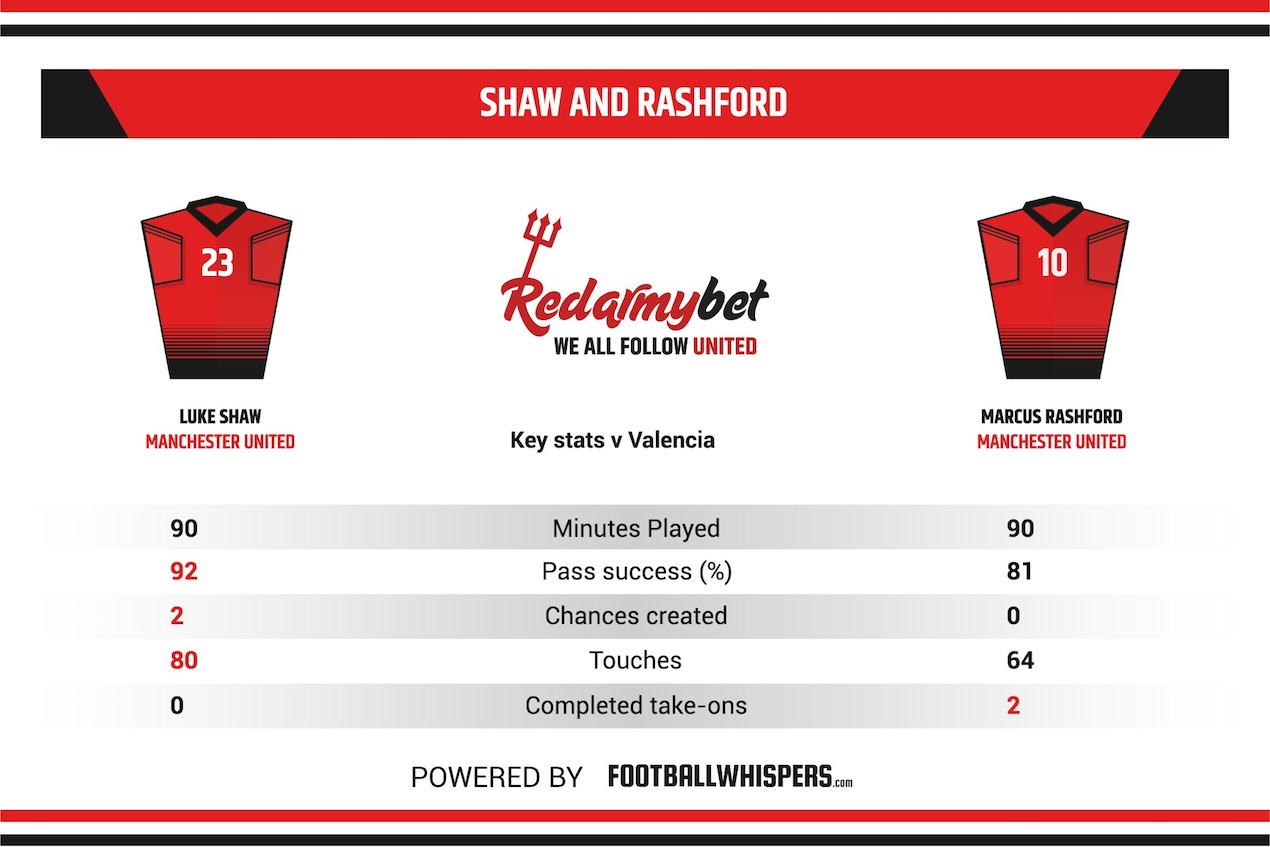 For much of the game, that is what Shaw attempted to do. He was, like Rashford ahead of him, at the very least attempting to inject some energy into Manchester United’s often sterile, lifeless display.

Rashford, who has found starts and goals difficult to come by so far this season, was unfortunate by the end not to have scored against Valencia. He was, undoubtedly, United’s most lively attacking player.

He succeeded with 67 per cent of his attempted dribbles and had more shots – six in total – than Lukaku and Sanchez. If anyone was going to break through a resolute Valencia defence it was Rashford. He struck the bar from a free kick in the second half and tried, ultimately unsuccessfully, to create chances for himself and others throughout.

That is far more than can be said for Lukaku and Sanchez, who alongside Rashford made up United’s front three. The former was static in his central role, offering very little for those around him to work with. Sanchez, meanwhile, looked as he has for most of his United career: uninspired, lethargic and apathetic.

United to beat Juventus in their next Champions League clash at 3.15 with RedArmyBet*

Perhaps, then, Rashford’s performance against Valencia warrants a more regular place in Mourinho’s starting lineup. He is, of course, still only 20, and there are clear improvements to be made.

But when other attacking options are playing with such a lack of intensity, when they are so evidently going through the motions, it makes sense to reward those who provide something different.

Mourinho will likely have been impressed by Rashford’s willingness to work, too. He regularly tracked back to help out Shaw and attempted five tackles across the 90 minutes. He was successful with three, but it is indicative of his desire to make an impact that this total was bettered only by Marouane Fellaini.

For United, there were few positives to take away from Tuesday night’s dismal goalless draw. But the promise shown by two younger players, both of whom have been doubted, will encourage those fans hoping to eventually see some light at the end of this long and very tedious tunnel.