Manchester United dropped further off the pace in the title race on Saturday after being held to a 1-1 draw with Wolverhampton Wanderers at Old Trafford.

Fred opened the scoring with his first goal for the club but last season’s Championship winners hit back, Joao Moutinho netting a superb equaliser as the joy in the Stretford End turned into murmurings of discontent.

It was another immensely frustrating afternoon for Alexis Sanchez, the Chilean once again failing to produce the level of performance United fans had expected on a regular basis when he was signed in January.

Ineffective, enigmatic and in danger of being dropped; our friends at Football Whispers analyse Sanchez’s ongoing slump.

Keep this up and Sanchez will soon be mentioned in the same breath as Memphis Depay and Angel Di Maria. The Chilean did not cost United anything in terms of a transfer fee, but he is happily pocketing a rumoured £500,000 a week.

His performances, however, fall way short of justifying such an exorbitant salary.

Back United to score in the first 10 minutes against Derby at 4.50 with RedArmyBet*

There were questions marks at Jose Mourinho’s decision to reinstate Sanchez to the starting line-up for the Wolves game. An unused substitute during United’s 3-0 win at Young Boys midweek, some felt as though Sanchez would again take his place on the bench with Anthony Martial perhaps being rewarded after scoring his first goal since January.

But it wasn’t to be. Emblematic of the malaise that has afflicted Martial since Sanchez’s arrival, the Frenchman was dropped in the South American’s favour.

Perhaps now, after his latest ineffectual shift on the left wing, Mourinho will consider taking the former Arsenal forward out of the line-up for the foreseeable future.

After all, with Martial, Luke Shaw, Marcus Rashford and even Paul Pogba, Mourinho has proven willing to give United’s stars the chop if they have failed to meet an acceptable standard. And Sanchez should be no different.

While at least some of it can be attributed to Sanchez playing on the left to accommodate Romelu Lukaku through the middle, the 29-year-old’s stats reflect his depleted productivity in the final third.

⚽️ We're back in action in 2 days, against Derby County in the Carabao Cup…

Indeed, there has been a dramatic drop in Sanchez’s xContribution (xG + xA). Between November 26 last year – while still playing for Arsenal – and March 5, Sanchez was averaging 0.71 xContribution per 90. However, since then, it has dropped to 0.39 per 90. During the first period, he ranked sixth in that particular category but has dropped to 40th since.

It’s clear that the wide left berth in United’s 4-3-3 has not brought out the best in Sanchez. In 23 appearances for the Red Devils, Sanchez has scored just three times, two of which came in the league and one of which was a rebound from his own missed penalty against Huddersfield.

Outside of that effort, Sanchez has only the found the net twice; at home to Swansea City and against Tottenham Hotspur in the FA Cup semi-final. There have been flashes of brilliance, of course. Sanchez was instrumental in United’s comeback 3-2 victory over Manchester City last season with two assists, while his inch-perfect cross for Lukaku in the recent win at Burnley offered a glimpse of the kind of service he can provide.

However, United fans will rightly argue that, for the Premier League’s highest-paid player, the odd eye-catching contribution is not enough. Sanchez’s arrival in January was supposed to have breathed new life into the United attack. Instead, it’s been quite the opposite. Not only has Sanchez struggled for consistency, but his continued presence in the team has also hindered the progress of Martial and Rashford. 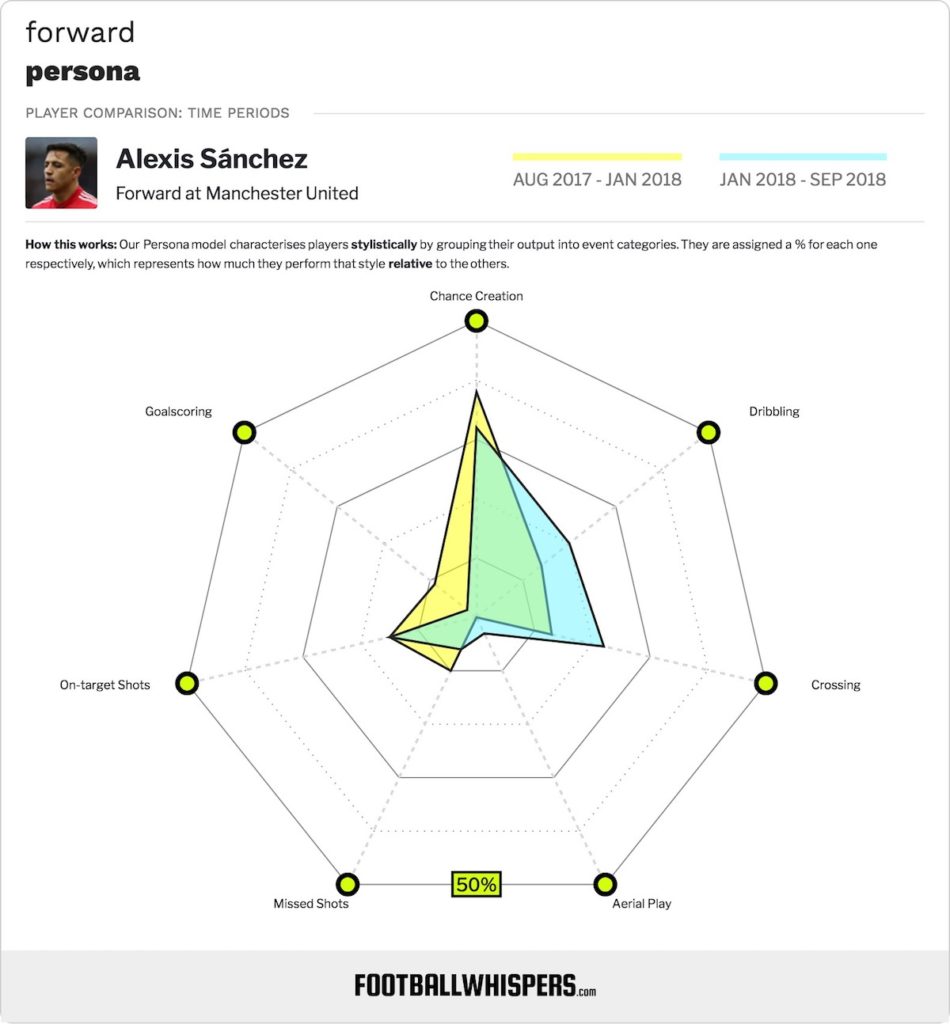 In the player persona radar above, we have compared Sanchez’s last few months with the Gunners to his United career. As you can see, there are a few striking differences, notably his increased crossing output at United and his goalscoring threat has taken a significant hit. With United, he has been attempting more dribbles but creating fewer chances.

Sanchez was devastating when Arsene Wenger deployed him through the centre at Arsenal. In the 2016/17 campaign, he scored 30 goals in all competitions and was shortlisted for PFA Player of the Year. It was the form that attracted both Manchester clubs to him in the first place and, while we can only guess at what Pep Guardiola had planned for Sanchez at the Etihad Stadium, it’s difficult to imagine the City manager overseeing quite such a prolonged period in the doldrums.

United are currently 2.20 with RedArmyBet to finish in the top four*

Having enjoyed an extended break during the summer after Chile’s failure to qualify for the World Cup, the hope was that Sanchez would hit the ground running in the new season, but his continued indifference has led some to surmise that he is ‘finished.’

Such a declaration is over-dramatic. Sanchez will turn 30 in December and has plenty of time with which to salvage his United career. However, with a possible spell on the bench possibly forthcoming, he may be forced to use his time on the pitch wisely and display a ruthlessness and cutting edge that has been largely absent during his time at Old Trafford.

Jose should look closer to home for the source of United’s malaise.