After playing out a goalless draw with Liverpool, Manchester United travel to Crystal Palace on Wednesday night hoping to rediscover their scoring touch.

A point against the league leaders means United dropped down into fifth with Arsenal moving up into fourth after a 2-0 win over Southampton.

With the Gunners likely to beat Bournemouth at home midweek, Ole Gunnar Solskjaer’s Red Devils need to take all three points away from Selhurst Park to keep up the hunt for Champions League football next season.

Encouragingly, Solskjaer has a perfect record on the road since his appointment in December, leading United to seven consecutive away wins in all competitions; their best run since 2002.

United to win next three matches (Palace, Southampton and Arsenal) – 7.00 with RedArmyBet*

And encounters with Palace under the floodlights at Selhurst Park usually make for absorbing Premier League theatre, especially given the Eagles’ recent form (unbeaten in their last six games in all competitions).

Last season, a stunning stoppage-time strike from Nemanja Matic completed a brilliant comeback victory for United. Trailing 2-0, Chris Smalling, Romelu Lukaku and Matic all found the net in a whirlwind second half.

That night, as United began to seize control and dominate possession, Palace sorely missed Wilfried Zaha, namely the Ivorian’s ability to carry the ball and drive his side high up the pitch or draw fouls to relieve pressure.

However, the 26-year-old, who managed only two Premier League appearances for United during a disappointing spell at Old Trafford, will be fully fit and ready to lead Palace’s attack on Wednesday. 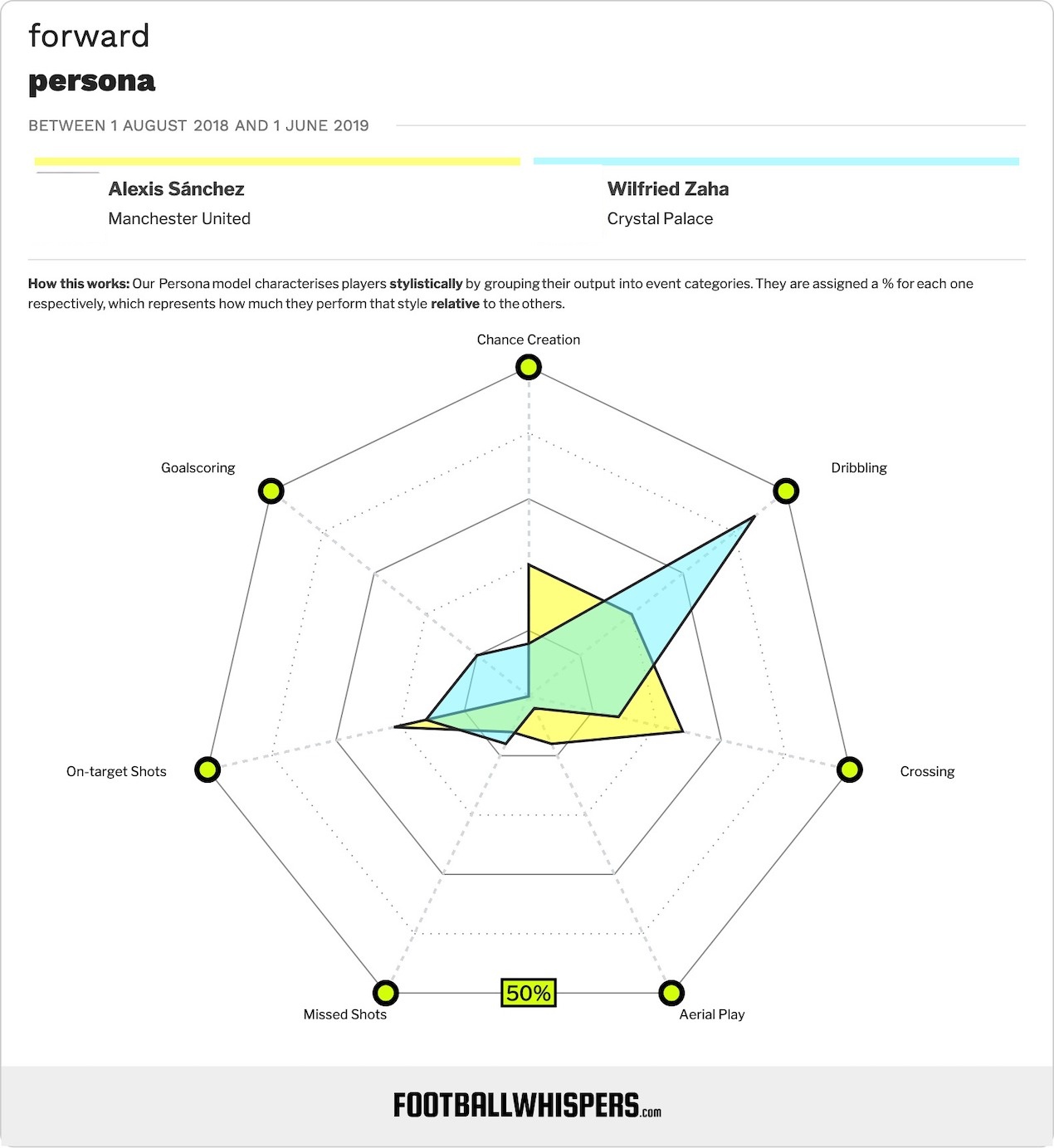 Zaha has been back to his brilliant best recently, too, scoring four times in his last three league outings (although the earliest of those, at Southampton, ended in his dismissal for sarcastically applauding referee Andre Marriner).

Zaha is Palace’s talisman and will once again be the chief source of inspiration on Wednesday. Alexis Sanchez, on the other hand, will hope to capitalise on United’s recent spate of injuries by producing a match-winning performance and nail down a starting spot under Solskjaer.

Not nearly as influential as United fans hoped he would be after joining from Arsenal in January 2018, it’s starting to feel as though the Chilean’s time is running out. Now, though, with Jesse Lingard, Juan Mata, Marcus Rashford and Anthony Martial all having picked injuries over the last couple of weeks, Selhurst is as good an opportunity as Sanchez has had to prove himself.

This season, Zaha has seven goals while Sanchez has managed just one. Granted, the Palace forward has played 2064 minutes compared to the South American’s 662 but Zaha’s 0.3 goals per 90 mins still eclipse Sanchez’s 0.13.

Sanchez to score and United to beat Palace WAS 4.00, NOW 5.00 with RedArmyBet*

However, a more detailed look at the underlying stats paints an interesting picture.

As one of the English game’s most devastating dribblers, it’s unsurprising that Zaha’s 3.09 successful take-ons per 90 comfortably surpasses Sanchez’s 1.63, especially given that the latter is now 30 and seems to have lost half a yard of pace and some of the agility that made him such an explosive threat at Arsenal.

But Sanchez still possesses plenty of craft and vision and it’s intriguing that, per 90 minutes, he outperforms Zaha in a few categories. For example, Sanchez boasts more expected goals and expected goals assisted than the Palace man and has created three times as many ‘big chances’ despite having been on the pitch for 1402 minutes fewer.

However, whereas Paul Pogba and Marcus Rashford have been transformed under Solskjaer, the Norwegian has not been able to breathe new life into Sanchez in the same way.

Despite a couple of key contributions, the 30-year-old still looks like lost in this United side, desperately trying to blend in and recapture the inspiration that saw him score 30 goals in all competitions in his last full season at Arsenal. 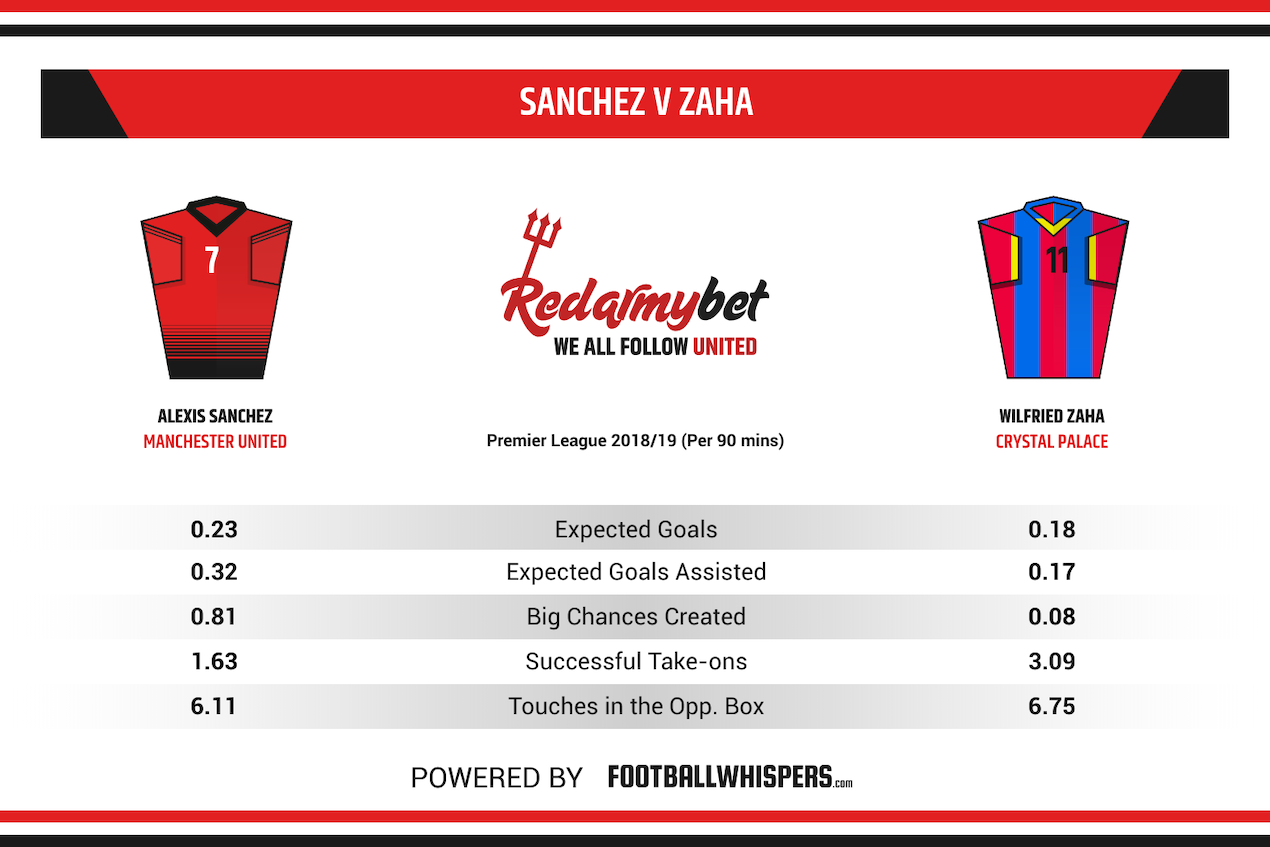 There was hope of a resurgence after he scored the opening goal in January’s FA Cup win over his former employers at the Emirates, but he has spent the majority of the time since then on the bench and struggled on his only league start in 2019, being hooked off after 67 minutes in the win at Leicester City.

But with so many key attacking players out, Sanchez must step up and make the most of the prominent role he is likely to be afforded in the next few weeks, starting with Palace on Wednesday.

Of course, while United’s travelling fans will hope to see him light up the attack, they will be acutely aware of Zaha’s threat at the other end. Victor Lindelof and Chris Smalling have looked comfortable as a partnership recently. Solskjaer will need both defenders at their best to stop him.

For all the latest odds on Palace v United including special bets and enhanced odds visit RedArmyBet.com

VIDEO: 5 players with a point to prove vs Spurs