They complement each other well.

Not since Rio Ferdinand and Nemanja Vidic departed Old Trafford nearly five years ago have Manchester United had a settled centre-back pairing.

In reality, it’s been even longer. Neither were 30-plus league-games-a-season in their final few years at the club and, by now, it could even be getting onto a decade since United had a week-in, week-out duo at the heart of defence.

As this season draws on, it looks increasingly like Chris Smalling and Victor Lindelof might be nailing down that partnership for themselves. While they may not be Ferdinand and Vidic at their peak, they’ve shown under both Jose Mourinho and Ole Gunnar Solskjaer that they’re up to the task.

Similarly to the two United central defensive legends, part of it is because of how they complement each other.

Based on the start of their respective United careers, it’s surprising that Smalling and Lindelof have become starters at all. Injury and form disrupted Lindelof’s debut season, something that his English teammate is all too familiar with, struggling to become a starter until he’d already been at the club for half a decade.

Fans who’ve watched Smalling since his arrival back in 2010 won’t be surprised to hear that the mental side of the game has been a problem for him.

“I put so much pressure on myself to perform because I know what I’m capable of,” the 29-year-old said earlier in the year. “A lot of it is mental [strength]. That’s why I see a sports psychologist.”

Watching Smalling this season, compared to previous years, one gets the sense that the sports psychologist is definitely earning their paycheck. The centre-back’s performances have been far more consistent of late, and it’s allowed him to help a less experienced head cope in matches.

“I work a lot on visualising,” Smalling revealed. “I have different mantras before games, ‘1-2-3, Dominant, Aggressive and Loud’. Be loud in the game, be dominant and aggressive.

“If I’m constantly loud, getting at the other centre back, getting at the midfielders, saying, ‘Come on, push up’, I can take away all that noise of the fans — there might be boos — and I can be mentally free of any pressure, league tables.”

It’s interesting that ‘dominant, aggressive, loud’ is one of Smalling’s mantras, as they are traits that haven’t always seemed to come naturally to him. Alongside Lindelof, though, they’re crucial.

The 23-year-old Swede also isn’t someone who appears to be a naturally loud and dominant central defender. When the pairing needs a player to step up onto the back of strikers, it tends to be Smalling who takes on this role, with Lindelof being the one to drop off. 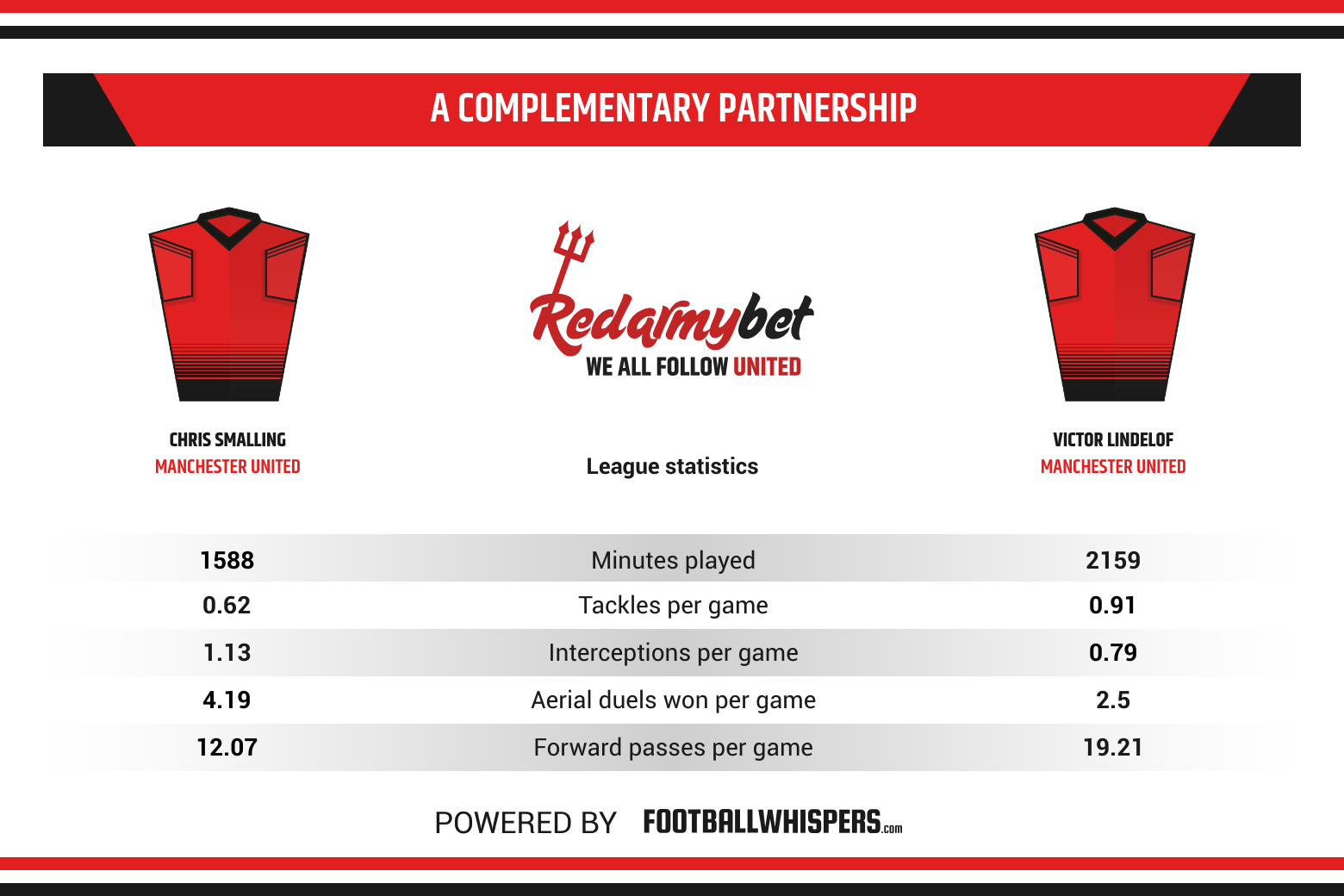 Lindelof is also a less physically capable player than Smalling, especially in the air, but, again, the Englishman is prepared to pick up that side of things.

“I thrive off pressure. I like the physical side,” Smalling has said. “If someone wants to be physical, I’d back myself in a race.”

Lindelof, though, picks things up when it comes to ability on the ball. Smalling has found himself left out of England’s plans, with other centre-backs like John Stones or Harry Maguire thought to be valued higher because of their on-ball capabilities.

Smalling probably gets more criticism for his touch and passing than he deserves. While not perfect, and slightly lacking in vision for a pass, he’s confident enough with it at his feet, and that’s a significant part of the battle.

Often, when a defender makes a bad error on the ball, it’s because they tighten up, take a bad touch that puts them in danger, and panics. A confident — not over-confident — player won’t do this in the first place and, if they happen to find themselves in trouble, they’ll be able to think their way out of it.

United to reach the Champions League final at 7.00*

A centre-back partnership of a slightly more proactive, slightly tougher man and one who is excellent on the ball… Does this mean that Smalling and Lindelof are a new (slightly lower budget) iteration of Vidic and Ferdinand?

Although it’s a compliment to draw the comparison, it’s also a little insulting. Smalling and Lindelof are their own player, and the respect they deserve doesn’t just come from their performances, but in overcoming their difficult starts to their United careers.

It might not be a partnership that’ll go down in history, but it’s one that’s established itself and might be hard to displace. And that’s something United haven’t had in a relatively long time.