A first real challenge for Solskjaer

Ole Gunnar Solskjaer became only the second United manager to win his first five games in charge, placing him in esteemed company alongside Sir Matt Busby, even if he’s yet to face any team of real quality.

However, while it was nice to progress in the FA Cup – our only realistic chance of silverware – it wasn’t entirely deserved. Reading actually enjoyed the greater share of possession (59%) than us and moved the ball quicker, and had they a striker who could finish chances, the clean sheet would have been in peril.

Our only shut out in four league fixtures under Solskjaer came against Newcastle (only Huddersfield have netted fewer than the Magpies this term) as we even conceded against the Terriers, and so the last thing we needed was injury concerns at the back.

Such problems may not be as pronounced as a month or two ago where there was a full blown crisis as the treatment room operated at full capacity, but Eric Bailly serves the final match of his suspension, Marcos Rojo is out, while Chris Smalling’s a doubt.

That should ensure Phil Jones and Victor Lindelof are the duo at the back, though at least Paul Pogba is expected to feature having shaken off a slight knock. 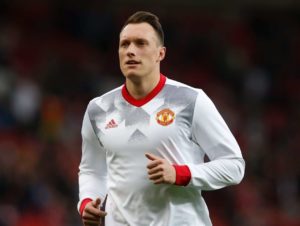 Phil Jones could feature against Spurs.

Competition for places up top

The FA Cup win over Reading saw Alexis Sanchez make his first appearance under new management and despite having just returned from a hamstring injury, he looked far happier and more interested and there were no hands sluggishly rested on hips.

The hope is that his lack of high-end performances for us is purely down to Jose Mourinho’s instructions, as he’s the type of player that has to bustle with energy to be effective and he can’t do that within the confines of a tactical straight jacket.

However, despite increased effort and producing an assist, the Chilean hardly pulled up any trees either and has more convincing to do if his future is to remain at Old Trafford and contest Anthony Martial for a starting berth.

Could Sanchez feature against Spurs?

Romelu Lukaku has clearly relished the challenge being provided by Marcus Rashford’s recent goal-scoring exploits, with the Belgian netting once more versus Reading to make it three in 137 minutes under new management.

However, his first touch did let him down on another occasion beforehand as he could have registered on the scoreboard earlier, and despite largely taking his chances, should find himself on the bench behind Rashford.

The young Englishman’s confidence appears to be soaring after being directly involved in 10 goals over his past nine matches across all competitions, including four goals in his last six league appearances, and is a much healthier price than Lukaku at the prices given the Belgian’s flat-track bully reputation.