Diogo Dalot, Scott McTominay, and Andreas Pereira all started in the FA Cup against Reading, but the big news was the introduction of youth product Tahith Chong for the final half-hour for his first senior appearance.

Was this just a promising youngster being given a memorable run-out in front of an appreciative home crowd, or could this be something more, a glimpse into United’s future?

Chong came on for Juan Mata and filled his position at the right side of attacking midfield.

A big advantage of the 18-year-old fulfilling that role is that he’s a different type of player to United’s other first-team options.

Both Mata and Jesse Lingard tend to drift centrally into the No.10 area when they play there. Right-footers Anthony Martial and Marcus Rashford struggle to be at their most effective when they have to go wide to be on their stronger foot.

As a left-footer, and a more out-and-out forward than Mata, Chong mirrors the attacking threat that United already have on their left flank with Rashford, Martial, or Alexis Sanchez.

United also showed impressive flexibility across their forward line when Chong was on the pitch. In the final stages of the match, he, Romelu Lukaku, and Rashford interchanged positions across the front three. 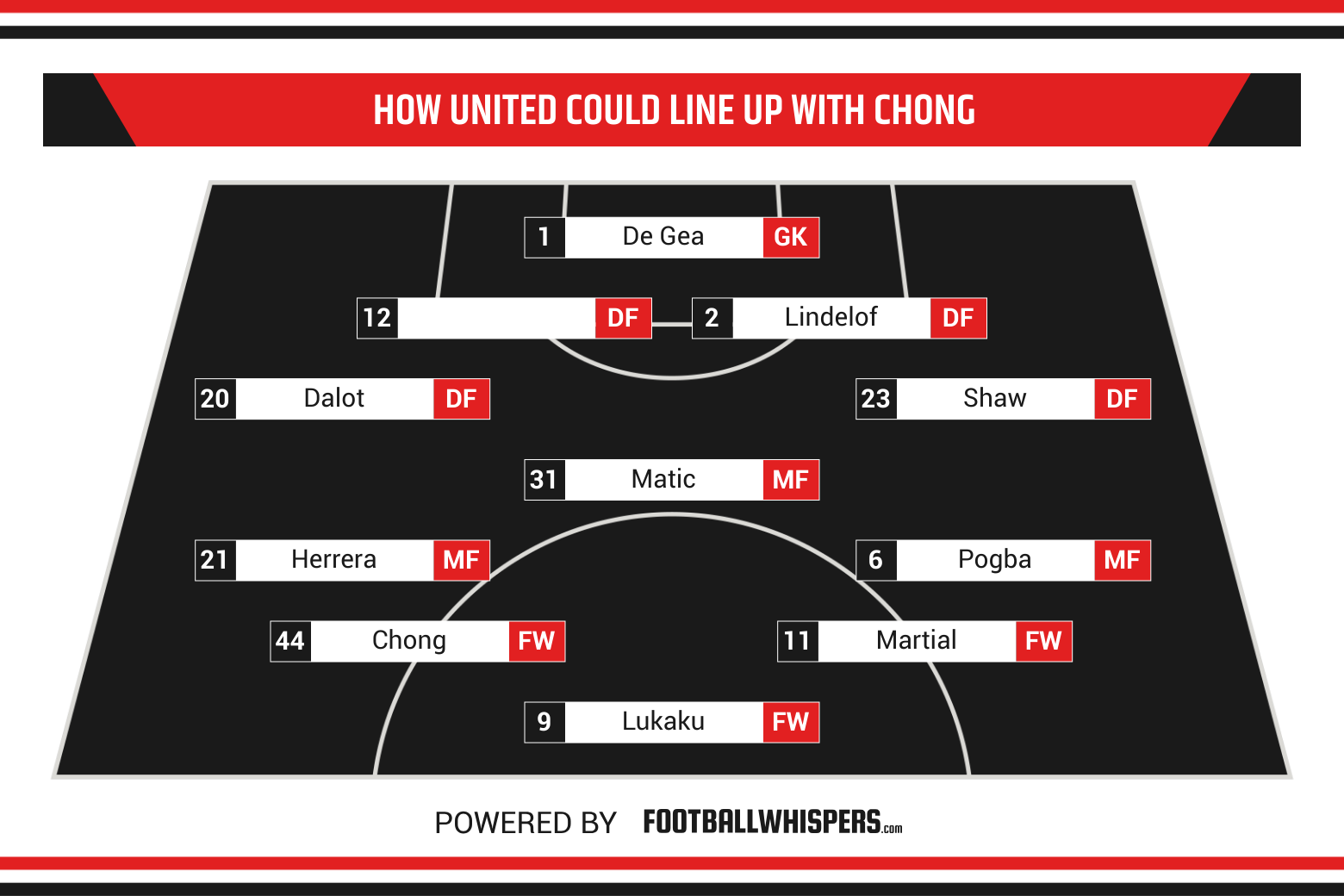 Chong and Rashford both understand how to play as a central striker, while Lukaku understands how to play in a wider role. This could be a nightmare for defenders, always having to think about which man they should be picking up and how far to track them.

If Lukaku is dropping deep, is that because he’s making space for Rashford or Chong to fill his space, or is he just dropping deep? If Chong moves centrally, should the defending left-back follow hm, or is Lukaku going to drift out wide to fill that space?

This doesn’t mean that the Dutch teenager is suddenly going to become a United starter, but it’s a big reason why he could be kept around the first-team squad in the near future.

“He had two or three really good moments,” Solskjaer said after the match, “as you do when you’re young. You don’t run the game as a first performance for a 19-year-old.

“But he got the crowd going, and has shown one or two glimpses of what he can do, he has in training anyway.

“And the game wasn’t won, it was 2-0 and was still go out there and perform. It’s not like it was 4-0 and it’s just a party, so he did well defensively as well and I think he’ll remember this for a long, long time.”

The interim manager is right to highlight his defensive work. Reading were surprisingly good in the third-round tie, and looked comfortable on the ball throughout — on the evidence of that one match alone, it’s hard to believe that they’re 23rd in the Championship.

Chong needed to be switched on defensively, even more so considering his position-switching with Lukaku. When the teenager moved into the central striker role temporarily, he fulfilled that position’s responsibilities, knowing who to press, how to press, and when.

That points not just to his work-rate, but to his tactical acumen and discipline in learning the duties of several roles on the pitch, which will stand him in good stead in his quest for more regular first-team game time.

“Obviously it was a special moment,” Chong told MUTV. “I couldn’t enjoy it more than I did.

“He [Solskjaer] just said enjoy it, get on the ball, try and get a few touches and just enjoy the game.”

It wasn’t just Chong who enjoyed it, it was all of Old Trafford, and it won’t be a surprise if they’re enjoying another of Chong’s performances sometime soon.

Help wanted: Where United need to upgrade in the short- and long-term