Been a while since my last official Choccy’s Diary, I stopped doing it when David Moyes took over at United, as I felt he probably had enough on his plate without having to deal with my mischief, hopefully I’m not too rusty.

I’ve still got it. Somewhere. 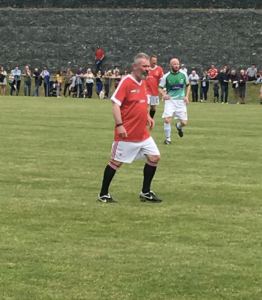 Last weekend I played in a benefit game over in Dublin, Wayside Celtic Legends versus United Legends in aid of Ger Hayden who has MS, he’s my age 54 and is a legend at the football club. It was a good day and a good turnout with the likes of Clayton Blackmore, Sammy McIllroy, Frank Stapleton, Denis Irwin and a few others representing United.

The game was interesting to say the least, they brought on their best players which helped them scrape over the line, despite Keith Gillespie bagging four goals for us! It was an enjoyable experience and I even remembered to put my factor 50 sun cream on.

We managed to see the Champions League final in a very pro-United environment. Some decisions by players you just can’t legislate for. What amused me in particular about the first goal Liverpool conceded were the protests by the goalkeeper and Jordan Henderson as though Benzema had done something wrong. As soon as the ball was in the keeper’s hands the referee’s playing on, the balls in-play so he’s not offside. Now if Benzema had kicked the ball out of the keeper’s hands then fair enough, but he didn’t, he threw the ball out and Benzema stuck his foot out at a very timely time and the ball rolled into the back of the net.

Liverpool came back into the game and scored a cracking goal, it was well balanced until the goal by Gareth Bale which obviously came off for him, sometimes you try things like that and they come off, to be honest that’s exactly what I would have done in that situation!  The third goal was inexplicable as it was just a lapse in concentration, I like the fact Jurgen Klopp wants his defenders and goalkeeper to get the ball out of defence as soon as possible with quick, attacking football, which is what got them to the final and I think the keeper is already thinking about what he’s going to do when he gets the ball. You can’t legislate for that, people say it’s this and that, but it’s football, everybody makes mistakes. Karius has had a good career, he’ll continue to have one, whether that’s at Liverpool is another matter.

I’ve seen the Bale to United rumours and I’m not that keen, he’s had a few injuries, the money that’s been spoken about seems vastly inflated, will he make a huge difference? I’m not so sure, I think there’s other areas United need fortifying but it wouldn’t surprise me if that transfer went through.

Visit RedArmyBet.com for the latest odds on transfers

Jose’s new appointment could be a positive step.

Kieran McKenna was highly recommended by John McDermott at Spurs, he came to United with a good reputation and looks as though he’s been identified as someone who will be useful to Jose’s coaching set up. It must be amazing for Kieran and also it gives other people within the club other opportunities, I believe Neil Ryan is going to become the under 18 coach, which will be very good for him and the players too.

Looks like I may have caused a small furore on Twitter when I mentioned how Jamie Redknapp’s dad’s dog knew more about football than Jamie! Sometimes you’re influenced by media situations and I think it’s right that other points of view are put across, I try to put them across in a way that’s poignant and humorous but maybe I’m not always successful. If someone had said something similar about myself I would have been made up about it. I’d have been liking it and replying thanks for spending some time to think about me. Not sure everyone has that same point of view. Being relatively new to the world of Twitter, what amuses me is you can make a comment and a national newspaper will make an article out of the tweet, comments, replies and whatever else. In previous Choccy diaries I’ve appeared in many articles in the national press because of things I’ve said – and a number of things I’ve made up!

The World Cup is here. Apparently.

The World Cup isn’t far off but to be honest I’ve not paid too much attention to who’s playing who at what time, I’ve not really looked at the posters in the various toilets I’ve been in. I like to watch the World Cup, I like to see good football and good teams playing well, the fact of where it is in terms of the climate should suit most of the teams, I think it could be a really good tournament and I fancy Spain to lift the trophy.

Waiting for the call.

Very surprised at the Zidane news, I got a text off my friend who said there’s a vacancy at Madrid and at first I thought they’d sacked him. My friend asked if anyone had been in touch with me from the Bernabeu to inquire about my availability. I asked if the Bernabeu was a pub in Edinburgh? Did I forget to take a glass back?

Check out the latest World Cup odds on RedArmyBet.com

Five Things We Learned From United’s Win in Turin

A Look at the Opposition: Premier League – United vs. West Ham Betting Tips and Enhanced Odds