The stats behind Rashford’s incredible form under Solskjaer

The England striker has been on fire since Ole took charge.

Marcus Rashford marked his 100th Premier League appearance in style on Sunday, scoring the only goal of the game as Manchester United earned a hard-fought three points against Leicester City at the King Power Stadium.

That strike took the 21-year-old forward’s total league goals to 26. And, when you add in his 14 assist, the youngster has impressively been involved in a goal every 2.5 Premier League games on average; not bad for a striker still learning his trade and with his best years well ahead of him.

The caretaker manager has overseen nine wins and a draw from his ten matches in charge and is increasing his chances of landing the job full-time at the end of the season.

Solksjaer has adhered to many of the traditions valued most at the club during his short tenure, not least implimenting an attacking style of play, in stark contrast to the cautious approach espoused by Jose Mourinho, and Louis van Gaal and David Moyes before him.

Another of the key tenets of the United identity Solksjaer has proved particularly sensitive to is the club’s proud tradition of putting faith in young, academy-bred players at first-team level.

While Rashford featured regualrly under Mourinho, he was often fielded wide on the left, rather than in his preferred central striker’s role, and was rotated in and out of the side. 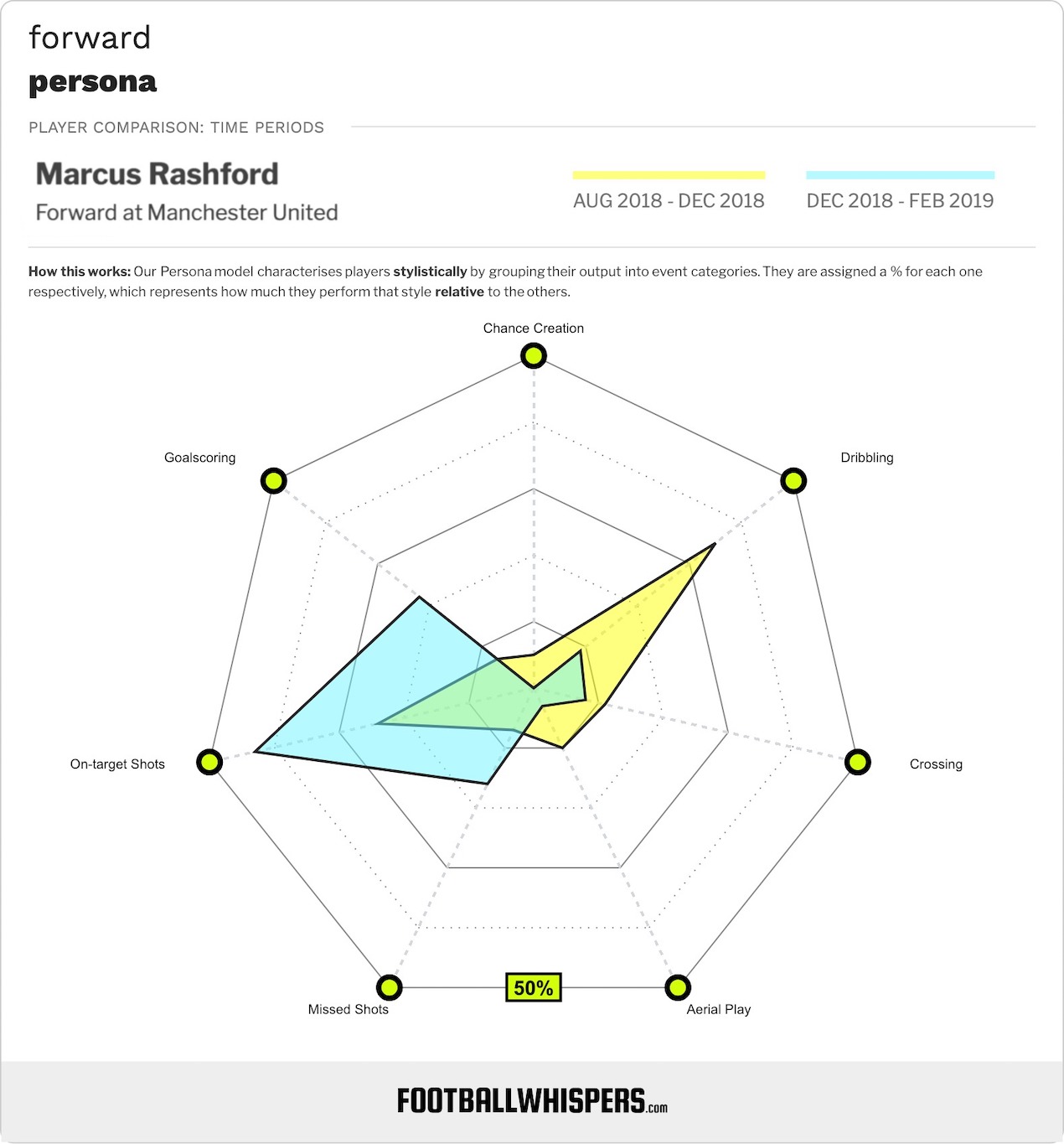 Under Solskjaer, Rashford has led the line consistently, and he is repaying his manager’s faith with key contributions week on week.

In his 14 Premier League appearances this season while Mourinho was still United boss, Rashford scored just three goals and registered five assits. Since the Portuguese was sacked after December’s 3-1 defeat to Liveprool at Anfield, Rashford has scored six goals and provided one assists in only eight league outings.

As a result of his central positioning and United’s newfound, slick attacking play, Rashford is shooting much more often, raisning his average shots per 90 to 4.94 from 1.9. In turn, his expected goals average has improved vastly, too, up to 0.58 per 90 from 0.29.

United to Qualify for Quarter Finals of Champions League WAS 2.45 NOW 2.75*

And even though his remit under Solskjaer focuses more on his own scoring threat rather than creating chances for others, his avergae for expected goals has increased, from 0.19 per 90 under Mourinho earlier this term to 0.29 since Solskjaer arrived.

No longer burdended by a defensive workload, Rashford is required to make fewer tackles and interceptions of late. And his burgeoning confidence under the temporary manager is evidenced by the uptick in take-ons completed, from 1.16 per 90 to 1.87.

Where previously there were doubts over whether Rashford possessed the ruthlessness and sheer goal-power to be United’s first-choice striker, the England international is now one of the hottest hitmen in the country, with £75million man Romelu Lukaku reduced to just a back-up.

Solskjaer, a prolific striker himself during his playing days with United, has given Rashford one-on-one attention on the training pitch, working on the youngster’s movement and finising. And United are reaping the rewards.