With just days to go until the Premier League begins, fans will be quickly shedding their England shirts and national pride as divisions are re-established, and football fans commit their loyalty to their domestic clubs once more.

Throughout the season, RedArmyBet will be meeting your fantasy football needs every weekend.

With free entry and a prize fund of up to £100,000.00 the most difficult part is selecting the best of the Premier League to feature in your team.

Managers will have a team budget of £100m, and here at RedArmyBet we give you our top three United players that are certainly worth considering for your team.

One person that most fantasy players will be considering for their side is United’s David de Gea. Despite a disappointing summer at the World Cup, there is no doubt that the Sir Matt Busby Player of the Year 2017/18 is considered one of, if not the best goalkeeper on the planet.

After a shaky start to life at Old Trafford, de Gea faced his critics head on and has become a vital part of United’s squad. Known for his agility, reflexes and great acrobatic dives along with 18 clean sheets last season, £6m is quite a fair price. He has improved at an impressive rate, and after his nightmare in Russia, the Spaniard will be looking to prove his doubters wrong by delivering another excellent season-long performance with the Reds. 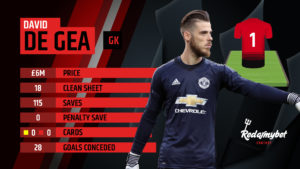 With a World Cup Winners’ medal now amongst his accolades, Paul Pogba will be heading to Old Trafford with a spring in his step.

Whilst the Pogba that we saw in Russia may not be the same player that United have seen recently, this season with the signing of Fred, the Frenchman should be free to drive forward after being constrained last season. With six goals last season and 10 assists, Pogba would be a great addition to your fantasy team. 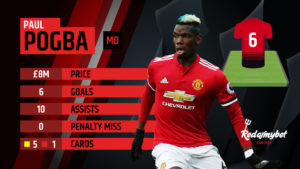 With 34 performances and 16 goals last season in the Premier League, Romelu Lukaku is one to consider for your fantasy team. The Belgian had an excellent World Cup campaign, scoring four goals whilst helping his country finish third in the competition.

With a combination of speed, strength and skill along with a consistently impressive goal scoring record, Lukaku would be a great forward to include. The 25-year-old is powerful in the air and is able to dominate defenders, and with improved service from United’s midfield, he will surely surpass last season’s goal tally. 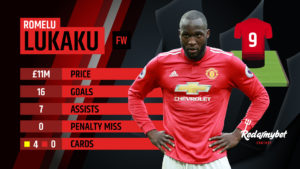 Whilst we can’t guarantee that this will be the Premier League season that United fans are dreaming of, why not make it memorable as the year where you won big, with a little help from some of the Premier League’s greatest stars.