Could Chris Smalling become the defender his talents once promised?

As the England squad return to their clubs after a lacklustre international break, one player who will have watched the action from the comfort of his own home is Chris Smalling.

Smalling’s last major international tournament was Euro 2016, which I’m sure many of you will have blocked from memory. The only good thing to come from the competition for the defender? In England’s final warm-up game, he scored his first international goal in a 1-0 victory over Portugal.

United are at 5.50 to win their next three Premier League games*

Fast-forward to 2018, and despite generally surviving each season with adequate campaigns, the centre-back was dropped from the England squad last year and failed to earn a seat on the plane to Russia. His replacements? The likes of a younger John Stones and Harry Maguire – the latter actually attended England’s Euro 2016 tournament as a spectator rather than Smalling’s rival.

The 28-year-old was deemed unnecessary for Southgate, who did not feel that he needed to change his defensive set up ahead of the summer tournament. He said:

“Chris is a man I respect a great deal, but I think we made that decision in November and I’ve not seen any reason to change the thinking on that.”

One thing that strikes me about Smalling is that he has never had a defining moment. There aren’t many games where I distinctly remember a ground shattering performance from the 28-year-old.

When Smalling was signed in January 2010, he was hailed as Rio Ferdinand’s successor and the signing was a big statement from Sir Alex that he had faith in the former Fulham defender. 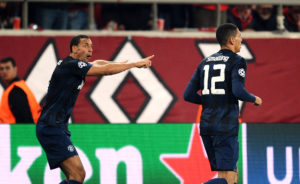 Since, Smalling has certainly risen to the top with numerous trophies to his name and is now an experienced part of the United squad.

However, despite guidance from the likes of Ferdinand and Nemanja Vidic, post-Fergie Smalling has failed to make his mark on United’s defence.

The reason why Smalling is still at United? In my opinion, David de Gea.

The goalkeeper has been the saving grace of United’s defence, masking numerous errors and inconsistencies within the back line.

That is not to say that Smalling is a poor defender, he is actually a good player but he lacks consistency. In addition, United have fell short when it comes to signing defenders, and the reason why Smalling is still cemented into the squad, and why he was part of numerous England squads, comes down to the question of – who else is there to replace him?

United face Watford this weekend, they are at 4.25 to win and for both teams to score*

For United, defenders have never been available at the right time, or like the transfer window just gone, the Reds seem to miss out on players for numerous reasons, having to stick with experience rather than getting a fresh defender that would possibly make less mistakes.

On the other hand, some fans may feel that Smalling has earned his place in the squad, with eight years of service, for the most part being injury free and still putting in some good performances. However, although Smalling has saved United on some occasions, along with finding the back of the net every now and then, he simply has bad tendencies that he struggles to shake off.

Take the Tottenham game for example.

After a full summer of pre-season and turning vegan (which he attributes to why he is injury free), Smalling should have returned to the Premier League looking to fight for his place in United’s defence, as well as proving to Jose Mourinho that although the manager failed in his quest to find a new defender, Smalling was still capable of performing at a good level.

However, the defender’s first appearance of the season which saw saw him partnered with fellow long-standing Red Phil Jones, saw him switch off as he allowed Tottenham to make it 3-0. 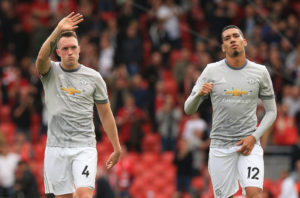 Smalling an Jones struggled against Tottenham.

His first-half performance was great, if not faultless, as United started the game with great energy but as the second-half began, Smalling struggled. He seemed uncomfortable in possession and failed to keep up with the likes of Lucas Moura, who netted the final goal.

Despite this, the 28-year-old has the self-belief that many players may lack, and he refused to doubt his capabilities after his England snub. Smalling said:

“…you don’t play for one of the biggest clubs in the world for as long as I have and won every trophy bar the Champions League without being able to do everything a top defender needs to do – be it playing or defending.”

With such confidence, Smalling now needs to prove that his statements are in fact true, and with United now looking to bounce back from a poor start to the season, this is the defender’s golden opportunity to prove to Southgate, and all his other critics, just why he is, in his own words, a “top defender.”

No Romantic Return For Ronaldo – Now We Can All Move On