Fancy being in with a shot of sharing a share of £25,000 just by declaring your love for all things Manchester United?

RedArmyBet’s World Cup first-round Fantasy game puts you in charge of selecting your best 11 plus subs for the tournament with a £100million transfer budget. And, best of all, it’s free to enter!

Click here to sign up for FREE and select your perfect team for the first round of fixtures.

But before you go loading your team up with Lionel Messi and Antoine Griezmann, our friends at Football Whispers have identified a starting side comprising solely of United players with a few familiar faces on the bench.

The best goalkeeper in the world playing for one of the three best teams in the tournament with Sergio Ramos and Gerard Pique in front of him, selecting de Gea is a no brainer.

La Roja have Portugal up first which should prove by far their biggest test in Group B before tackling lesser lights Morocco and Iran.

Matches between the Iberian neighbours tend to be cagey affairs with just 19 goals scored in the last ten meetings, six of which ended in draws. A low-scoring affair awaits, just what de Gea needs. 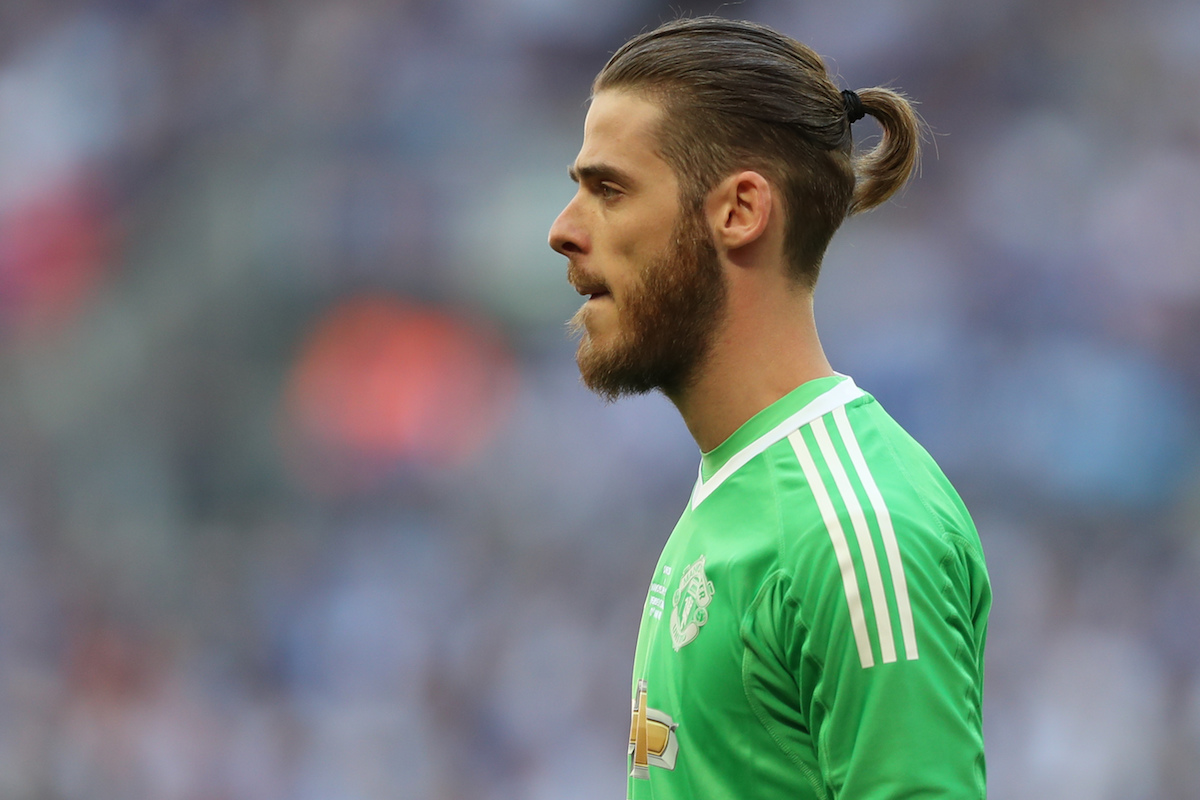 As it stands, Jones is the odd-man out among Gareth Southgate’s centre-backs but the England coach’s commitment to a back three, plus the ever-present spectre of injuries, means it wouldn’t take a lot for him to move quickly into contention.

There’s a reason Jones made it into the 23-man squad ahead of United team-mate Chris Smalling and it lies with his calmness in possession.

For United last season, Jones boasted a passing accuracy of 91.2 per cent and ranked 20th for accurate passes per game with 45.02. He’s an ideal fit for Southgate’s defence who will expect a quiet afternoon against Tunisia in their Group G opener.

It was an up-and-down debut campaign for the Swede at Old Trafford but he’ll need to be a tower of strength for his country in Group E.

For his Fantasy managers, the good news is Lindelof should start Sweden’s opener against South Korea on June 18.

The Swedes weren’t exactly defensively proficient in qualification, ranked 27th across UEFA for scoring attempts conceded per match with 12.83.

But they also showed during the 1-0 aggregate play-off win over Italy how rigid they can be at the back and will rightly be confident against shot-shy South Korea. 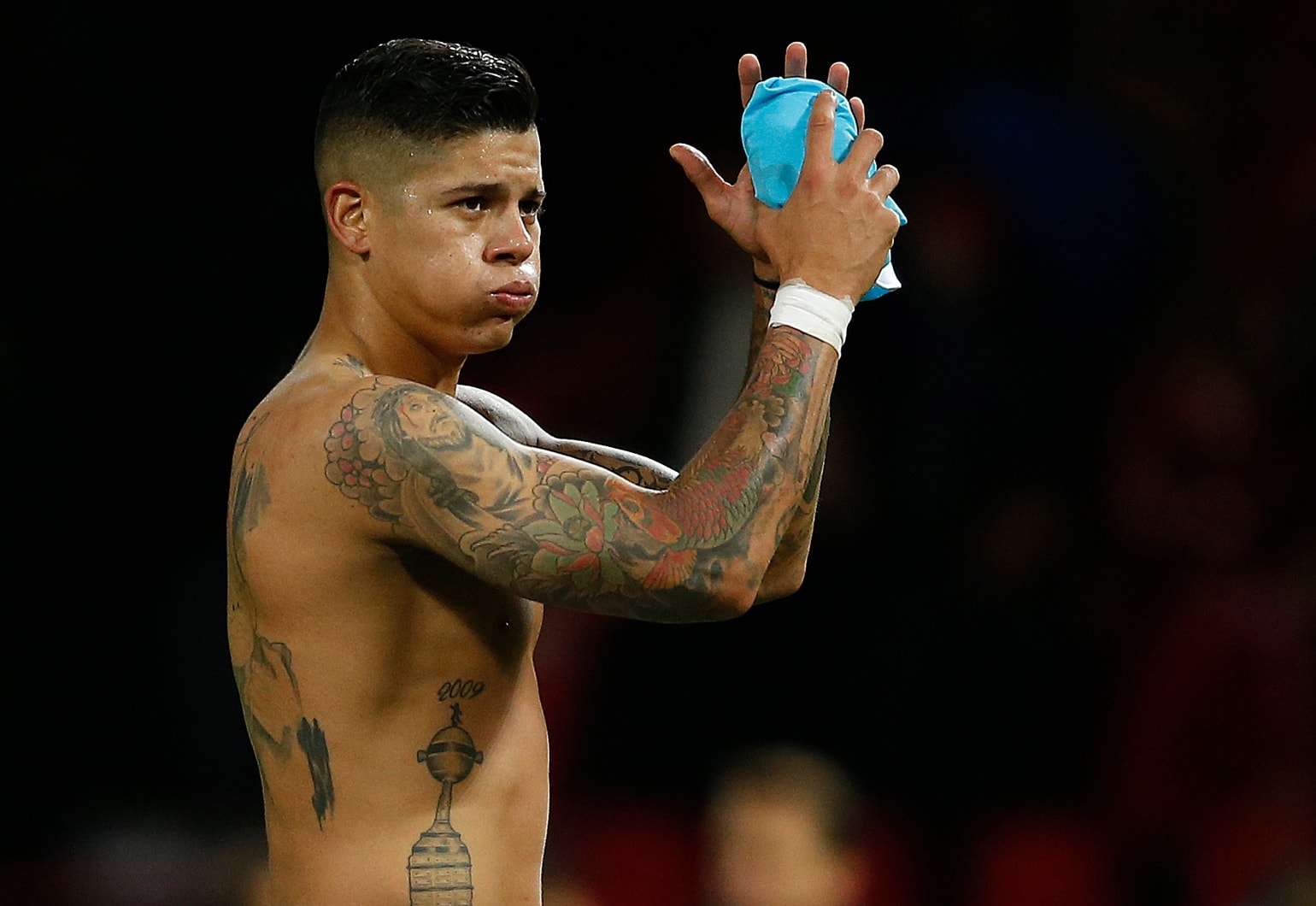 He may not be your automatic first pick in a Fantasy XIbut Rojo is cheap and plays for an Argentina side who will fancy their chances against Iceland in the opening round of Group D fixtures.

Argentina have a number of issues from front to back but they do have Lionel Messi and should be too good for debutants Iceland.

Although Rojo isn’t the first name on Jorge Sampaoli’s team sheet, the coach hasn’t identified his best defensive combination which means, with 56 caps, Rojo is the most experienced defender in the squad. What’s more, he can play both as a centre-back and left-back, so has every chance of playing a part.

Whereas Jones will have to wait his turn, Young appears a shoo-in for the left wing-back role which will prove crucial to England’s chances.

Southgate’s system is built around the wing-backs sticking to the touchline, providing width and delivering service to his forwards giving Young, a winger by trade, license to attack.

Young’s 0.14 assists per 90 was tenth among full-backs in the Premier League while he was 15th for expected goals contribution with 0.17.

Tunisia are unlikely to attack England with any great menace, affording Young the chance to get forward.

Matic is one of Serbia’s most important players and not just because of his position as one the squad’s more experienced individuals.

Much of their success in qualification was determined by maintaining a strong defensive core with Matic anchoring midfield in front of Branislav Ivanovic and the promising Nikola Milenkovic.

In terms of tactics and personality, Matic sets the tone for his nation and coach Mladen Krstajic places considerable responsibility with the 29-year-old.

He’ll be an automatic starter and with Costa Rica to come in their opener Serbia know a win is vital with favourites Brazil also in Group E.

His days as a Red Devil may be coming to an end but that doesn’t mean you can’t still appreciate Fellaini for all his distinctive talents.

In what should be a very good Belgium team, reported Arsenal transfer target Fellaini serves a vital purpose as the defensive midfield shield and is a major reason why Roberto Martinez took the bold step of leaving out Radja Nainggolan.

Fellaini’s potency in the opposition penalty area can also be unlocked by Kevin De Bruyne who led World Cup qualifying for set-piece key passes per 90 with 2.3. Against minnows Panama the Red Devils will be looking to boost their goal difference.

Pogba went into Euro 2016 with an enormous burden of expectation that he was going to be the country’s star in a glorious home triumph.

That, of course, didn’t happen as Portugal pulled off an upset and Pogba largely disappointed. But with the pressure on him lightened he should flourish in Russia.

Providing Didier Deschamps affords the former Juventus star enough midfield cover, Pogba will be permitted to attack and make the most of his best attributes in a very winnable group opener against Australia.

In qualifying Pogba ranked 14th for total scoring attempts per 90 with 3.85 and 14th for successful take-ons with 2.57. He should be an offensive threat. 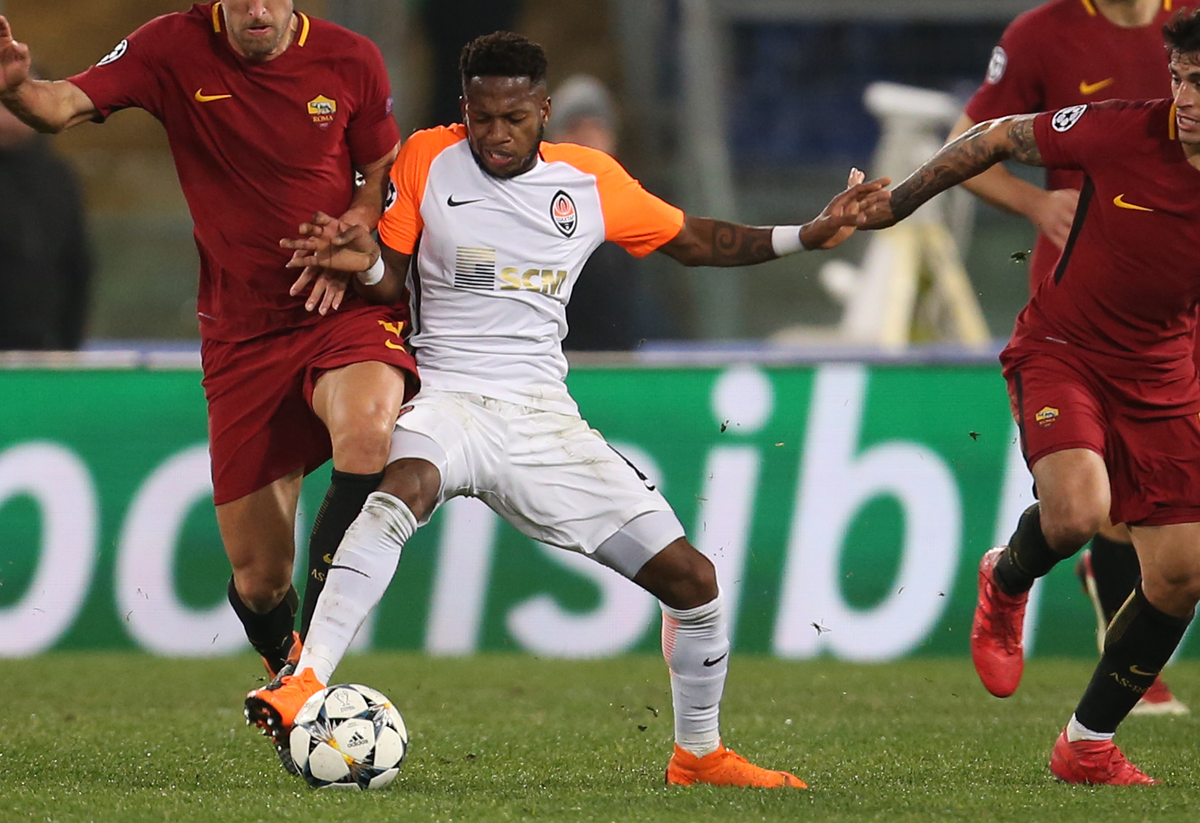 United’s new arrival suffered a slight ankle injury on the eve of the tournament meaning he’s a doubt for Brazil’s opener against Switzerland but, if he makes it, the £52million man will be out to show why Jose Mourinho went big on him.

Brazil coach Tite’s midfield options can be divided into attacking and defensive players. But in Fred he has someone who can knit Brazil’s play together.

There is huge competition for places but Fred offers something different to his international team-mates and could be called upon to pick apart a stubborn Switzerland side ranked sixth in the world.

Russia could be a difficult watch for some United fans frustrated with Rashford’s truncated career at Old Trafford. While he may not start Monday’s opener against Tunisia, all signs point to Southgate letting the 20-year-old off the leash at some stage.

Exhibit A was his brilliant strike in the final warm-up game against Costa Rica las Thursday as he was trusted with a central berth and allowed to express himself.

With captain Harry Kane and the more established Dele Alli ahead of him, the likelihood is Rashford will play the role of super-sub. But what a substitute he could be.

With one of the weakest teams in the World Cup up first in Panama it’s verging on the inconceivable for Lukaku to not score.

Belgium ranked third throughout qualifying for scoring attempts per game, with only Portugal and Germany averaging more than the Red Devils’ 21.6, while Lukaku’s individual 4.28 attempts placed him seventh.

He has service from De Bruyne and Eden Hazard and could do some serious damage before the Red Devils face England in their final Group G showdown. 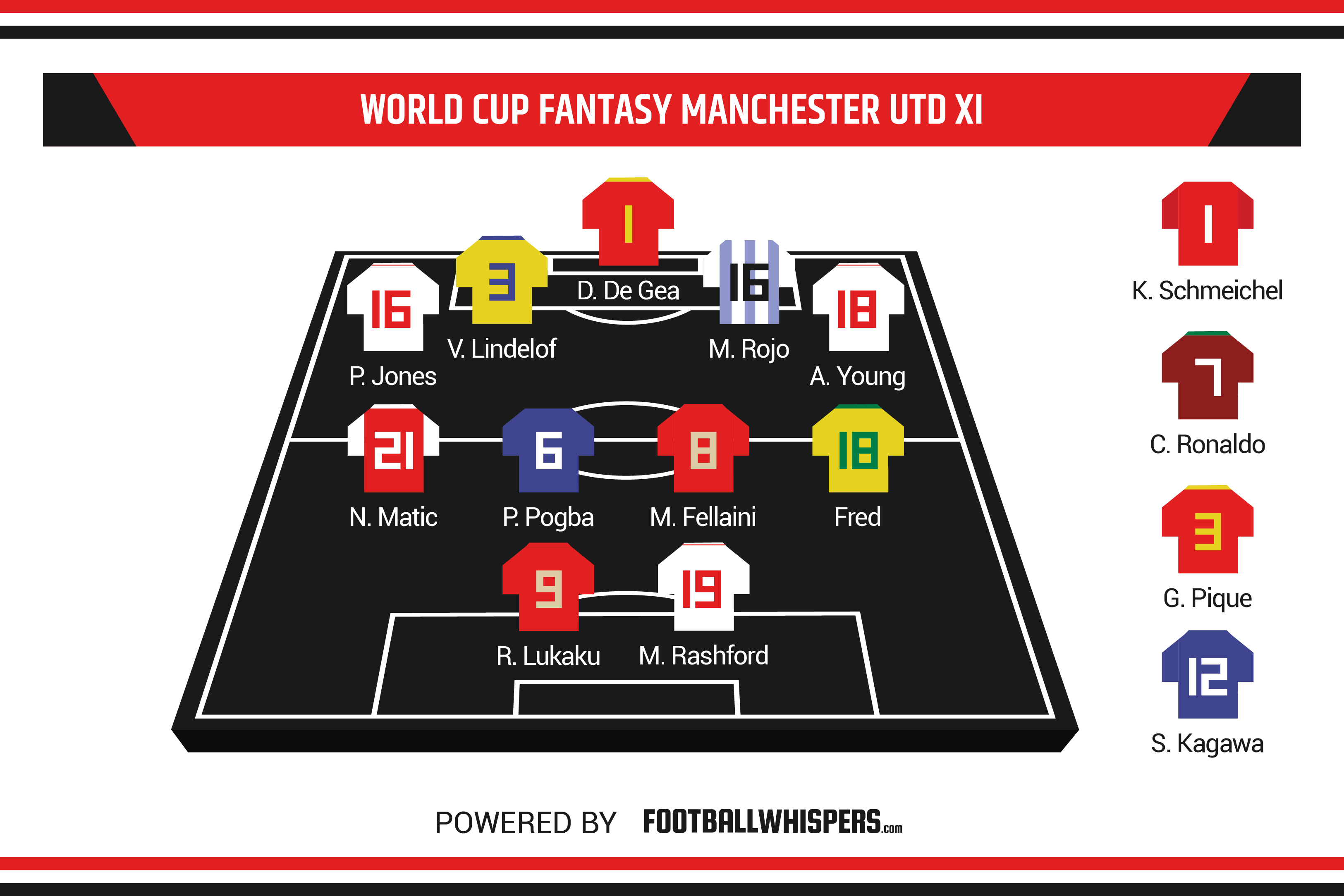 The United academy product will be starting between the sticks for the Danes who tackle minnows Peru to open their tournament.

Ronaldo led the world, yes the world, in qualifying for total goal contribution (goals and assists) with 2.11 per 90 and scoring attempts per 90 with 8.23.

La Roja look to be among the strongest teams in the competition and alongside Ramos, Pique will ensure their defence is as solid as a rock.

The 29-year-old remains vitally important to the Samurai Blue and was the second-top scorer in qualifying with six goals.

5 problems Mourinho must solve this season