Romelu Lukaku and Harry Kane have been the best two No.9s in Russia this summer and their contributions inside the box have been especially impressive given the amount of football they have already played this season.

Among strikers in the Premier League last season, Kane ranked second for minutes with 3,045 with Lukaku third on 2,841; Jamie Vardy led the way, clocking 3,258 minutes – missing just one top-flight game across the campaign.

The stress placed on their bodies was considerable, so to have transferred some of that stellar form into the World Cup is testament to their ability and commitment to their respective countries.

However, while the World Cup only comes around every four years, it’s a situation that cannot be allowed to continue. And while Tottenham have their own issues in how to alleviate Kane’s workload, United appear to be devising a strategy for Lukaku.

At times last season, Lukaku looked to be playing with injury or at least carrying the after-effects of one but such was Jose Mourinho’s lack of faith in Marcus Rashford or Anthony Martial to lead the line, the Belgian had to be there.

Reckon Croatia will beat England on Wednesday? Back it at 13/5 with RedArmyBet

As well as the pressure that puts on Lukaku’s body, it is also tactically counter-productive as, with just one main option in attack, defending teams can plan accordingly.

As a means to remedying this issue, Mourinho has reportedly explored the possibility of signing Mario Mandzukic from Juventus.

The Croatia international could soon well join Gonzalo Higuain on the transfer list in Turin with Cristiano Ronaldo reportedly closing in on a sensational move. With Ronaldo’s arrival, the Juve hierarchy may be forced into selling players to raise finances.

Mandzukic is under contract until 2020 and this summer represents the last opportunity for the club to receive a significant transfer fee for the 32-year-old.

From the Croatian’s own point of view, he’s been a starting player in Europe’s top five league since establishing himself at Wolfsburg in 2010/11 but left Bayern Munich in 2014 when his first-team opportunities declined in the wake of Robert Lewandowski’s arrival. 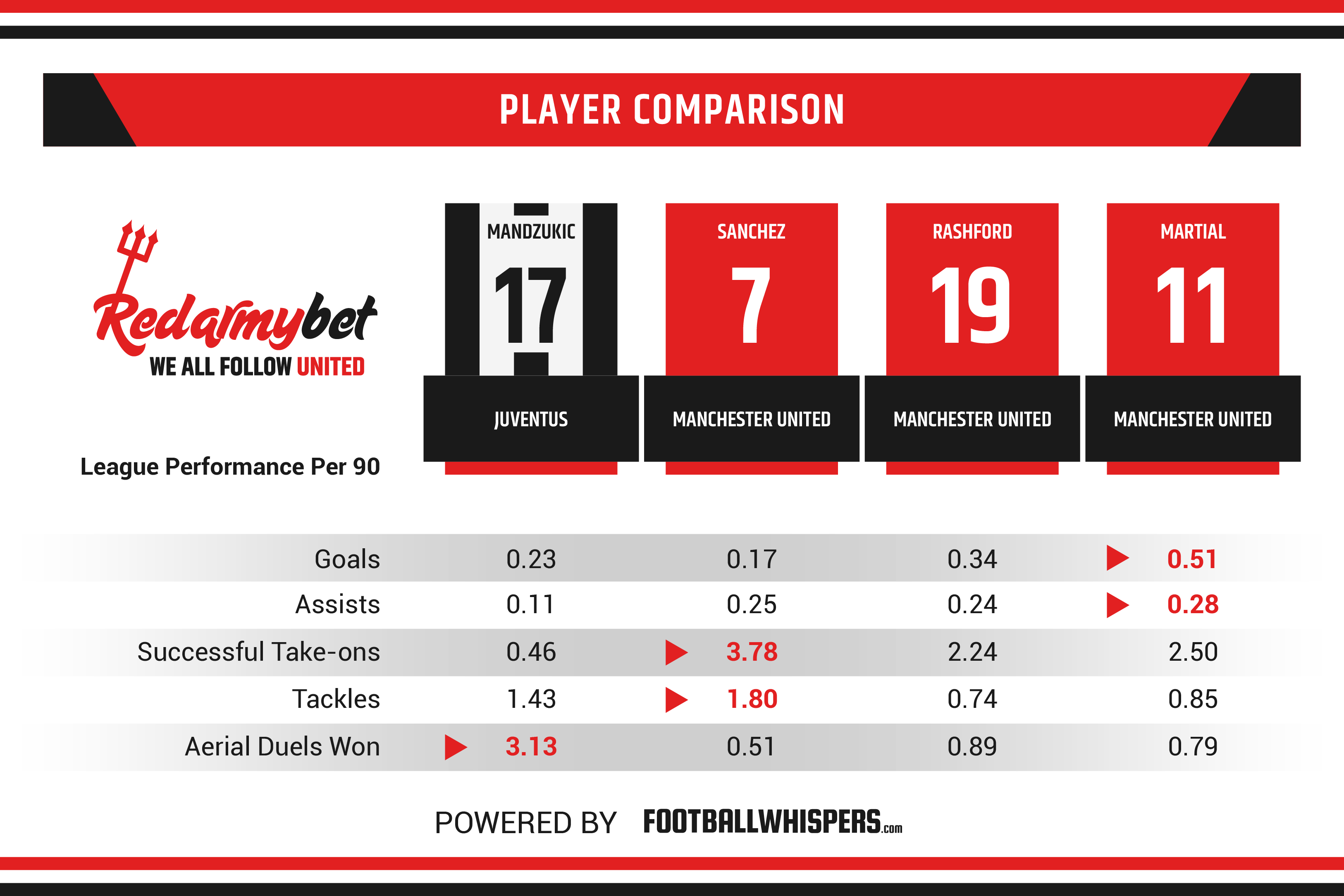 With his career in its final stages, it’s unlikely a player of his stature will be content playing second to Ronaldo.

So, for Juventus it makes sense to sell and for Mandzukic it is a wise time to leave, but is it a good move for Manchester United?

It certainly won’t help quieten those who claim Mourinho is incapable of working with younger players and instead seeks reassurance in fielding experienced veterans. Mandzukic over Rashford or Martial is classic Mourinho, some would argue.

But with Martial potentially on his way out of Old Trafford, perhaps even to Juventus, it could create a spot in the squad for Mandzukic.

Starting his career out wide, as he’s moved around from Wolfsburg to Bayern to Atletico and now Juventus, he’s frequently been stationed on the left, his attitude and work rate allowing him to almost operate as a defensive winger. It’s only really for the national side where he consistently plays as an out-and-out striker.

His defensive qualities will no doubt excite Mourinho while he has nearly a decade of big-game experience in the Bundesliga, La Liga and Serie A coupled with an extensive international career. Playing in the Premier League won’t phase him while he has enough physical qualities in his game to compete amid some more agricultural tactics employed by lower-placed teams.

Mandzukic is a skilful and good finisher who’s also excellent in the air and can play with his back to goal. In Mourinho’s more direct system, he’s an obvious like-for-like in place of Lukuku, more so than Rashford who needs space to run in behind. 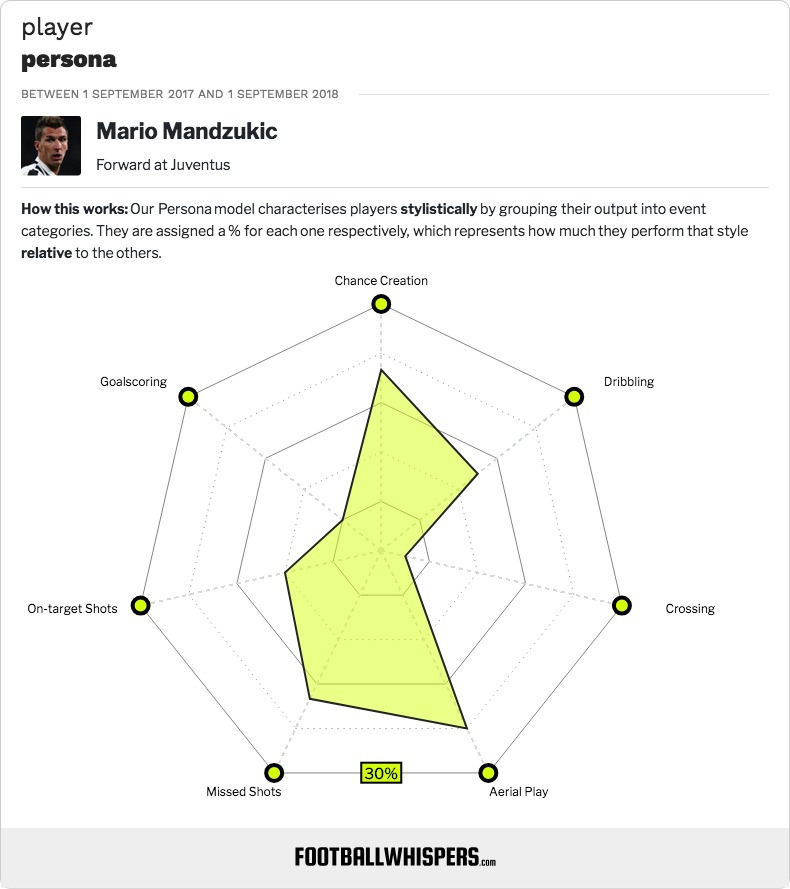 But against all that common sense, the burning question remains, what’s the point?

Manchester City are building a legacy at the Etihad. Pep Guardiola’s contract extension indicates that, unlike at Barcelona and Bayern Munich, he’s in this for the long haul. Mauricio Pochettino and Jurgen Klopp are building exciting teams at Tottenham and Liverpool respectively while Arsenal are set to embark on their post-Wenger chapter under Unai Emery.

In short: the need right now for United is not only success but to build a club worthy of challenging City’s supremacy.

Of course, a lot can change in football in a very short space of time and plans are often torn up, rewritten, scrapped or fail to come to fruition for a variety of reasons, but signing Mandzukic is a short-term solution to what is likely a long-term problem, when there are answers starting Mourinho in the face.

Back Mario Mandzukic to score anytime vs. England on Wednesday at 11/4 with RedArmyBet

Why can’t Rashford be developed into that secondary central striker? Placing that level of responsibility on him beyond just being a jack-of-all-trades forward who fills a gap when required will be the making of him.

Mandzukic’s transfer would still cost around £20m and could occur in a summer when an expensive Martial project is being ditched, despite the Frenchman’s world-class potential.

The 32-year-old would also command a significant wage, money that could be distributed elsewhere.

Given the resources poured into United’s scouting network, it’s difficult to accept that alternatives to Mandzukic have not been touted.

Mandzukic may be a common-sense signing; a quick and easy addition to plug a hole and alleviate the pressure on Lukaku. But to catch City and stop Liverpool and Tottenham potentially accelerating past them, United need more than common sense.

Jose’s not special but he’s still the one.

VIDEO: 6 Reasons Why Solskjaer is the Perfect United Manager