We take a look at five things we learned from United Champions League defeat to PSG.

Manchester United’s glory days finally came to an end last night, as did Solskjaer’s unbeaten streak as the Reds lost 2-0 to visitors Paris Saint-Germain in the first leg of their Champions League round of 16 game.

Although United will now have to brush themselves off and mentally prepared for the likes of Chelsea and Liverpool who are waiting in the wings, last night’s result was disappointing to say the least. We take a look at five things we learned from the performance.

It was a dismal night for all on Tuesday, however United’s striking force in particular struggled against PSG, proving that whilst Ole has numerous good quality players to choose from, not all of them were able to deal with the defensive power of the opposition.

The likes of Marcus Rashford and Alexis Sanchez were barely present in the game and pretty much ineffective for the Reds as PSG defenders ran the show inside their own penalty box.

For Sanchez in particular, it was unfortunate to see another disappointing performance from the 30-year-old. Just when it seems like he is about to begin producing the performances that fans expected when Untied signed the Chilean, he stutters and stops, retreating back to the lacklustre player that frustrates fans week in week out. 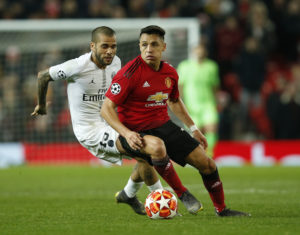 Sanchez failed to make an impact.

Di Maria comes back with vengeance

Di Maria’s time at Old Trafford was a disaster to say the least, with the Argentinian failing to live up to expectation during his brief spell in the north-west of England.

The former Real Madrid player was clearly unhappy at Old Trafford with fans and players alledgedly turning on him, however last night on his return with PSG, Di Maria experienced his greatest night in Manchester by far.

It is understandable why he didn’t receive a warm welcome, Ashley Young’s actions that sent the 30-year-old almost hurtling into the crowd were maybe not as understandable! However it is never nice to see things take an ugly turn with objects being thrown at the player. Hate him or love him, you cannot deny that the PSG player put in an impressive performance for his side.

With the likes of Neymar and Cavani missing from the visiting team, this was a perfect opportunity for Di Maria to make a name for himself, which is exactly what he did.

He was able to demonstrate that there are other quality players in this team rather than the likes of Mbappe, and as much as many will not want to admit it, the away fixture in a few weeks time is a worrying thought for many United fans.

Pogba can’t step up to the plate

Last night was the perfect chance for Pogba to continue his resurrection since the departure of Mourinho. United’s first real test under new management meant that this was the perfect opportunity to put in a performance that would place Pogba back amongst some of the greatest in the game at the moment.

However, the Frenchman produced something that was the complete opposite of what fans have come to expect in recent weeks. The 25-year-old seemed downbeat and frustrated, topping it all off with a second booking in stoppage time that will rule him out of the second leg in Paris.

The incredible stats behind Pogba’s form under Solskjaer

Injuries could not just only affect the Champions League

Whilst the first half of the game was hardly thrilling, the injuries picked up by Anthony Martial and Jesse Lingard were a shame to see. Perhaps if the pair had stayed on the pitch, United could have taken something positive from the game.

Whilst last night this was a blow to the Reds, many will now be interested in whether these injuries are short or long-term.

With what some may call a ‘must-win’ FA Cup game against Chelsea looming on Monday, along with a Premier League clash with Liverpool on the horizon, United need every player fit and ready.

Failure to take anything from these two games could well undo the good work that Solskjear has put in over the last few months, so hopefully all players will be fit and ready to play.

End of the unbeaten streak

Sadly all good things must come to an end, which is exactly what happened as Solskjaer’s unbeaten run came to a halt.

Whilst many felt that Solskjaer had the miders touch after eight weeks of success, the manager was given a harsh reality check last night as the Reds did not only lose but gave away two important away goals.

The Norweigan now has a great task on his hands. Whilst many are already ruling United out of getting a win in Paris, the manager remains optimistic but not naïve, understanding of the scale of the task that lies ahead.

The manager was honest in the fact that United were not used to playing the likes of PSG, and if the Reds have any hope of returning to these levels, perhaps Ole’s honesty paired with his positivity could be an important stepping stone in restoring Manchester United.