Ole Gunnar Solskjaer has made no secret of his desire to land the job full-time in the summer, but while he’d done all he could to lift the mood over his first five games in charge, the encounter against Spurs was the first time he’d faced a proper challenge.

He may have David De Gea to thank for the win after an electric display of footwork from the Spaniard, but the confidence installed in the likes of Paul Pogba and Marcus Rashford has been key to the transformation and he may yet land the job on a full-time basis.

Solskjaer was of course known as the ultimate ‘super-sub’ and Romelu Lukaku may be forced to take a leaf out of the Norwegian’s book.

The Belgian missed the opening to his tenure as he worked his way back from fitness and took a leave of absence on compassionate grounds, but has given the new coach a nice headache with goals from the bench against both Bournemouth and Newcastle.

Lukaku is not as mobile as Rashford and his heavy first touch looks ill-suited to the new tactical blueprint, though Solskjaer has hinted that he sees no problem with the pair featuring together as they did for the last 25 minutes at Newcastle.

The young Englishman has been in superb form of late, but Lukaku is his main opponent for a starting berth away at Arsenal in the FA Cup next weekend and the Belgian has been delivering goals in the short bursts he’s played under new management so far. 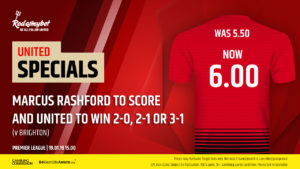 He has three in just 151 minutes of action and although goals against Brighton won’t hamper any accusations that he’s largely a flat-track bully, he’s perhaps more suited to the task at hand.

Six of Rashford’s eight goals this season across all competitions have come away from home as he likes utilizing his pace in behind – space that the Seagulls are unlikely to offer up willingly – and the more physical qualities of Lukaku should come to the fore here.

Indeed, the burly Belgian has netted in both of his last two against Chris Hughton’s men in all competitions, while Rashford is yet to score against the visitors in 230 minutes during his short career to date.