A defeat against PSG is disappointing but progress in Europe should be an aim for next season rather than this term, with a battle for a top-four spot and potential silverware in the FA Cup our core priorities at the moment.

A run of 11 wins from 12 unbeaten matches domestically should worry Liverpool, who haven’t been at their best of late. Indeed, Jurgen Klopp’s outfit are just W3-D3-L2 over their last eight fixtures across all competitions, including three stalemates in their last four (which could easily have been four in five if not for a frantic finale hosting Palace at Anfield). 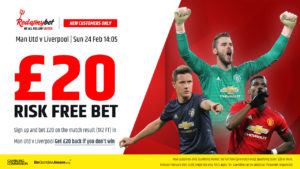 This should be a high-octane encounter as both sides like to press, but while going toe-to-toe with Klopp’s outfit could prove dangerous, it would be worse to go with the negative attitude the team was sent out with under Jose Mourinho.

Juan Mata did a respectable job putting Jorginho under pressure against Chelsea in the FA Cup, and will likely take up an attacking midfield position again with Ole Gunnar Solskjaer seemingly preferring the diamond in the big games, as he also did against Spurs.

That’s especially the case as Jesse Lingard and Anthony Martial could remain out of the picture for a place in the starting line-up. Reports suggest the pair could make the bench, but any contribution they make won’t be from the off.

Solskjaer should stick with Romelu Lukaku over Alexis Sanchez up front here, though he has a decision to make at the back. Victor Lindelof is unquestionably first choice centre-back, but while Chris Smalling formed a solid partnership with the Swede against Chelsea, the pace of Mo Salah and Sadio Mane should cause concern and Eric Bailly may as a consequence be afforded another opportunity.

Liverpool are understandably showing some nerves after such a long wait for the gilded prize of the Premier League title, but recent form suggests this will end all square.

Prior to our last encounter with Klopp’s outfit, which proved the final death knell for Jose Mourinho, we’d drawn four of five head-to-head meetings and frankly we’d be okay with another.

It seems pretty certain that Spurs will fall short in the race, meaning one of City and Liverpool are going to take the crown. As much as we’d prefer it to be someone else other than those two, City have been there and done it and it would be immensely satisfying for Liverpool’s long wait to continue.