Betting preview, tips and enhanced odds for the fixture.

The pressure is temporarily off with this game meaning absolutely nothing to Valencia as they’re already guaranteed to enter the Europa League.

While there’s a remote possibility of us topping the group, in reality we need Juve to slip up against Young Boys, so we can expect plenty of changes from both managers ahead of this fixture – especially with some weary bones and a trip to Anfield looming on the horizon.

Pressure on Pogba only

That will mean a start for Paul Pogba having played just 15 minutes across the last two games as he began both on the bench.

After his last start against Southampton, he can ill afford another lacklustre display with Juan Mata showcasing creative credentials in the French World Cup winner’s absence.

Indeed, Mata got onto the scoresheet versus Fulham and set up Romelu Lukaku to end the Belgian’s drought, while Marcus Rashford did his chances no harm with a goal and two assists in a man of the match performance.

Simply put, Pogba’s technical quality is no longer cutting mustard, and unless he ups his game, will find himself on the bench more often than not with the team prospering without him.

Pogba must put in a good performance against Valencia.

The battering of 10-man Fulham was only the third time across all competitions where we’ve netted three times or more this season, with the other two examples our opening day Champions League victory over Young Boys and the satisfying, last gasp 3-2 win over Rafa Benitez’s Newcastle.

In fact, it was the first time we’d breached the four-goal barrier since a 4-0 victory over Yeovil in the FA Cup back in January, while for the last time we struck four times past anyone decent you have to go back over a whole year.

This will be a different game to the weekend as Valencia are not the same type of opponents as Fulham, with Claudio Ranieri still getting to grips with the shambolic defence he’s inherited, which is by far the worst in the division.

Marcelino has had rather longer to implement his designs on Valencia, though his pragmatic approach has left them a dull outfit to watch for the neutral. 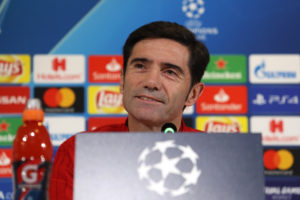 Valencia’s head coach Marcelino will be hoping for a home win.

15 of their last 17 Champions League or La Liga matches have seen fewer than three goals, with nine of these finishing in stalemates, while all five of their defeats this season have either finished 1-0 or 2-0.

Such has been their struggle for goals that they’re the joint-lowest scorers domestically with Huesca, who are down in 20th in La Liga, while the reverse of this fixture finished goalless in a thoroughly boring encounter.

This is easily the kind of game where we might sneak a narrow win to nil via a late Marouane Fellaini header, but against another dour outfit, ‘unders’ has to be the smart way to go.