What a difference a year makes. Last January, Manchester United rolled up to Wembley, were routinely outplayed by Tottenham and sent back to Old Trafford with their tails between their legs, humbled and humiliated.

With a vibrant, slick front four of Harry Kane, Son Heung-min, Dele Alli and Christian Eriksen, Spurs made the Red Devils look like a spent force, running out comfortable 2-0 winners.

On Sunday it was a different story. Having been reinvigorated by the arrival of Ole Gunnar Solskjaer, United were almost unrecognisable to the overwhelmed collection of individuals that conceded just 11 seconds into last year’s encounter at Wembley.

Paul Pogba continued his fine form with a mature display and a spectacular assist for Marcus Rashford, who has cemented his status as the team’s principal matchwinner, Ander Herrera worked his socks off in midfield and David de Gea once again pushed the boundaries of logical goalkeeping with a succession of top saves – aided by expert positioning and reflex – to keep a clean sheet.

And there was redemption, too, for Nemanja Matic, who will have been satisfied by his own contribution after a testing period for the Serbian.

Matic, widely viewed as one of Jose Mourinho’s most trusted on-field lieutenants, struggled in the early part of this season. Now 30, it seemed that after over 3,000 minutes of Premier League action in 2017/18 followed by the World Cup, he was badly fatigued and showing early signs of decline.

United to score in both halves vs Brighton was 1.90, now 2.00* with RedArmyBet

Indeed, there have been examples of this season recently. In the 3-0 defeat to Spurs at Old Trafford in August, the former Chelsea midfielder looked off the pace in his first game of the season and was hauled off after 61 minutes.

That, unfortunately, set the tone for a trying couple of months. Two games later, he was sent off against Watford, with both bookings coming as a result of careless, mistimed tackles.

When United lost to Derby County in the Carabao Cup, Frank Lampard’s youthful, inventive attack exposed Matic’s immobility and positional sense and he won’t ever be willing to rewatch his part in Paulo Dybala’s winner for Juventus at Old Trafford in the Champions League, the Argentine ghosting past him before converting from close range.

However, like many of his teammates, Matic has been lifted in recent weeks. It has not been a drastic turnaround but the feelgood factor that has replaced the gloomy shadow of Mourinho’s final days has not passed him by.

Solskjaer’s continuity in selecting personnel has helped. Under Mourinho, he partnered everyone from Pogba, Herrera, Marouane Fellaini, Fred and Scott McTominay.

The Norwegian, however, has quickly settled on his first-choice line-up, with Matic, Pogba and Herrera very much the preferred trio in the middle. Matic enjoyed one of his most commanding displays in a while in the win over Newcastle and chipped in with a rare goal in the Boxing Day defeat of Huddersfield.

But the hard-fought victory at Wembley will have been particularly sweet for Matic. Last season, he looked distinctly second-best up against the power of Mousa Dembele, the energy of Alli and the craft of Eriksen but, on Sunday, his shift anchoring the midfield should not be overlooked.

The first 45 minutes demonstrated United’s threat on the counter. The second was very much about defending, hanging on, fighting for the points. It often meant getting bodies in the way and Matic was often one of those bodies. 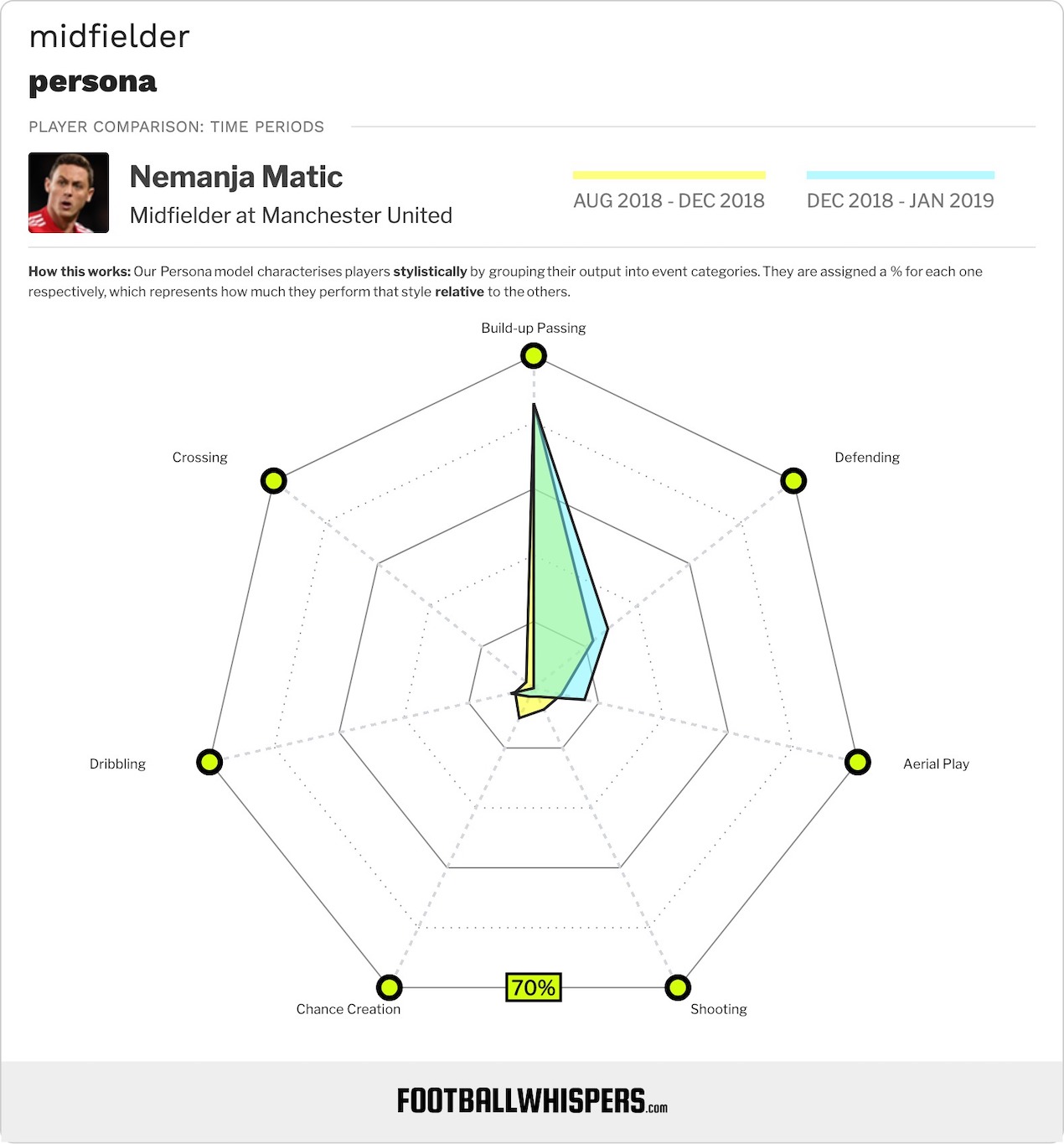 Matic’s discipline in shielding the defence had a positive impact on United’s going forward too. Sitting deep, he allowed Pogba to find space slightly further up the pitch. The Frenchman was therefore in the perfect position when Jesse Lingard intercepted Kieran Trippier’s pass. Pogba, having already spotted Rashford on the move, took one touch and found the 21-year-old with an arrowed, heat-seeker of a pass.

Matic’s performance wasn’t perfect. There were instances in which Kane or Son used their agility to spin away from him. This remains his main weakness and, for many, the reason he cannot be a long-term starter in United’s starting XI. However, having received his fair share of criticism before Mourinho’s departure, his response in the formative stages of this new chapter under Solskjaer has been admirable.

He may not be the showiest or most exciting player in club’s ranks. However, when it comes to a gritty, tense slobberknocker away to a top-six rival like on Sunday, his experience, discipline and presence in the middle are as valuable as they ever were.