A couple of newspaper stories this week have suggested that it has suddenly dawned on Premier League clubs that deciding to close the summer transfer window on 9th August rather than the 31st, as every other major European league does, was a terrible idea.

Whether or not the original premise was correct, to decide to implement the change for the first time in a World Cup summer always seemed like folly. The hope that other leagues might follow suit seems to, for now, have been a forlorn one. Very little transfer business has been carried out during the tournament and English teams are now left with a month to conclude the vast majority of their signings. What’s more, those who need to sell to fund incomings are left in a bind, because European clubs looking to take players off their hands have no imperative to do so in the next few weeks, safe in the knowledge they have until the end of August to finalise their squads.

Fortunately United were one of the few English clubs to get decent business done before the World Cup. It feels like months ago now, prior to the planet being enveloped and enthused by this summer’s glorious tournament in Russia, but the purchases of Fred and Diogo Dalot appeared to be a smart start to the window. Whilst both are, to a degree, unknown quantities, Mourinho has his midfield addition and a right back with promise to challenge Antonio Valencia. It eased early nerves in a summer that, for the fifth consecutive year, feels absolutely pivotal to United’s medium-term future. After two years at the club and with hundreds of millions of Pounds spent Jose knows that there can be no more excuses for conservative, incoherent football and inconsistent results.

Harry Kane is 19/1 to join United this summer with RedArmyBet.com

As the World Cup draws to a close focus is moving back to United and it is slowly dawning that after that fast start there is still an enormous amount to do this window, even if a second midfield purchase is not required (but, for many, still desired) following Marouane Fellaini’s last-gasp renewal. The priority from here must be to sign a first-choice left back who offers quality going forward as well as defensive surety. Mourinho’s tactical system, with wide players who cut inside, relies on width from the full back areas. It was inadequate last season and whilst Antonio Valencia retaining the right back spot does not bode well, a high class left back can make a huge difference in that regard. Depending upon who you believe, it seems that Juventus’ Alex Sandro may be United’s first choice, but he will cost a significant amount in a summer in which, once again, it appears that the powers that be may be unwilling to fully utilise the club’s vast financial resources. 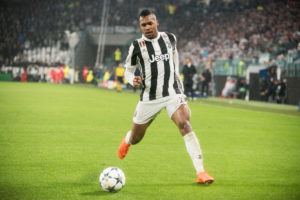 Alex Sandro could be an option for United.

The defeat in the FA Cup final to Chelsea was a chastening one, not least because United fielded a back four entirely composed of Fergie signings, none of whom many Reds consider to be good enough at the highest level. Jose has already acquired two centre-backs but appears reticent to play them together or, as was the case towards the end of last season, at all. Victor Lindelof has had a strong World Cup, but if his manager does not rate him or considers him to still be too raw then a new centre back must also be on the summer shopping list. Mourinho appears to want Toby Aldereiweld, a shrewd move given the Belgian’s experience and the relative youth of both Lindelof and Bailly. Spurs, shock horror, appear to be requesting a vast fee for the 29 year old and it is unknown whether the club are willing to move for secondary targets. If Smalling and Jones remain first-choice then they really should be.

Danny Rose is 31/20 to join United this summer with RedArmyBet.com

In an ideal world United would make five signings in total this summer. Arguably more important than any other would be the acquisition of a classic pacy right winger, capable of committing defenders and providing quality supply from wide for Romelu Lukaku. This would, to a degree, minimise the impact of Antonio Valencia’s shortcomings. Reports have suggested that Mourinho would like to sign Willian from Chelsea, a slightly depressing thought given the likely fee, the Brazilian’s limited talents and the fact that more than anything else the manager covets him for his diligent defending and receptivity to instruction. The club is awash with mediocre players who follow orders and it seems that it is unlikely that United can make much progress by adding more to the mix. Why not take a chance on a prodigious talent with world class potential like Bayer Leverkusen’s Leon Bailey? The question may be whether such a player would want to take a chance on Mourinho right now.

One wonders if the club’s current intransigence in the market is because they are waiting to find out if Gareth Bale will become available this summer.

It’s a risky tactic, although the Welshman remains a World Class footballer. Valuable time in a short window could be lost and whilst other clubs appear to be picking up the pace once more, United are either doing their business commendably quietly or are losing precious time. The cost of such a deal is also a concern. If Bale were to join would Ed Woodward and the ginger gnomes still be willing to fund vital defensive purchases? And what of the lanky forward that Jose is said to want as a backup to Romelu Lukaku?

United have a month to come out on top in a high stakes game of poker that will likely make or break Jose Mourinho’s tenure at Old Trafford. If reports are correct then it has suddenly dawned on Premier League clubs that a shortened window was an act of idiocy, as Chief Executives try to accelerate purchases from and sales to European clubs with no similar imperative to do so. This could be a tough month for United and Woodward, therefore, and with at least three players still required we are already a couple of weeks away from squeaky bum time.

Check out all the latest transfer odds with RedArmyBet.com

Lukaku and Why England Should Be Afraid, Be Very Afraid