RedArmyBet take a look at the main contenders for the position.

As things seem to be going from bad to worse over at Old Trafford, the hunt for a Director of Football will certainly be high on the club’s priority list.

After a disastrous transfer window, Manchester United are in desperate need of a new system. Since Ed Woodward’s appointment 10 transfer windows have passed and there is a clear lack of continuity and organisation with each one. The answer? A Director of Football, who would bring in a more efficient transfer policy and a clear message within the club’s ethos.

Whilst Sir Alex Ferguson got the job done when it came to transfers, his approach is now outdated and no longer seems to be working for the club.

Since Fergie’s departure the Reds have been spending millions to get back on top and are still struggling. In order to modernise the club, a Director of Football would be ideal for United in order to oversee long-term strategies and would act as a buffer between manager and executive.

So, who is in the running for the job? Here at RedArmyBet we take a look at the top contenders for one of the most sought-after jobs in football.

The FA’s technical director gained more and more attention after England’s successful World Cup campaign. Ashworth was appointed as the FA’s director of elite development back in 2012 and has built a great reputation for himself.

He is behind the “England DNA” plan, which helps to create winning senior teams in the men’s and women’s game, and this is exactly what he has achieved. Thanks to numerous successes in different age group tournaments, Ashworth has transformed England’s youth teams into European and World champions, some of whom have then gone on to shine in Russia this summer in Gareth Southgate’s squad. The former Norwich player is certainly on United’s radar and would be a good candidate for the job.

Roma’s Director of Football would be great asset to United and has numerous years of experience. He held the position at Sevilla, where he stayed for 16-years and revelled in the club’s successes which included numerous UEFA Cups and two Copa del Reys.

He is known for discovering Sergio Ramos and since his move to Roma in 2017, the former goalkeeper has recruited 14 players and counting for the Italian team. He has already proved to United that he is a worthy director, after Jose Mourinho’s squad suffered Champions League defeat at the hands of a Sevilla squad that included many of Monchi’s recruits.

United are at 32/1 to win the Premier League*

The much-loved United legend has been rumoured to be in with a chance of returning to the Theatre of Dreams. The former goalkeeper has the experience and had a similar role at Ajax as a marketing director since 2012, and he was promoted to the role of CEO in 2016.

Van der Sar would be a great option due to his links to Old Trafford and the work he has already done in his post-playing career. He recently shared Mourinho’s concerns about United’s squad for this season after a disappointing transfer window, stating that United need more signings. Could he be the answer to United’s problems? 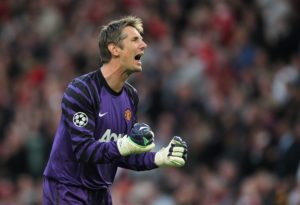 The Dutch football coach arrived at Old Trafford in 2014 as Louis van Gaal’s opposition scout, and is the only member of his backroom staff that has remained, a decision which paid off as he was appointed Chief Scout in 2016.

With great experience at Bayern Munich and with the Netherlands national team, Bout also had the advantage of already being a part of the Untied system, and hiring from within the club could prove to be beneficial rather than recruiting a well-known name from another team, as Bout will already be aware of what United need and their ethos.

For all of the latest United specials click here

RB Leipzig’s head of recruitment would be another great fit for United. A Mancunian by birth, he is known for setting up recruitment systems at Southampton and Tottenham Hotspur.

After spending time at Southampton and helping the team through promotion, Mitchell moved on to Spurs and brought in the likes of Dele Alli, Toby Alderweireld and Kieran Trippier. With great experience in England and now Germany paired with a great eye for talent, Mitchell could be just what United need.

It will be hard to pull the Juventus Sporting Director from his role, especially after recently overseeing the impressive transfer of Cristiano Ronaldo from Real Madrid.

With over 10 years of experience it is clear as to why United are considering Paratici. After retiring from professional football, Paratici became Head of Scouting for Sampdoria back in 2004, becoming the club’s Director General, Giuseppe Marotta’s right-hand man. The pair then moved to Juventus, and although United will not want to simply hire the highest-profile candidates for the sake of it, with his experience Paratici would make a great director for the Reds.

Could Less Actually Be More For Jose In The Transfer Market?