Who should be Manchester United’s Player of the Year?

Who deserves the Sir Matt Busby Player of the Year award?

The PFA gongs have all been given out, and it’s the kind of time in the year when people start to ask and vote on who each club will name as their player of the year. Manchester United, though, are in an odd position where there is no obvious candidate.

Although the club haven’t necessarily had a bad season — top four is still possible — most of the usual suspects for the award have had up and down campaigns.

David de Gea has had a decent season, but has made some high-profile mistakes and it would feel odd for him to get it compared to the previous years where he was awarded the Sir Matt Busby Player of the Year trophy.

Paul Pogba and Marcus Rashford are the next two obvious candidates — fan favourites who’ve also had very good spells. Their quality as players might work against them, though. Although both have had some great periods of form — mainly just after Ole Gunnar Solskjaer replaced Jose Mourinho — there have been stretches where they’ve struggled.

Have either of the pair reached their full potential, and for a prolonged period of time, this season? Probably not.

Club player of the year awards tend to go to the outstanding stars of the team, but there’s another ‘type’ of way that they’re given out. There’s a whole tradition of these nominations being given to surprise breakout stars, or players who’ve worked hard to overcome an injury.

They may not be the star of the team, but the fact that they’re playing in the first team regularly is an achievement worth noting in itself. On this front, United have two players who it would be nice to see being given the award.

One is Luke Shaw. The left-back struggled for a long time after his leg-break in 2015, and Mourinho’s apparent one-way feud with him was one of the reasons fans grew unhappy with the Portuguese manager.

Whether Mourinho’s public criticism helped or hindered Shaw’s return to regular first-team football, the fact is that the 23-year-old is now United’s first choice left-back. He’s played more league minutes in 2018/19 than he did in the three previous seasons combined. 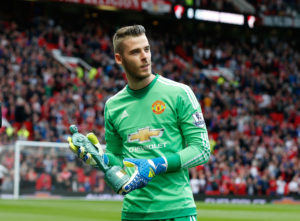 Although Shaw, like de Gea, has had a couple of wobbles this season, they haven’t felt as major as seeing the once ever-reliable goalkeeper making blunders. It would be nice to recognise his achievement in getting back into the starting XI when, for quite a long time, it looked like he might never manage that.

A similar thing could be said for Victor Lindelof. Centre-back has been, and still is, one of the problem positions at United, and the Swede’s debut season at United just felt like a continuation of that.

It seemed like the youngster never got over a poor pre-season back in the summer of 2017. After a year at Old Trafford, Lindelof looks to have settled, and he and Chris Smalling have struck up a decent partnership together.

While the pair don’t necessarily look like a long-term solution, United fans can at least be confident that Lindelof is a reliable defender. That’s something that, either through form or injury, hasn’t been common amongst the club’s defenders in the past few years.

It’s not usual for a defensive player to receive the prestigious award, but this season it would be fitting for one of Shaw or Lindelof to get it.

If anything, 2018/19 has been about a team, and perhaps a club as a whole, re-finding itself. How better to encapsulate this than to give the player of the year award to someone, like Luke Shaw, whose season has been defined by that himself.

No Romantic Return For Ronaldo – Now We Can All Move On