Manchester United have needed an excellent, consistent centre-back almost since the day that Rio Ferdinand and Nemanja Vidic left the club in 2014.

After an empty defensive transfer window in the summer, it feels more and more like the situation is coming to a head.

Our friends at Football Whispers are here to explain why, and to look at who should make their way out of Old Trafford and, perhaps more importantly, who should replace them.

It sounds wrong, but for several years Manchester United’s problem with centre-backs has been that all of the ones that they had were ‘good enough’. Not stellar, but not awful.

To fix the centre-back issue, the club would have needed to bring in a guaranteed star or a potential future star. Anyone who might turn out to be neither of those things wasn’t really worth buying.

This is why Victor Lindelof, although not the best pure defender in the world, was worth a risk – joining United in his early 20s, he’s been able to grow into the role and is now one of Jose Mourinho’s first-choice centre-backs.

With him and Bailly – who, while neither a guaranteed nor potential star, is better than other options and is more adaptable – United finally have a clear path for success. Sell, or otherwise jettison, Marcos Rojo and Phil Jones; buy a single replacement.

So, with Bailly, Lindelof, and Smalling as United’s existing options – who would be a good player to bring in?

Using Football Whispers’ persona radars, which look at a team or person’s playing style, we can see the roles that the trio have been playing this season.

While largely similar, thanks to playing on the same team, Lindelof (blue) has played more of a passing role than the others; Bailly (yellow) blocks more than the others; while Smalling (green) has been a more active defender. 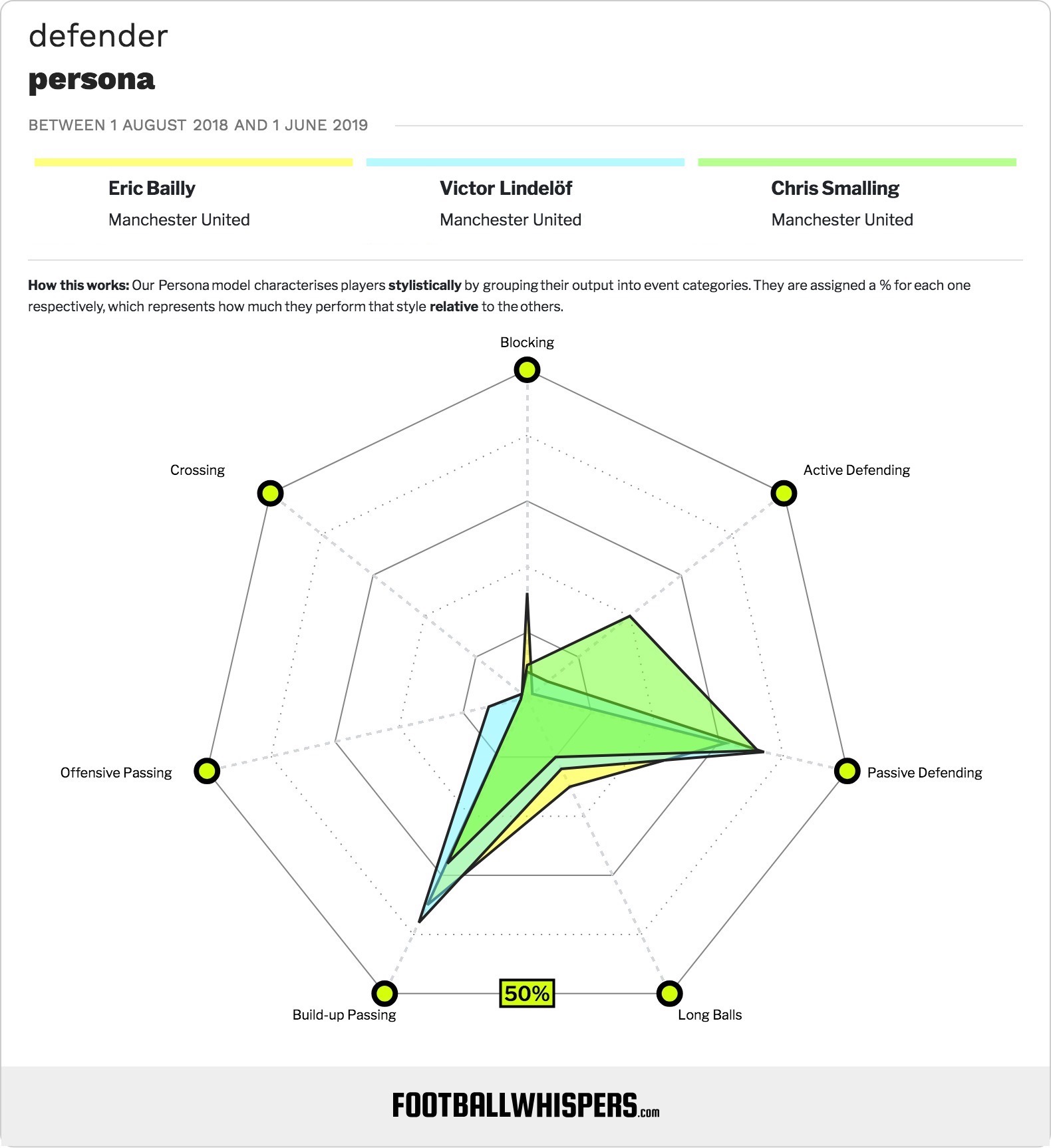 It’s a sign of how much Smalling’s come on under Mourinho that he’s doing the active defending role, one that he isn’t best-suited to. His passing is also a weak spot, which is why he’s partnered with Victor Lindelof. Lindelof, though, could use a partner who is a little more proactive in their defending.

At just 23, he has plenty of time to mature as a player and has close to 100 Premier League appearances under his belt already – despite spending several years as one of Chelsea’s gametime-deprived youngsters.

His game is also very similar to Smalling’s from this season, and is capable of playing a more proactive role than he currently has at Bournemouth, who are arguably hiding some of his talents. 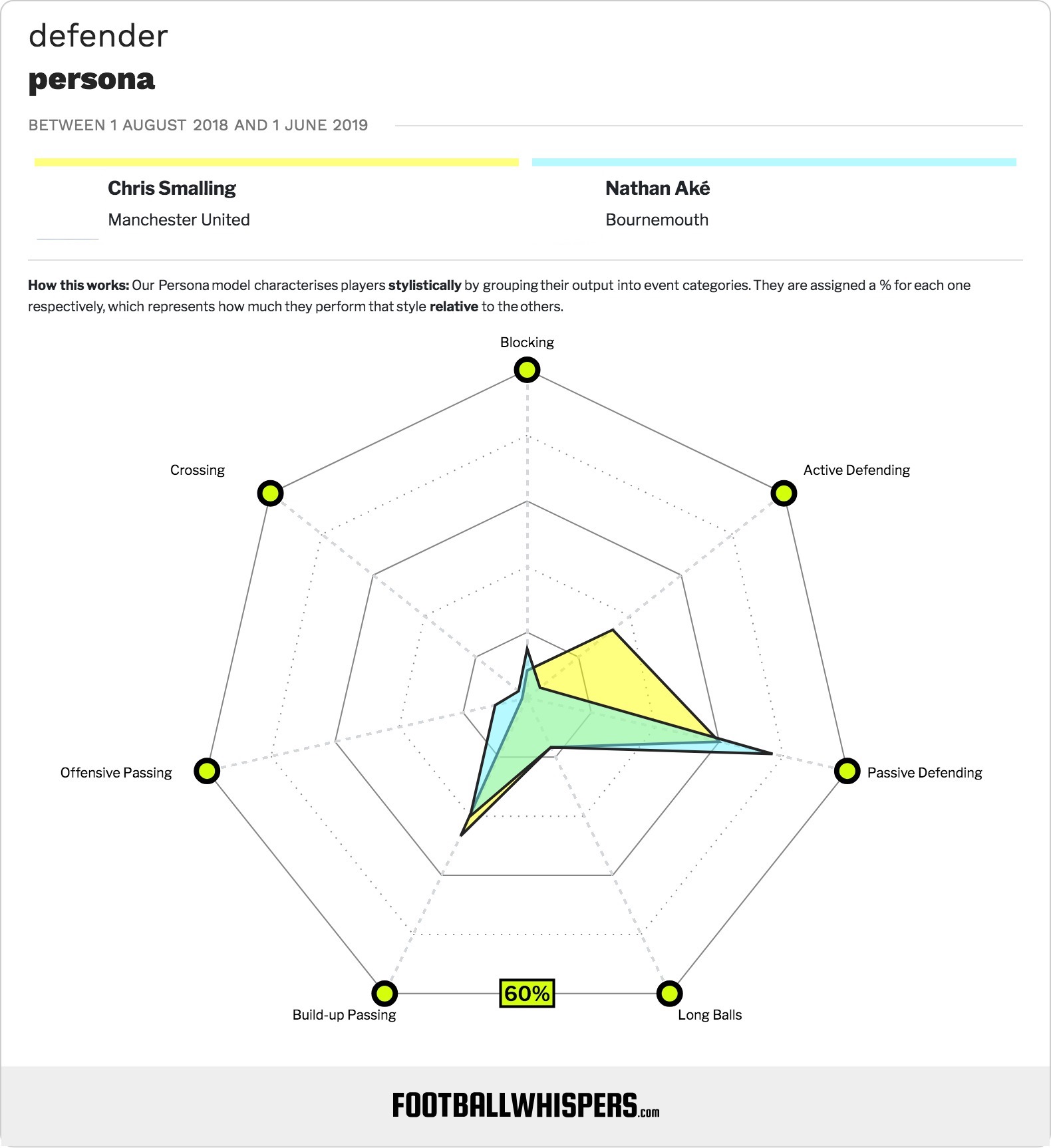 Not only does Ake have a defending style that suits the holes in United’s main centre-back trio, but he’s also a sound presence on the ball. He’d be able to partner any of Smalling, Lindelof or Bailly and complement them superbly.

There’s one final factor in the young Dutchman’s favour that has two benefits for United, although one of them is for the fans more than the team.

The first is that, as a former Chelsea player, he’s grown up in a big-club environment. He’ll know what’s expected of him; he’ll have seen the pressure that comes with playing for one of Europe’s biggest clubs.

But the second is that turning a former Chelsea youngster – yet another who the club have brought in and then sold without giving them a proper chance – would be a great chance to get one over on a bitter rival. Imagine, Old Trafford bringing through more Chelsea youth products than Stamford Bridge.

For footballing reasons, and for fan oneupmanship, Nathan Ake is a perfect choice for United.