It's not his fault managers and pundits are blinded by the height.

Marouane Fellaini of Belgium during the International friendly match between Belgium and The Netherlands at the King Baudouin Stadium on October 16, 2018 in Brussels, Belgium

Groot. Footballers’ nicknames have rarely been so affectionate yet demeaning at the same time.

It can be used by United fans for Marouane Fellaini as both a term of endearment and an insult, and captures how he’s seen as a player.

Today is the Belgian’s birthday though, so what better time for our friends at Football Whispers to explain how his qualities are far greater than just his physicality.

There’s an argument that, if Fellaini was two inches shorter and marginally stockier, he’d be appreciated far more than he is currently. In a similar way to Peter Crouch — the way he looks, the way that he’s so blatantly tall — it’s hard to shake the scale of him from your mind.

Fellaini isn’t just about height. His pass completion rate is 84.5 per cent — below Nemanja Matic and Fred, but above Paul Pogba and Ander Herrera. The difficulty of pass that each is attempting will affect these, but he’s not noticeably worse with his feet than Jose Mourinho’s other central midfielders.

The real problem with being tall

Fellaini isn’t to blame for the way that he’s used by his managers, which — under Jose Mourinho in particular — has often been unimaginative.

The Belgian’s height has a tendency to blind managers to other ways that he can be used. Fans might groan when they see him ready to come on in the last twenty minutes of a match, but that’s more because of the inevitable change in style of play than because of any intrinsic value that Fellaini has.

Successive United managers have been unable to resist the temptation to throw on the 30-year-old and tell the rest of the team to launch long balls to him — and that’s on the manager, not the midfielder. 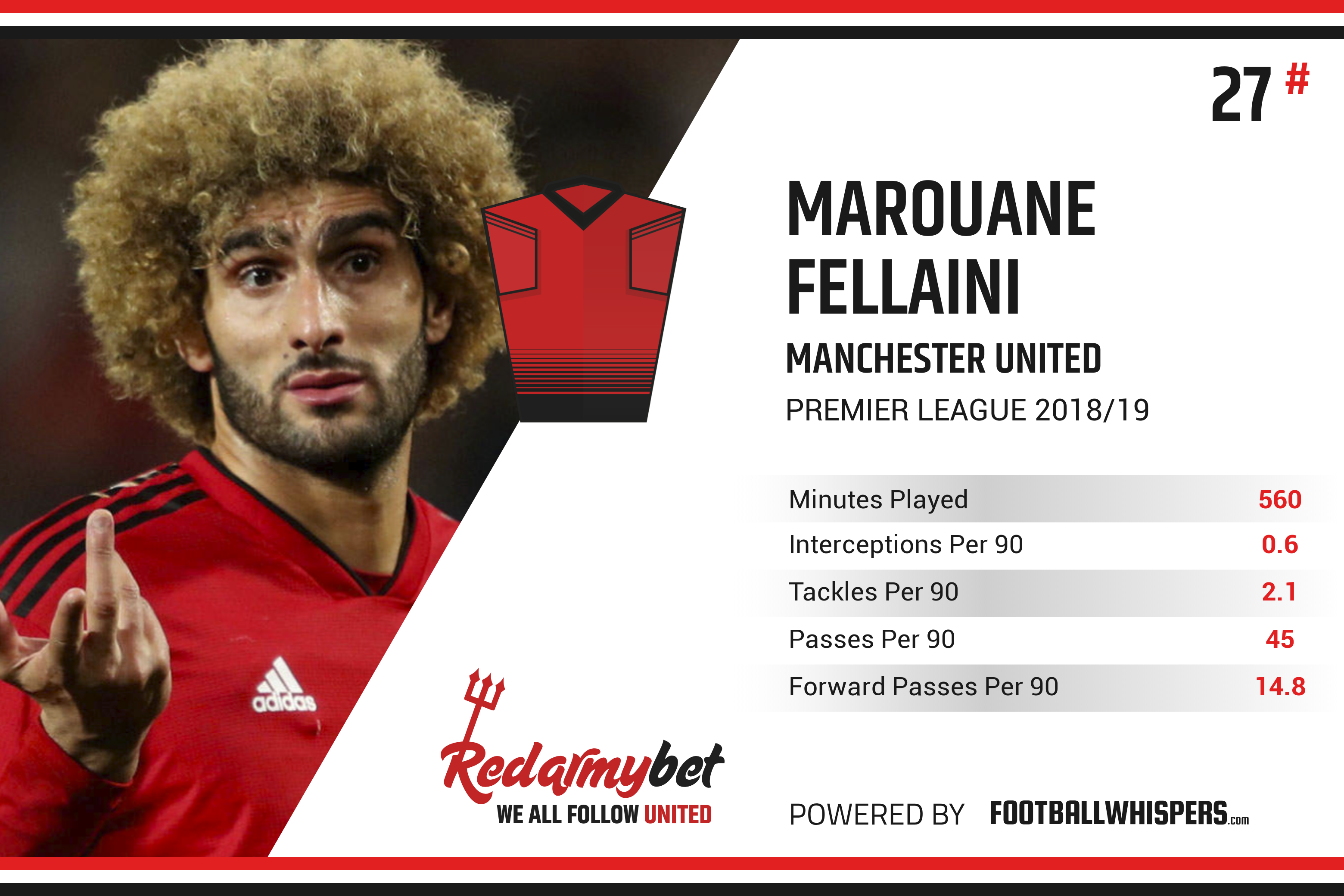 Fellaini is someone who will do what the manager wants, putting his ego to one side in order to put the team first. “If the manager puts me on the bench, and says play 30 minutes, I will do it,” he has said. “I fight to play every game, but I work for the manager.”

And the Belgian is not lacking in self-confidence. Asked in an interview with a Belgian publication earlier this year whether he would like to be captain of his national team, he said:
“If I’d wanted the armband, I think that I would be captain. I know that the players respect me, I get on with everyone, I’ve been in the squad for a while.”

In the same interview he was asked about how certain United fans felt about him, and whether the negativity affected him.

“In the end, I know what the fans know as well,” he said, “I’ve had an important role in all the trophies that the club has won over the past few years.”

There’s a sense that he is not entirely happy with how he is seen, though. Accusations of being limited technically or overly aggressive have been levelled at him regularly, and he’s occasionally spoken out about them.

“I don’t want to elbow someone, I just defend myself,” he said in 2016 after an incident where he was accused of elbowing Emre Can in the Europa League. “I am physical. I like to win my challenge. That’s English football as well, but I am not a dirty player.

That’s backed up by some stats as well. He’s only averaged 1.3 fouls per 90 minutes in the league so far this season, far fewer than fellow midfielders Pogba and Fred, while he also successfully makes two tackles per 90.

It’s not that physicality isn’t a large part of Fellaini’s game, it’s just that people tend not to see past it and appreciate him for his other qualities: his technical ability, his positional sense, his defensive skills.

Is Aaron Wan-Bissaka the perfect signing for Manchester United?

“And Solskjaer has won it!” How Manchester United completed the ultimate treble in 1999