Why old-timer Young should be England’s No.3

The FA Cup final did not make good viewing for many – particularly neutrals – but one man who might have raised an eyebrow with intrigue was England boss Gareth Southgate.

That is because of the performance of Manchester United left-back Ashley Young. The 32 year-old was one of the few United players to leave Wembley with any credit following the 1-0 defeat to Chelsea and his display will have given Southgate food for
thought.

Young, who is ironically the oldest member of the travelling Three Lions party for the World Cup in Russia, is expected to be behind Danny Rose in the pecking order for England at left-back this summer.

But should he, in fact, move ahead of the Tottenham Hotspur man to start for England next month? Our friends at Football Whispers examine both players’ cases.

The case for Danny Rose

It’s been a strange season and a half for Rose who has seen his stock plummet from being considered one of the Premier League’s best in his position.

It was at Sunderland’s Stadium of Light that things began to go wrong on January 31, 2017. Rose suffered knee ligament damage in that game and, although he was expected to return before the season was out, he did not kick a ball again in anger.

In May Tottenham confirmed the full-back would undergo exploratory surgery on his left knee following a lengthy lay-off.

Rose’s relationship with the club then started to deteriorate when the 27-year-old stuck the boot in on his employers through the press. The complaints, which ranged from big-name players not being paid enough to the calibre of new signings, were topped off by Rose revealing he would return north one day.

Feeling patriotic? Back England to win the 2018 World Cup at 16/1 with FansBet

That sparked rumours the Doncaster-born defender would be a Manchester United transfer target. But his form for Mauricio Pochettino’s side has made that simply inconceivable.

Clearly infuriated by a combination of the defender’s insubordination, lack of fitness and form, Pochettino made Ben Davies his first-choice left-back. Rose was handed just nine Premier League starts this season. The knock-on effect of that has been the player failing to build any kind of form or momentum. 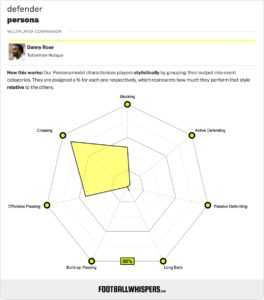 Given all that, it’s a surprise Rose made the 23, let alone that he is expected to start.

The case for Ashley Young

An occasional full-back last term, it looked as though Young’s Old Trafford was career was coming to an end. The former Watford winger was afforded just eight Premier League starts with the bulk of his minutes coming in the cups and, mostly, on United’s run to the Europa League final.

However, this term he has been reborn at left-back with Mourinho preferring him to Luke Shaw. Speaking to Manchester United’s website, the Portuguese confirmed Young would remain an integral part of his side next term.

“When I arrived, he was playing a few matches per season,” Mourinho said. “For the last couple of seasons, lots of injuries, lots of doubts, lots of question marks about his future at the highest level.

“I think he’s better now than he was two years ago. That’s the way I see things and, next year again, he will be an important member of our squad. If he’s now on 200, I hope, next season, he goes into the 250s.”

And with good reason. Like a fine wine, Young is getting better with age and his stats for this season better Rose’s in a number of important metrics. 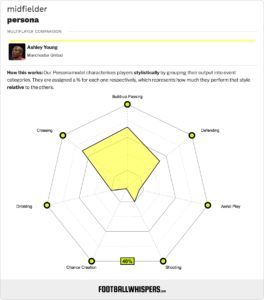 That might be expected given Young is, nominally at least, a winger. So what is even more impressive is the defensive numbers he’s putting up. With 1.95 tackles and 2.09 interceptions per 90 he is outperforming Rose (1.68 and 1.01) in both metrics.

There are two factors which may count against Young, though. Firstly, Southgate has tended to favour players involved in the England setup over those who are international rookies. Young only ended a four-year exile in November and got ten minutes in the second of two friendlies.

The other thing which could end up counting against him is his versatility. While it undoubtedly proved handy in securing his place in the 23, there is a case to suggest it might not help him secure a starting berth even if, statistically, he deserves one.