Daniel Cox takes a look at why Pogba must now stand up and be counted.

If a United fan isn’t talking about Jose Mourinho then they are almost definitely talking about their midfield magician, but not often for all the right reasons.

Let’s take you back to August 2016 when the Frenchman rejoined his boyhood club for a world record fee of £89.3 million at the time.

Many can say the midfielder has lived up to expectations since rejoining the Reds. With a League Cup, Europa League and Community Shield medals all won in his first season at Old Trafford, not to mention the revenue made from the players return.

But on the other hand, many United fans will not really believe the Frenchman has really lived up to expectations in his second spell at the Theatre of Dreams. Pair this with several controversial situations and a number of transfer links the midfielders return has not necessarily been the comeback that fans imagined.

When you compare Pogba’s performance in the World Cup final this summer, to a number of performances at United then you are watching a totally different player.

There is no doubting the ability and further potential of one of the best midfielders in the game, but to be likened to some of the greats that have graced Old Trafford then you need to perform every game, every season and see yourself stand out.

Take club legend Paul Scholes for example, Pogba’s agent Mino Raiola made a dig at the former midfielder after Scholes had criticised United after the 2-1 loss to Brighton claiming there ‘were no leaders’.

Raiola responded to the claim with a series of tweets, with one saying: “Some people need to talk for fear of being forgotten. Paul Scholes wouldn’t recognise a leader if he was in front of Sir Winston Churchill.”

The backlash Raiola received from these tweets was from United fans defending their club legend over their club record signing, which once again shows the legacy Scholes left embedded into the Red Devils fans hearts.

Pogba needs to try and replicate this, play his game, forget the media and look to drive this United team forward on the pitch while it seems to be in turmoil off it. 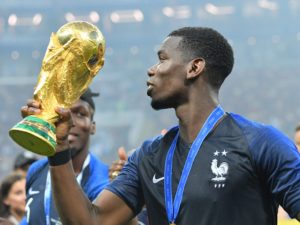 Pogba, at 25-years-old, still has a lot of time to turn it round and win over the United fans which have question marks over him. But he will not be able to do that with one stand out performance in three games so far this season in United’s opening game win against Leicester at Old Trafford.

In the other two matches, against Brighton and most recently Spurs, the Frenchman has been a mere passenger who has gone missing when the team looks for him the most.

Against Spurs, Pogba was no where to be seen when Harry Kane and Lucas Moura wiped further misery onto Mourinho completing a second half route and ensuring all three points returned to London with them.

Pogba failed to make an impact against Spurs.

It wasn’t as though Pogba wasn’t trying to make things happen, a fairly positive first half arguably meant United should have been in the lead come half time, but you could still see the frustrations of Pogba who would receive the ball, and not see an option in site, sometimes not even backwards which is leaving the midfielder in a blind alley with no way out, which only looks bad on him.

Whichever way you look at it Pogba is a great professional who would be much more useful in a United shirt than on a plane to Barcelona.

Maybe we need to give the Frenchman time and give Fred the chance to settle in behind him, meaning that Pogba can have that free role to roam and create problems for the opposition.

Whatever is happening behind closed doors at United will hopefully be over soon so that we can all focus on the football once again, and Pogba can guide United to yet another title and put his name back in the lights.

United vs England: Why Can’t We Have Both?