Does interest in Willian signal end of youthful energy in the side?

In need of some extra attacking talent, Jose Mourinho seems set on bringing another of his former players, this time Willian, to Manchester United.

With Anthony Martial already unhappy, this interest in another attacking midfielder may have been part of what led the agent of the Juventus transfer target to declare on French radio that the player wanted to leave.

Our friends at Football Whispers have looked at whether signing the Brazilian would be a good move for United.

Although Willian is a good player, it’s hard to feel anything other than underwhelmed at reports of him being a Manchester United transfer target.

United’s interest in the Brazilian will, and should, be seen within the context of where it leaves Marcus Rashford and Anthony Martial.

After both had incredible starts to their careers at Old Trafford, they’ve had their roles slowly dialled down, particularly with the introduction of Alexis Sanchez in January.

Think Willian will joined United? He’s priced at 13/10 to move to Old Trafford with RedArmyBet

The numbers on this are stark – Sanchez played more during his half-season at United (1,046 Premier League minutes) than Rashford and Martial put together (498 and 495).

It’s not as if the two youngsters were bit-part players before that point – from the start of the season until Sanchez moved, the three players had 1,507, 1,309, and 1,086 league minutes under their belts.

The four are all subtly different types of players, but there is one thing Willian and Sanchez beat their younger counterparts on, and that’s defensive work-rate.

Away from the defensive side, Martial and Rashford are exciting to watch – partly by virtue of their youth – in a way that Willian and Sanchez don’t quite match.

Martial’s close control, particularly when he gets to the opposition box, is stunning, and it’s no wonder that he averages 7.5 touches there per game versus Willian’s 4.9. 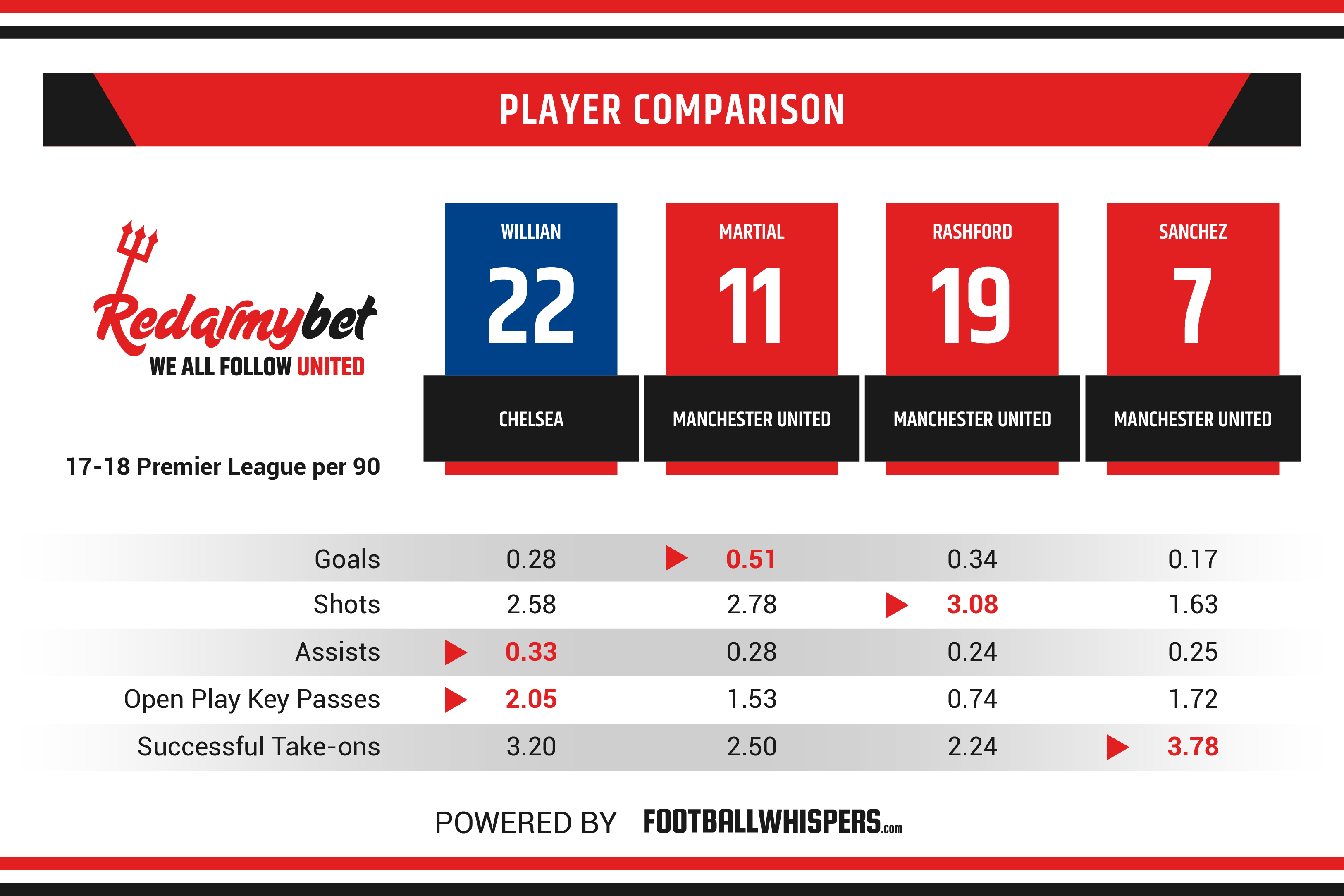 The perils of age

Another big problem with Mourinho bringing Willian to United wouldn’t just be the lack of imagination in the signing, but what it would do to the age of the squad.

Ages seriously matter in the long-term, and many a dynasty has fallen because the core of players have peaked. it’s why Sir Alex Ferguson’s continual renewal of his squads was so key to his success – not only did it keep players on their toes, but it also meant that any whose age was starting to impact their performance could be moved on, with a replacement already bedded in.

Were United to buy Willian, it would mean that Mourinho’s last two purchases would be him and Sanchez – or, at the time of purchase, two 29-year-olds.

This ESPN article from last year suggests wide forwards peak at around 25 and that after 28, the average is for a fairly quick decline.

That’s not to say that Willian and Sanchez are definitely going to follow this pattern, but that when you’re buying someone in their late 20s, you’re only getting what you were buying for a short period of time. And is a declining Willian or Sanchez really better than a developing Martial or Rashford? 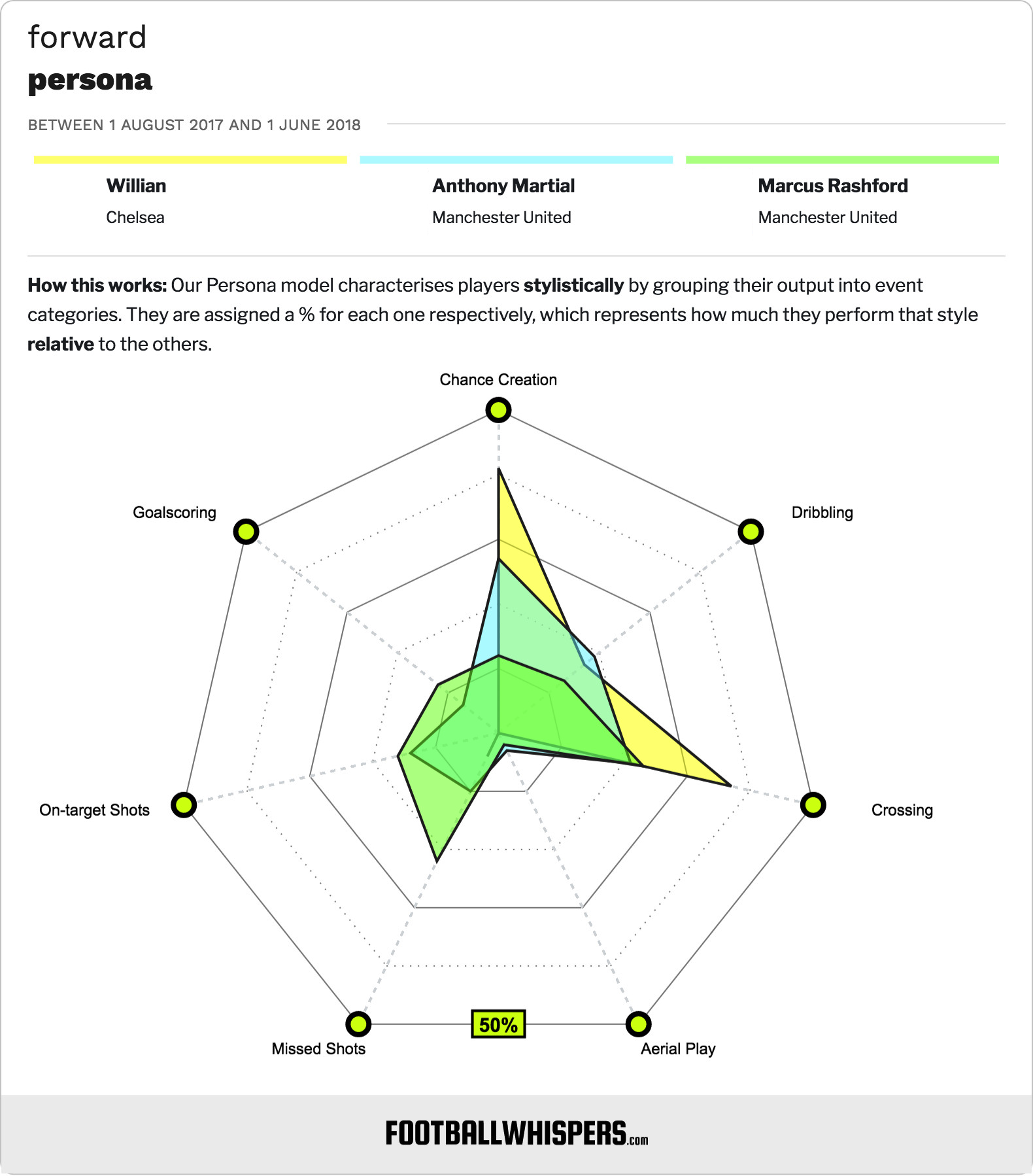 Having spent most of the past few season playing on the right wing, Willian is unlikely to be direct competition for Martial and Rashford. He would certainly offer more pace and dynamism than Juan Mata, himself 30, who has occupied the right-side of United’s attacking midfield for much of the season.

Perils of the age curve aside, many of the other objections to Willian are political rather than footballing. Mourinho buying in a man he’s already managed, who is of an age where there is little to no potential to grow, is a tepid way to approach an attacking signing.

There’s nothing there to give fans excitement – and, with fears that his output could drop off significantly once he hits 30, there’s real cause for trepidation – and excitement is one thing that United fans could do with.

The combination of uninspiring football and Manchester City’s dominance, played out in such a beautiful fashion, made the second-place finish in 2017/18 feel hollow to many.

Willian wouldn’t be a bad signing, he’d just be a mediocre and boring one.

Jose should look closer to home for the source of United’s malaise.